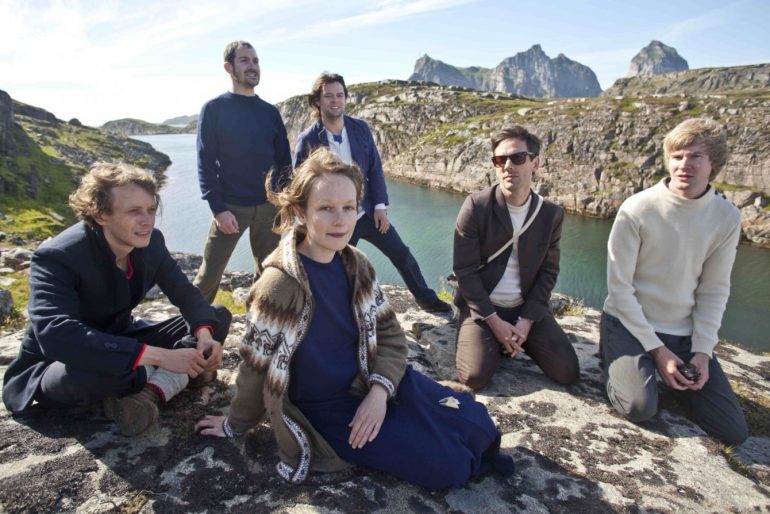 For almost two decades UK-based indie rock band BRITISH SEA POWER has been one of the country’s strongest and bravest institutions when it comes to intelligent and ambitious songs. There’s only a few groups today who manage to combine catchy melodies with a social commentary without sounding dull. They just released a truly satisfying new full-length called Let the Dancers Inherit the Party which is easily their best and sharpest release since 2008’s Do You Like Rock Music? And today we’re taking you right back to the band’s history from nearly a decade ago as they revisit their epic single Waving Flags once again. If you ask us, it’s still a big mystery why this didn’t become a huge stadium-filling anthem in the style of ARCADE FIRE‘s Wake Up. Waving Flags is a celebration of unity and human kindness against all opposing forces and since these themes are as important today as they’ve been back in 2008 (maybe even more, actually) it’s fair to revisit this  BRITISH SEA POWER classic today in the words of the band’s Yan Scott Wilkinson.

It was the end of 2006 and we were in Montreal recording at Hotel2Tango with Howard Billerman (drummer of early Arcade Fire) and Efrim Menuk (Silver Mount Zion). The recording was great but we ended up continuing it back in England and then also in a beautiful Czech studio outside Prague on the edge of forest with Graham Sutton (Bark Psychosis). So in a way the song was already quite well travelled and international in a sense. At the time there was a debate about Europeans, often East Europeans arriving in the UK and whether or not it was a good thing. It seemed obvious to us it was a good thing. It was great for culture and the economy and nice to hear different languages in the street.

We couldn’t really understand why people would be unhappy about this so we thought it would be a nice guesture to take our most pop single off the album and use it to welcome in these fine people and celebrate the loosening borders and mingling of nationalities.

This was a slow development maybe influenced by the wonderful recording locations, the multi lingual Montreal and ancient beautiful Czech forest. In the meantime we were freezing in sub zero conditions in Montreal. It was beautiful and icy but very cold even in the studio. Poor Woody our drummer even had forgotten to bring a coat but seemed to be ok with it. We managed to capture about half the record there but it was far from finished, hence the trip to record in a castle back in the UK and then on to the Czech Republic. It was here that the main riff took on epic proportions with an ad hoc choir of friends to boost it. Later this gave us the chance to bring in a whole other element in the form of the wonderful London Bulgarian Choir. We had heard them singing traditional Bulgarian songs and were big fans. It was great that they were happy to help us out on tv and at gigs and festivals by singing the choir parts in their own special way live. It seemed the themes of bringing European nations together for one big party had magically come to life in the real world. We were happy to standing for something positive as well as making music that brought joy to people. It had come a long way since Martin came over to my little flat in Brighton with his guitar and some melodic ideas.

Sadly today the UK has chosen Brexit and seems destined to go its own lonely way and Trump is building walls rather than knocking them down. People seem to be more fearful and divided when they should be coming together. Its not so good but hopefully things will be ok. It seems the song is more relevant now than ever and is a favourite for us and fans live, usually a highlight. It is one of our dearest moments and I’m proud of my part in it. A celebration of humanity and peoples similarities and differences, an ode to everyone getting along and having some fun and being nice to one another.