Build a longer table, not a higher fence! A Guest Commentary by DEN SORTE SKOLE 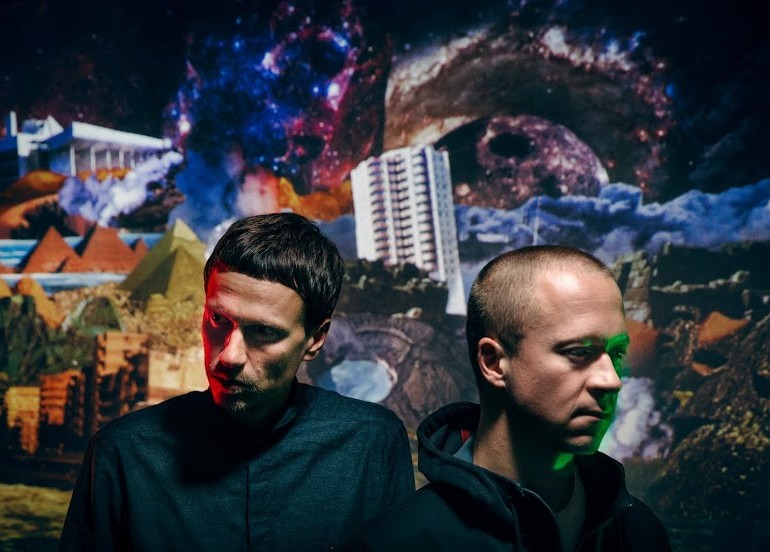 In light of recent events we at NOTHING BUT HOPE AND PASSION thought we’d like to address some issues that are clearly affecting us in our day to day life and that shouldn’t be ignored. Aiding us in our journey are Danish sampling duo DEN SORTE SKOLE. They have written a little something for us, to shed some light on how they see the refugee crisis, how the situation looks like in their home country Denmark and how, at the end of the day, it all influences the music of DEN SORTE SKOLE.

‘Build a Longer Table, Not a Higher Fence!’

On our way back from the last mastering session for our new album Indians & Cowboys, we stumbled upon these words written across the road: ‘If you have more than enough, build a longer table, not a higher fence!’. So simple, so true and sadly so far from the political reality of Denmark these days. Up here, politics of fear are dominating: The idea, that life as we know it, will end if we take in more refugees. The idea that our civilization is under threat. That our welfare system will fall apart if we don’t close our borders. That our responsibility for other human beings is ultimately restricted to the borders surrounding us!

But who owns this land? Who owns the borders of Europe? And who has the right to live in Denmark? We certainly do not feel that we deserve to live here more than a Syrian refugee family. Maybe it should even be the other way around. We have had our 35 years of safety, freedom and endless possibilities.

‘The conception of them and us doesn’t have to structure our future.’

It may seem far-fetched, but this is exactly the political point that our music carries: We are in this boat together and our future is inevitably interdependent. Iranian funk horns can play alongside Senegalese Sufi chanting and Italian throat singing. American drummers can play together with Syrian flutists and French chanson singers. The conception of them and us doesn’t have to structure our future.

But as it often is with utopian projects, they are faced with a different reality – the real world, built by real systems by real powerful actors with real financial interests! The problem is, of course, that our kind of music, built by thousands of sampled pieces, cannot exist within the legal systems of today. Impossible to clear, impossible to release! But who would – from a creative and musical perspective – argue that this piece of music shouldn’t exist. And that’s one of the central points that we hope to emphasize with this project – that the systems build to structure our societies are full of absurdities and blind spots.

In fact, the conception of ownership – property rights, intellectual property rights etc. – is one of the most fundamental but yet absurd and politically uncontested realities of our societies. It’s – no doubt – a structure that carries meaning and makes sense at one level. But it’s not as simple as that and there is a lot of incoherence at play here. For instance, the idea that we can price something in a way that makes someone the fair owner of it, is at best naïve. Our Nike sneakers most likely carry a price tag far exceeding the one we paid in the shop. Maybe some underpaid Malaysian guy got an inch closer to getting skin-cancer from stamping barefooted in the acid colour-baths colouring them. Maybe the air left for my grandkids to inhale will be even unhealthier from the air-pollution enhanced by the transporting of them from South-East Asia. Nothing carries a right and just price and the concept of fair ownership is surely not something that was invented by those at the bottom of our societies.

‘If this is our country, we can decide who lives here.’

The problem with this conception of private ownership is also that it reliefs us from responsibility. If this is my house, I can do in it whatever I like. If this is our country, we can decide who lives here. We have the right to decide if Afghan families can come or not. On the contrary if we had a shared conception of ownership, we would have to face our challenges together. 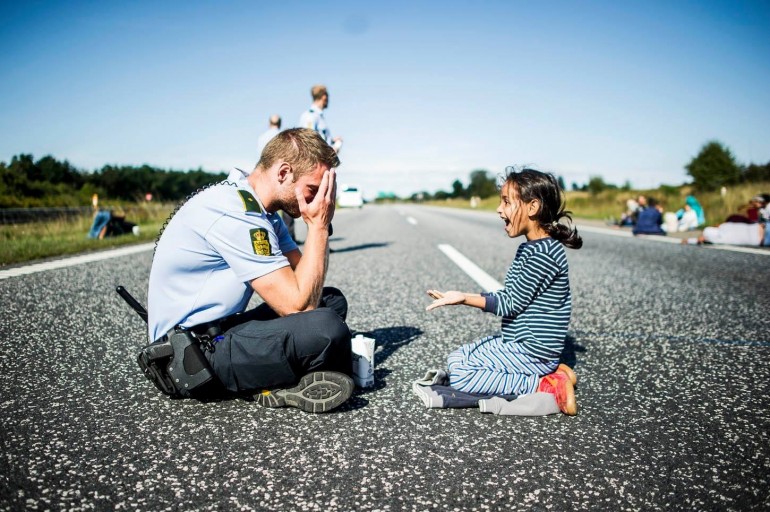 An image that made a difference. A Danish policemen played with a young Syrian refugee girl
(Photo by Claus Fisker/AFP/Getty Images)

Music shouldn’t have any boundaries

In regards to music another problem arises. Before big business and private ownership captured music, music was a practice alive amongst people. Songs would travel, transform and mutate from generation to generation. Music was a practice, an act in itself, not a commercial object. Music was something you did, together, without a purpose – or rather ‘just’ with the purpose of doing it. Playing music together. And this is perhaps the greatest loss caused by the music industry. Music has become a passive object of consumption instead of an active practice of living. It’s has become something we can own!

‘The Indians came first, and then came the Settlers and the Cowboys.’

And this brings us to the unusual order of things in our album-title. We deliberately chose Indians & Cowboys and not Cowboys & Indians as our western way of seeing ourselves, as the centre-point of all development would suggest. The Indians came first, and then came the Settlers and the Cowboys. And stole the land. But the Indians – like indigenous people around the world – didn’t even believe in owning land. Land is something that belongs to nature that you can borrow and treat respectful while you are here on earth. For us a clear analogy to the way we engage with our common musical treasury through sampling.

And right now, as we are writing these words, Amazon Indians in Brazil are fighting desperately to keep living on the land they have been living on for centuries, while we Europeans fight desperately to keep those dangerous refugees out of ‘our’ countries. Then, terrorists blow up Paris and media goes absolutely crazy, Facebook turns red, white and blue and we take a minute of silence here in Copenhagen to honour the dead.

It’s a fucked up reality we live in. And some even more fucked up responses that we are throwing at it. Maybe it’s true that the enormous amounts of refugees coming here will alter our welfare states and change the way we have been living in consumption luxury for the last half-century. But maybe that’s even good. Anyway, the only way forward is to face reality, deal with our hypocrisy and take action. And that of course extends far beyond releasing a sample-based album with a sophisticated title. 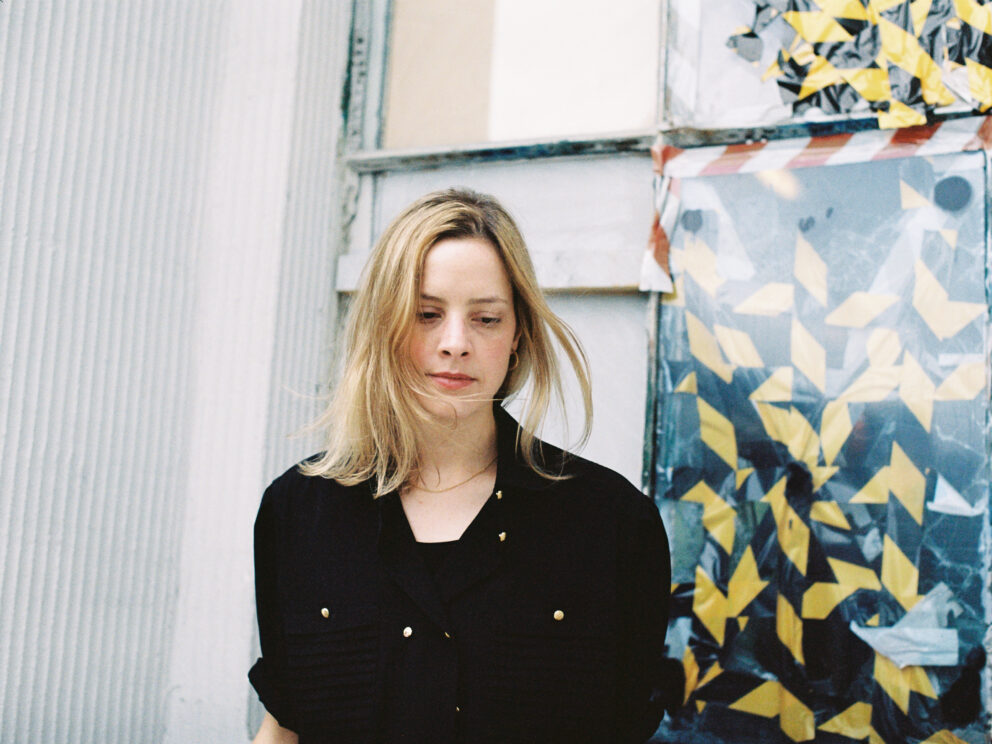