Have you ever wondered what it will feel like, when you die and stop to exist? For a brief moment, it might feel like being wrapped in complete darkness. This must be what nothingness feels like. At the same time, it’s impossible to comprehend. You are trying to come up with what it will feel like not being able to feel anything. It’s a contradiction in itself. The mind can’t help but go on overdrive. It’s impossible to imagine a total lack of feeling. Or the specifics of non-existence. A second later, you’re back to normal. You’re glad, almost ecstatic, to be alive right now. And once more, you forget about the fact that one day life is going to end for all of us.

When I watched an old interview with Tom Odell from 2014, he articulated the same sort of feeling and I knew I needed to speak to him to find out more about its link to creativity. Here’s our little chat about why it’s important to show you’re not alone in this and to share your feelings, about his third album Jubilee Road and if he is really sick of singing about his broken heart.

On the day of the release of your third album, you were saying ‘I can’t help but feel that this is the album I have been trying to make my entire career’ on one of your Instagram posts. I’ve noticed a lot of artists have said similar things about their third albums, that it’s the one they’ve always wanted to make. But not everybody might agree – including the fans. What drives an artist to make such a statement, and why does it happen with the third album a lot of the time? Do you feel like you’re at a stage in your career, where you’re a better songwriter than before or perhaps you’re particularly sure of your skills?

‘Yeah, I think so… Look, I don’t know if you get better at songwriting. I think I got better at everything else. I feel like I’m a better piano player now than I’ve ever been, I feel like I’m a better singer. It all doesn’t feel so elusive and bizarre to me now, so I just have more confidence, like you said. It’s easier to articulate my thoughts more clearly. With this one, I was finally able to also really get the production right and I don’t know if I always got that right in the past. I don’t think I have. This one really is much closer to how I intended it to sound. When I write the song, I have this sort of sound vision in my head, of what I want it to sound like, when it’s finished. You’re trying to get as close to that as possible and I’d say this time I got as close as I ever have. And I do feel like it’s the album I’ve been trying to make all those years. I don’t think everyone will like it, but I feel like it is the truest sort of music from me at least.’

Looking at the production side of things, especially on the second album, there seemed to be more experiments. The sound of your new album is closer to an overlying coherent sound, the songs seem to align more. How did the sound of this album come about?

‘I really limited myself this time, so it really is just me and the band playing on it. That’s the arrangement, just piano, drums, bass, a bit of guitar and some backing vocals. There’s really nothing else on the recording. I mean there’s a saxophone on a couple of songs. But the way I recorded it, we did a lot of the band bits live, the piano, the drums and the bass. It’s much more stripped back in terms of production and that was a major change between the second album, there was a lot more experimentation on the second album.’

How important is it to you to have your music evolve with each album, in terms of style and content?

‘I don’t really demand that of myself self-consciously, I just get on with it. I keep writing songs, I keep performing. I keep trying to listen to new music, I keep immersing myself in art and immersing myself with experiences. I hope naturally that I evolve as an artist, but I don’t ever think I self-consciously tried to evolve. I think if I was to do that, it would sound contrived. I always think that as an artist, the worst thing you can ever be is to not be honest and not be true. For me, that’s the biggest turn-off in any sort of art, when it doesn’t feel true.’

But isn’t there a sort of pressure from the outside to re-invent yourself as well as a lot of expectations for the next album to be something different?

‘I guess my philosophy towards art and music is, I don’t really believe too much in re-invention. I think for some artists it’s very important, but I am in no way trying to re-invent myself with this album. And I don’t think with the next album I’ll be doing that either. I’m trying to find out the truth. Ultimately, by trying to understand what it means to be a human being and to love and to lose and to fit in and to not fit in. With all those things, I’m just trying to get to the truth of that and write about it along the way. I guess I’m not a very progressive artist, I’m not trying to re-invent myself. Everyone aspires to be like David Bowie, but I’m not like David Bowie. I admire David Bowie so so much, but I guess I don’t share that desire to re-invent myself with every album. I guess it’s why he was a much better artist than I am. It’s funny because I have these great arguments with a very dear friend who is a visual artist whether as an artist you should be re-inventing yourself. But I don’t think an artist should have to do that’

For me it’s driven by empathy, I want to see what it’s like to be someone else, what it feels to be them.’

Your music has changed though. You started making music and put out your first album when you were much younger, so perhaps the changes are just a reflection of growing up?

‘Certainly, I couldn’t agree more. Yeah, there’s a natural evolving going on. I just don’t want it to feel forced, I want any change to be there naturally.’ 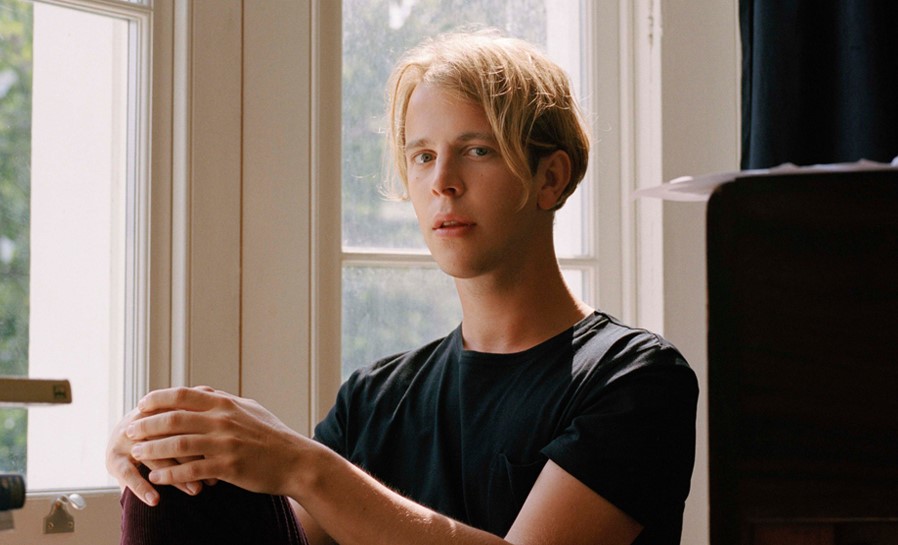 ‘I’m Sick of Singing About My Broken Heart’

Your merch says ‘I’m sick of singing about my broken heart’, which is a lyric from one of the songs on the album. Are you really saying that there should be fewer songs about heartbreak?

‘I think that lyric is sort of breaking the fourth wall, in the sense that it is slightly taking the piss out of myself because I am renowned for singing about my broken heart. I guess I’m saying to myself that I’m aware of that.’

However, I do think sad songs are important, don’t you think so? Happy tunes are able to fight a bad mood, but you’ll usually listen to them when you’re in a good mood and then they uplift you even more. But when you feel sad, for whatever reason, you go to music for guidance. Ultimately, there seems to be so much more meaning in sad songs. How do you rate the importance of writing happy tunes versus sad songs?

‘I think on an album you want to have a split between the two, but I don’t think it’s just happy and sad, there are more moods than that. There’s melancholy. There are tense songs. It’s less black and white than that. In terms of the colour of it, I’m always more drawn to the melancholic feeling, because they’re often so much richer and the colour is so much deeper. I’m always compelled, really, I’m drawn to those emotions. What I would say is, whilst I think my songs can be inherently melancholic, I wouldn’t necessarily call them always sad. I wouldn’t always call them pessimistic, I would say often they’re optimistic. They’re celebrating the imperfections, the sort of cracks. They’re saying, it’s okay to be sad and it’s okay to feel this way. Because I think there’s nothing more terrifyingly lonely about feeling sad and feeling that it’s not okay to feel this way. So many of us will always feel sad and will always feel melancholic. Some of us might feel like we don’t fit in and some of us will feel lonely.’

And do you feel like art in any form helps to process all of that?

‘For me, ultimately, it’s quite basic. It’s just communication and I think it’s the same as when someone gives you a ring and shares their feelings. You look to them and you say ‘Oh, I feel that as well.’ I think it’s the same in literature, when I read a phrase in a book and the author said something, it could be the most random thing in the world, but I’m like ‘Oh my God I thought that my entire life!’ For that moment, I feel infinitely less lonely. I feel like I have a friend. It’s the same with music, when someone says something or sings something that moves you in the sense that you can relate to it and I think that’s the most wonderful thing about music.’

I’ve seen this old interview, where you talk about what it feels like to realise that life isn’t endless as well as what a strange and uncomfortable feeling that is. Do you think it drives you to be more creative and thereby make life a bit richer?

‘Totally, it completely comes from that. I guess I’ve always had this slightly insatiable thirst to feel and to live and I think that’s why I make music. It also comes from my desire, my love of life. I genuinely really love it and I appreciate it. I am aware that it will end and it will end for all of us. I think that’s what makes it so beautiful, because if life was to have no limits, if it was to have an infinite span, then I think the beauty would disappear from it.’