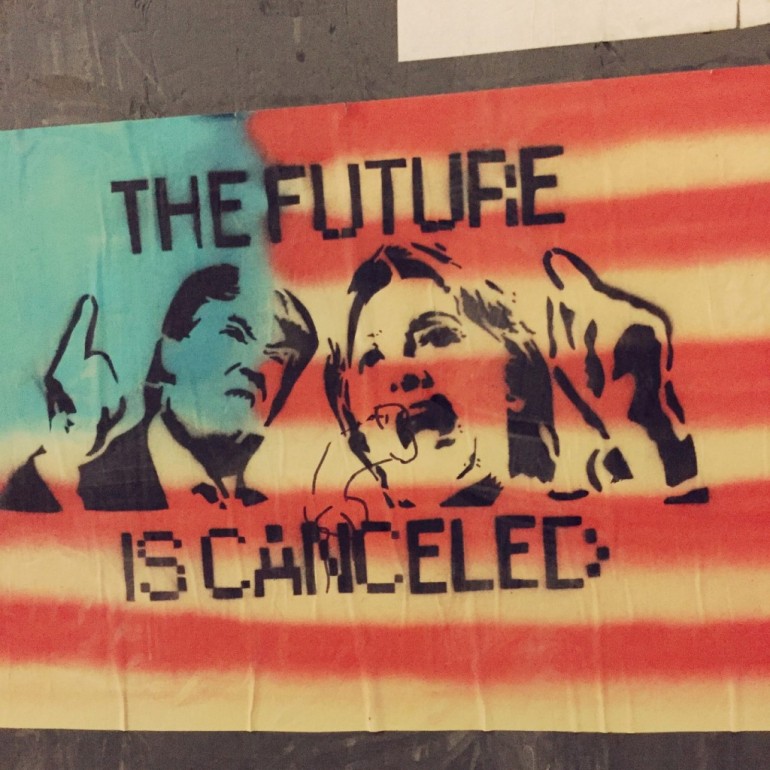 On and off throughout Election Day, I received a flow of condolences.‘I’m sorry that your country chose him.’ ‘I’m sorry that bigotry won this round.’ ‘Sorry to hear about the states.’ These condolences were always coupled with disbelief. ‘How could this happen? I can’t believe it.’ ‘Someone has to intervene, right?’ I find myself surrounded by people, Americans and internationals alike, who are shocked by the result. What disturbed me the most was to find I wasn’t shocked at all. Disgusted and upset? Yes. But surprised? Not much at all.

I have watched the same rhetoric circling around each candidate, recycled over and over for the entirety of this election cycle. He’s the misogynistic, racist pig. She’s the stoic politician with a faulty track record. From the general population, there wasn’t much fire for either. He discredited himself with his blubbering bigotry and she with her failure to gain the public’s trust. Trump was seen as the potential for radical change or as the racist white supremacist that had virtually no governmental experience. Clinton was seen as the continuation of progress or as another four years of hidden emails, policy flip-flopping and establishment politics. It resulted in the ‘lesser of two evils’ argument, with neither side being able to fathom the opinion of the other.

Far too oligarchical for something called a democracy

However, this was an election that moved so far past a ‘lesser of two evils’ play. It became a fight between the side of morality, hope and tolerance and the side of layered discrimination, ignorance, and, at its core, selfishness. That’s not to say I don’t understand the handful of reasons for his defense. People are fed up with our political system and the fact that two political families have almost solely ruled the system for the last two decades, making the whole thing far too oligarchical for something called a democracy.

They’re tired of being on repeat year after year. Jobs continue to get sent overseas, health care premiums keep increasing, and families continue to live below the poverty line. It is not only racists and unswerving conservatives, who unfortunately make up far too much of the country, that have elected Trump.

It is also the workers who feel they have been cheated, the wealthy who rub their greedy hands together as they wait for property taxes to drop, and, bottom line, the white electorate who were the only ones to escape Trump’s hate. It was a country who could not stomach electing the Clinton alternative, even if that meant denouncing the human rights and forward progress we’ve finally started moving towards in the last decade. 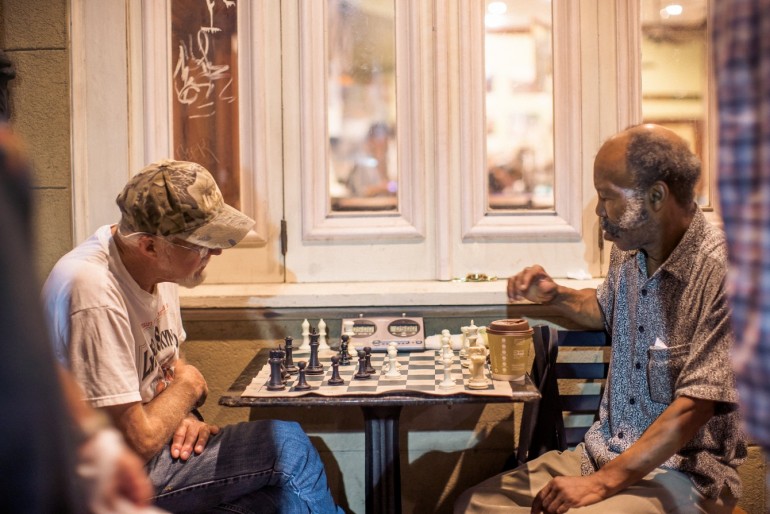 Selfishness and arrogance at its core

This is not only a question of a flawed education system or an overtly racist society. This is selfishness and arrogance at its core—whether that’s based on wealth, on race, on preserving your country the way it was in some imagined time. Voters have chosen to protect their wealth, the white middle class and their broken ideals. Unfortunately, this sentiment did not stay contained in the backwards states, hindered with terrible education programs and deep seated racism. Trump support progressively trickled into my own back yard, into the doors I grew up in and into the kitchens of my neighbors in California. It increasingly warped the outlook of my own family from ‘He doesn’t stand a chance’ to ‘Hillary isn’t much better’. And these aren’t the rifle-bearing rednecks you imagine to be Trump supporters.

They may not have been motivated by discrimination, but they overlooked it, and that says enough. They may not be screaming racial slurs from the rooftops, but they stand aside and watch it happen.

By voting for Trump, Americans have shut the door on forward moving minority acceptance, global warming prevention, and on advancing women’s rights. The white and the wealthy chose themselves when they had the chance to reassure millions of citizens ‘You belong here just as well’.

I understand that he stands for something different—a break from establishment politics and the potential to veer away from the frustration they face. I understand that people are fed up and want the America they grew up in. However, I will never be able to understand how that’s worth sacrificing the hope and acceptance of the other half of the country.

If the vote was cast to go against establishment politics, then congratulations, you have officially gone against it. America, you have successfully elected a reality star and real estate mogul to the highest office in the world. You have gone so anti-establishment that you have elected a man with not even a single day of political or military experience to show for it. And what have you accomplished by choosing this candidate? You have confirmed to the rest of the world that we are in fact a racist, backwards society, hostile towards immigrants but ironically made up of them.

‘I am sad that I didn’t fight as hard as I possibly could to prevent this from happening.’

I apparently live in a little liberal, optimistic bubble, having graduated from Berkeley and having lived in Berlin the last few years. Over the last months, I have only been surrounded by the denouncement of Trump, whilst the Trump supporters stood silent by the wayside, waiting to cast their vote in private. There was a sort of shame and disquiet from the educated Trump supporters. While anti-Trumpists rallied loudly against the candidate, those for him came up with ‘Hillary isn’t much better’ or failed to voice much opinion at all. There is a reason the educated Trump supporters have shied away from the spotlight and outward opinion. Their vote was selfish and self-interested and ultimately a willingness to overlook the value in any minority within America’s borders. 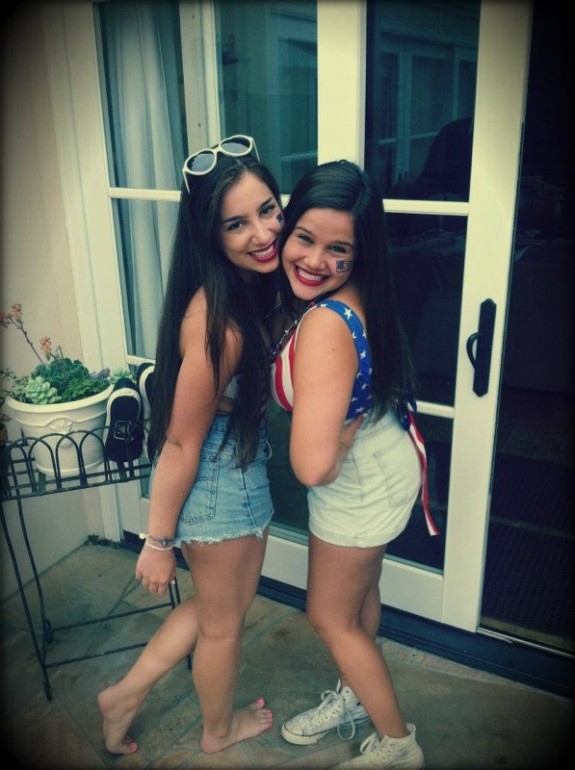 Nearly every educated figure head went against him and it became increasingly more ridiculous to voice their support of him. However, they wished to protect their wealth, their race, and their America as they once knew it. They could not manage to trust in another Clinton presidency, even if the alternative was a demagogue. Of course nearly every poll called the election wrong and were skewed to favor Hillary! One wouldn’t think that people would be compelled to misconstrue their voting intentions. If a person is willing to elect a man to the highest office, they should be able to stomach that and proclaim it proudly, right?

I woke up on Wednesday morning feeling like I no longer identify with the place where I grew up. I started to consider the possibility of a CalExit, but realized that even that wouldn’t help to remove me from the Trump voters. I will continue to live in Berlin, and will continue to grow farther apart from a community that sets off fireworks at the sound of a Trump presidency. However, I cannot fathom the sense of loss of those who grew up there, whom the country has openly spoken against.

I am sad for Muslim-Americans, for Mexican-Americans, and for every shade between black and brown that is hit by ruthless racism in this twisted country. I am sad for every woman trying to claw her way up in the work force and maintain the right to make choices over her own body. I am sad for the LBGT community whose rights were delayed far too long already and now have the potential to even lose that.

And I am sad that I didn’t fight as hard as I possibly could to prevent this from happening. It feels like we was set up for loss from the beginning, with no choice that came close to what we needed, but I could have done more. We all could have.

I am disheartened today but working to remember that millennials overwhelmingly chose acceptance and progress. When less than 10% of the nation’s youth caved in to this fear mongering, it gives me some sort of hope for the future. We make up the country. Trump does not. And it’s our turn to make the change, so stand up and fight for what you want.

🇺🇸❤️I want to live in a #CountryOfKindness #LoveTrumpsHate He divided us so carelessly. Let’s take care now of each other.