Seconds into Porridge Radio comeback single Back To The Radio, the world falls apart. Distorted guitars, a field recording, and an unruly violin engulf the listener like a storm front. As singer Dana Margolin enters the song she sounds apprehensive as if walking over broken glass. If you’re looking for answers you’re in the wrong place. This might as well be the mission statement for Porridge Radio, whose songs circle around fighting anxiety, trying to be better, and, more often than not, failing at all those things. As their brand of raw and earnest indie rock is reaching an ever-growing audience, Margolin and company released their third album. Waterslide, Diving Board, Ladder To The Sky is a heroically sad record that once again tries to come to terms with the burden of being.

Be assured, then, that the real Dana Margolin is infinitely more chill than her music would suggest. Talking to her on a muggy Berlin morning, her answers are observant and unguarded. As we chat over a massive supply of Haribo’s, she opens up about the sound of the new record, interacting with fans, and finding understanding in others.

Time To Get Personal

One thing we both agree on from the start is that the new record marks a departure in sound. The trademark riffs and raw energy are still here, but the songs are noticeably less guitar-led. Flowers and Jealousy hum along on bleak piano figures, while The Rip employs a synth line that recalls Roxy Music. For Margolin, these changes were a natural evolution for the band, as well as a necessary one:

This strife for change is audible in the final product. The record largely does away with the loud choruses and big emotions that have become a sort of calling card for the band. Catharsis is traded for long stretches of quiet tension. The big emotions are still here, but they simmer under the surface and give songs like The Rip an itching and anxious quality. Margolin says the two words that came up during the making of the record were “soft and spooky”. And there’s really no better way to describe the way the record crawls under the listener’s skin. 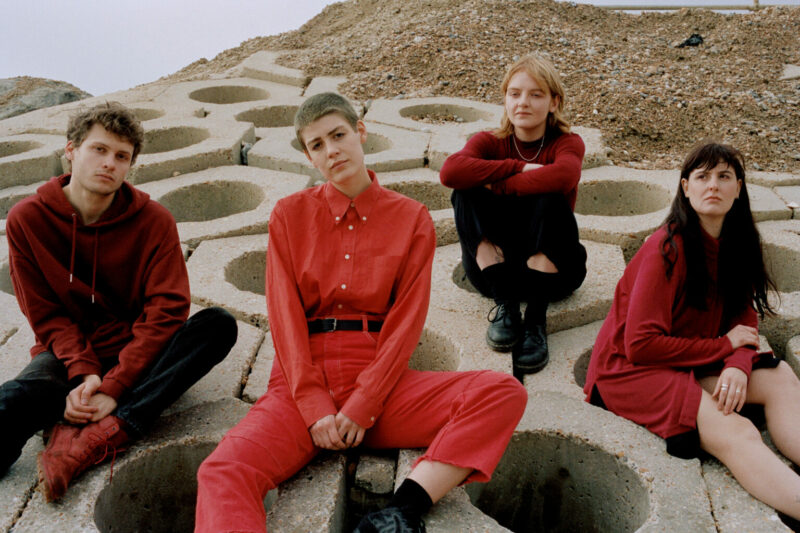 Still, you would never think that this was made by anyone but Porridge Radio. A reason for this is the idiosyncratic soundscape the band pulls off so seamlessly. Carefully constructed melodies are marbled with moments of rawness and spontaneity. Expertly captured sounds are juxtaposed with field recordings and odd snippets. There is a noticeable element of tinkering to the songs creating the impression that this is less a product than someone’s project, full of individual touches. Take, for example, the weird percussion at the beginning of Back To The Radio.

“That is the bins being collected outside my bedroom window on a Wednesday morning. Something that sounded chaotic. It’s like a horrible, beautiful sound.”

There is something paradoxically comforting about Porridge Radio‘s own brand of chaos. It gives their output a homemade quality that can feel incredibly personal once you notice it. It’s in the handmade masks in the video for The Rip, it’s in the watercolor paintings in the video for End Of Last Year, and it’s all over the songs in the form of snippets, field recordings, studio wizardry. Someone sharing themselves through art, and inviting you to interact with it. It makes sense then, that Porridge Radio in its earliest incarnation was just Margolin going to open mic nights. The idea of putting yourself out there under the eyes of strangers still runs through everything the Brighton quartet share with the world.

This aim of connecting through art naturally invites a close relationship between artist and listener. To some degree, Porridge Radio and Margolin specifically embrace close contact. Case in point: If anyone feels inclined to send Porridge Radio anything of their choosing, they can send it to Dana Margolin, Suite 140, 372 Old Street, London, EC1V 9LT. If you think this is doxxing, be aware that Porridge Radio have chosen to include this information on most of their social media. As one dumbfounded interviewer expresses sheer unbound horror at the idea of strangers not only knowing your address but also sending you stuff, Margolin just grins and shrugs: “I wanna see what people make” is all she has to say on the matter, and it sounds like she means it.

Of course, it is not that easy. Musicians everywhere are constantly walking the tightrope between embracing their fans and reminding them that they are still individuals who don’t have all the answers. This can sometimes creep into the music in nasty ways. Just look at the way at the way the music press poured over every line of Radiohead’s A Moon Shaped Pool to have it fit with singer Thom Yorke’s divorce. Or look at the way Idles spent an entire press circle defending themselves against accusations of class opportunism. Margolin, however, isn’t all too worried:

“I used to worry about it more, but now…I choose what I share. Sometimes it’s overly personal, but I’m going to do it anyway. It’s important to make myself scared and vulnerable, because that leads to connections. You make yourself vulnerable and you communicate something and once you’ve communicated it, you’re open to connection. It doesn’t matter whether I’m terrified, because the whole point of it is to be terrifying. Everything you do in life is embarrassing.”

Waterslide, Diving Board, Ladder To The Sky is full of this idea of connection through vulnerability. It’s achingly sad and personal record, full of stories of someone trying and mostly failing to be a person they can be proud of. The songs don’t romanticize the hurt but they also offer no antidote for the many, many ailings. This can make for a heartbreaking listen at times, not helped by the fact that the writing is absolutely outstanding. Every musician has at some point scribbled down a few lines about depression, but few have hit the spot quite as hard as Margolin does on End Of Last Year:

“Cut off my Shoes
Instead of taking them off
Cut off my hands
Because they’re itching so much
Talk to myself
Cause I’m getting so blue
Do you know?
You break everything you touch”

This is where the quiet nature of the record comes back with a vengeance. End Of Last Year eschews big choruses and buzzing guitars, instead running on a twitchy tremolo guitar and sparse, somber piano. There are instances where the rhythm section tries to push the song forward, only to fall back in its own sad march. For the first time in their career, Porridge Radio sound genuinely hopeless. Similarly, The Rip’s central mantra – “And now my heart aches” – would sound exciting with pummeling drums and guitar behind it, but curiously, it is the only moment in the song where the band pulls back, making the words sound barren and dislocated. The heart aches, and it sounds like it will continue for a long time. If all of this sounds dark it’s because it is. Waterslide, Diving Board, Ladder To The Sky is uncanny in its ability to portray states of hopelessness, passivity, and sadness. There are still moments of light and catharsis – this is Porridge Radio, after all – but once you reach the title track, you know there’s no happy ending.

It is tempting to read the words, incredibly personal as they are, as some sort of emotional undressing, but those willing to look will find a wordsmith expressing very difficult feelings in a universal language. The power of Margolin’s words comes from the fact that she is able to move beyond the internal and to investigate different perspectives within the same experience. Despite its almost claustrophobic intimacy, the songs of Porridge Radio are full of little social interactions, snippets of conversations, hearsay, voices of characters that seem to circle around the narrators without ever really connecting to them. The Greek chorus of Porridge Radio’s tragedies are the exes, siblings, parents, who become surfaces the narrators can reflect off.

“I can only understand myself when I see myself reflected in others. My sense of self comes from my relationships and the ways I perceive other people and what I project into them and what they project into me. You go through life and you make experiences and you’re making things and everything’s going to feed into that. And you have creative license and you take all those things you have experienced and can be creative with them.”

This sense of distance and reflection is key to understanding Margolin’s writing and why it’s so special. Porridge Radio’s songs somehow capture both sides of the everyday experience – the overwhelming part that makes it hard to leave the house sometimes, but also the distant part, the smart observer, that has been here before and is too tired to panic. There’s an adult distance within the songs, the idea that your world breaking apart might still not make you special. Take I Hope She’s Okay 2: On the surface, the narrator relishes in a significant other: “I associate you with good things”, Margolin howls over and over again, as if she herself was surprised by her feelings. But at the same time, there’s the sense of déjà-vu and diminishing returns. Falling in and out of love, the words seem to suggest, is at the end of the day just part of the deal. The heartbreak is as much part of the experience as the first spark, and just as predictable: “And don’t you have something to tell me? And can’t you imagine / Anything at all?”

This is where the light seeps back into the music: Porridge Radio give you the feeling that we have all been there. They are both your little brother and your older sister. They are your friend, but they are the sort of friend that tells you to please get a grip. If there’s a lesson in Waterslide, Diving Board, Ladder To The Sky and Porridge Radio as a whole, it is that life keeps happening, and that the only thing one can do is keep trying.

Porridge Radio’s album Waterslide, Diving Board, Ladder To The Sky is out now via Secretly Canadian.