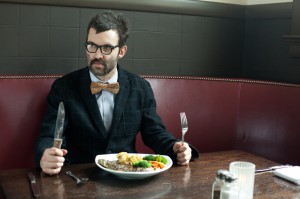 Indie-rock legend Mark Oliver Everett and his band EELS report back with a new longplayer soon. The man – who is also known under the alias E – will release its new album The Cautionary Tales of Mark Oliver Everett on April the 21st. It’s the 11th album by Everett and it follows Wonderful, Glorious which was released in early 2013. The mastermind describes the new album as “an extraordinarily vivid and intimate document of a personal struggle.” Makes us quite interested in its content. You can enjoy a first trailer for the new EELS album below.