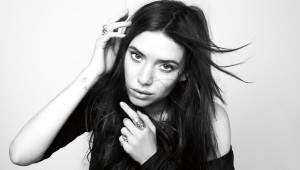 Pop singer LYKKE LI unveiled a song called Du är den ende (You Are the Only). It appears on the soundtrack for the Swedish action thriller Tommy and is not on her new album I Never Learn that is due to be released in May.

Tommy is about one of the biggest bank robberies in Sweden’s history and LYKKE LI herself plays a role in that movie. It was directed by Tarik Saleh, who also directed the singer’s videos for I Follow Rivers and Sadness Is a Blessing.