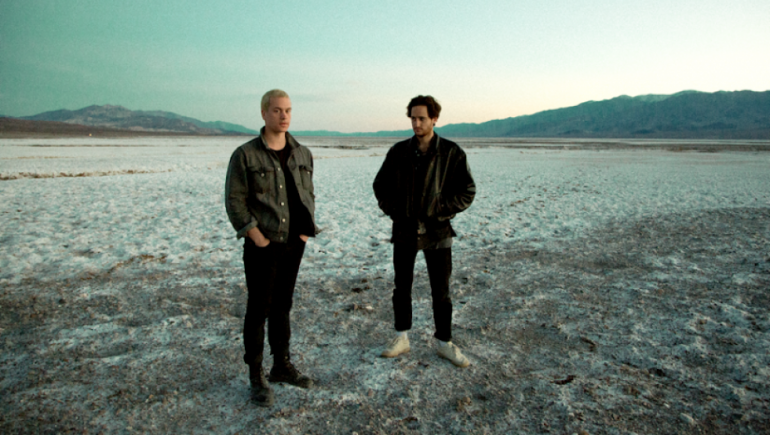 Ever since we witnessed LEA PORCELAIN‘s appearance at last year’s EUROSONIC in Groningen we eagerly awaited their debut album. To apply some more pressure we even put them in our class of 2017. Now, finally, the Berlin/London two-piece post-punk/wave connection fulfill our expectations: Hymns To The Night is the title of their first full-length and it will be out on June 16th. Already today you can listen to another new song from it, called Remember – exclusively available here on yours truly. It’s a more slow-paced piece than the previously released Bones but it definitely inherits the kind of cheerful melancholy and gloomy atmosphere we came to love from Julien Bracht and Markus Nikolaus.

Before you directly hit the play button here are some more background infos from the  LEA PORCELAIN boys themselves regarding their debut record Hymns To The Night:

We’ve been waiting for your debut album here since we saw you in Groningen over a year ago – what took you so long?

We remember it very clearly. The 2 gigs in Groningen, especially the one in the ‘News Café’, were in some way the birth of LEA PORCELAIN. We had just started working with our favorite management company in London, solidified our live show right before christmas and returned into the year with a bang. 3 days later we got an offer to release an EP with KOBALT UK. We then took a full year to play gigs around Europe and the UK, earn our stripes, were offered various label deals and wanted to be a bit patient with it and a little smart, so that things wouldn’t get fucked up. We also put a team together ourselves for the album realase in co-op with our mgmt and decided to select further songs out and bring new songs into the 12 tracker. Eventually we decided to stay with Kobalt in the UK because they are great and they were the ones we trusted the most. And also because you don’t have to trust them at all. You’re the boss. You found your own label, you start a business, take risks, work extra and Kobalt partners with you in that. So, that was a bit of work. Then we self-directed all our music videos, prepped the album, mixed it again in a Studio in West London and then, when we thought, we couldn’t do more less it’ll do harm – we felt like we finished our debut. We were probably just careful with everything and to be honest, time has flown since the basement blast where you saw us and Eurosonic still feels like yesterday, because we were somehow flying through time. The Funkhaus is probably also a reason for that. In there, we don’t feel bound to time at all and that’s probably why we like it there so much. Our main-priority in music is timelessness and not following a trend or jumping on a wave and an ‘en vogue’ sound. And clearly, that takes time. But we believe this will make LEA PORCELAIN last much longer… And that’s why we take our time.

Has Lea Porcelain been your full-time-activity during this time?
Yes!

How has it been recording the songs in the legendary Funkhaus Berlin and how did you end up there in the first place?
Well, we started traveling more and more to Germany even though we were still living in London and it was tough. So, one night, Julien’s parents invited us to Germany and we had actually been speaking that night about moving. We had tried to get into the Funkhaus previously, but it hadn’t worked out yet. That exact night Julien’s parents neighbors came around to say hello because they had just moved in. It turns out the guys’ best friend had just bought the Funkhaus and was about to start something absolutely insane there. New artists, old places anew, booking, parties, lifestyle, everything. We went to Berlin immediately, met the guy and needed to convince him in ‘you got two minutes’. Two minutes later we became a part of it. From then on we did 99% of all live videos, photo shoots and meetings there. It’s our base. Recording there is fun, you can feel the energy. The night we wrote A Faraway Land – we wanted to celebrate because we were in such a good mood, so went down to see what was going on and caught Grandmaster Flash playing a massive DJ set. At that time we didn’t know it but we had finished the album that night. Remember was recorded the night before and we just kept on writing more. That’s what I mean with the Funkhaus. Sometimes, especially on weekends, time becomes a relative thing.

You’ve always alternated between London and Berlin – which one is it for you right now and for how long?
It’s always 50% home – 50% heart. London is in some way our spiritual home. That is where the musics at, that’s where we have learned the most. Back to back with all the british bands, cramped in a tiny backstage, no food, just cans and water and a lot of ‘take it or leave it; MATE!’ responses. Being thrown on stage and brushed off again and literally getting so little cash that you have to pay to play your gigs at the start. But every time we’re absent, we miss ‘London and even all these gigs one has to play to get a name. It always tests you asking: ‘Do you really want it?’ Half of our heart is still in that town and will probably never vanish.

But Berlin. Berlin. It’s just something else. All our English friends who may even feel ashamed about their country’s Brexit, we tell ’em to come.

Because Berlin is for the wicked, for the lost, for the lonely and awesome people this planet needs and it still got space.

So, right now it is Berlin because we haven’t been involved in something like the Funkhaus before, the club scene is still rambling and even though the prices are a lot higher than years ago, there is still space to explore. London is very cosmopolitan and we like that but we also feel that there is a progress in Berlin happening and that is where we want to be. Although, in the near future, you will probably find us in both towns just as often.