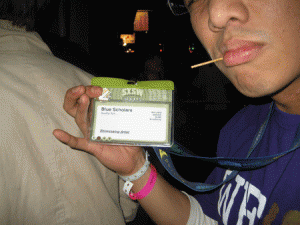 We can’t be sure, but we think there is some kind of musical thing going on somewhere in Texas… Austin possibly? You guys heard of this? Man, it would really reflect poorly on everyone who loves new music and was missing out on some kind of cool, cutting edge, indie, fingers-on-the-pulse up-and-coming band showcase. But then we heard that KANYE WEST and JAY Z played Niggas in Paris no less than three times at the Samsung (see what happened there, some major brand name dropping) sponsored show at Austin Music Hall. KANYE told you not to let him get in his zone, because what happens when he gets in his zone!?!

(Now, this reminds of an fable. A fox notices a bunch of juicy, tasty looking grapes hanging on a vine. After trying and failing to get the grapes down, the fox claims he didn’t want them anyway and they were probably sour. Hence, leading to the expression: that’s just sour grapes.  We are sharing this anecdote, realizing it has nothing to do with the current situation.) 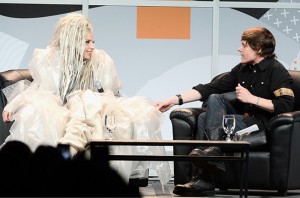 The earmark of showcase festivals is that they operate on the good, the bad and the ugly principle: everyone gets a shot and the audience picks the winners. But what does it mean when the odds are so heavily tilted in certain favors, as is the case now? With heavy promotion, viral campaigns, and big name acts, any little independent light is going to obscured and invisible next to the huge spotlight of established stars.  Austin bills itself as the live music capital of the world, and in it’s early days SXSW took place everywhere: the convention center, concert halls, bars, backyards and garages.

The DIY principle was key; if you build it, people would come, and hats were passed around to raise money for the bands. You may see a lot of go-nowhere musicians, but you may catch something transcendent and ultimately lasting. Fragile gems like outsider musician DANIEL JOHNSTON played SXSW. Comedian and actor Fred Armisen got his start there in a short film that played at the concurrent film festival. Don’t get us a wrong, plenty of good can come from SXSW. Yet when fairly major acts like COLDPLAY (brought in by Apple) or KENDRICK LAMAR headlines, or Mike Tyson is there promoting an app, can anyone really distinguish the music from all the other loud, offensive product being pitched? And then there’s LADY GAGA discussing… well, art, herself and the bad state of the music industry. Right – her. The poor little indie songwriter. How sad, Mrs. Germanotta. SXSW seems like a many headed hydra on steroids: each head hungry and ridiculous and out of control. Could maybe be best described by the incident at the TYLER THE CREATOR show on Thursday, which was was completely overcrowded. Still he encouraged people to rush in. Too much of everything. During a car accident at the SXSW this week two people lost their lives. The hydra was out of control.

We realized: maybe South by Southwest (aka SXSW) has become a major, commercialized corporate shindig masquerading as long-ago-lost indie grass roots music event. Then we re-watched this brilliant and still witty video by THE SPINTO BAND. Yeah, those people with badges totally deserve to cut in line.