Meeting Alvvays: Why it hurts to care about things 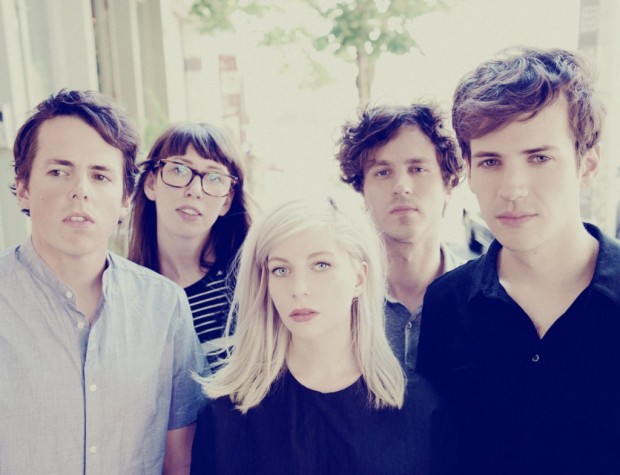 With their 2014 debut Toronto-based five-piece ALVVAYS have really hit the zeitgeist. In this complicated world the retro sound of their deliberate, dreamy indie pop brings back a vision of romance, innocence and sweet melancholy – things that come up short these days. That doesn’t mean that the band doesn’t notice what’s going on in the world as the conversation with lead singer Molly Rankin and guitarist Alec O’Hanley proved.

Where are you working on new songs?
A: We have a nice basement where we live. Fortunately the neighbour upstairs is very accommodating with us jamming in the basement and making weird noises.
M: It’s nice to be able to fight in your own space.

Are there big fights during the working process?
M: Yeah.
A: Yeah. The process isn’t as pretty as the product. But it’s all to serve the songs. You do your best to detach yourself emotionally from what’s going on and just be objective.

I imagine it being quite hard because you are not only band mates but also friends.
A: The best way to ruin a friendship is to start a band together. But we’ve somehow managed to sidestep that and we are all pretty reasonable people. We know each other’s buttons. Some songs just come together easily. Other ones don’t come to flourish without a lot of blood, sweat and tears.

It seems that the people writing about your music have a hard time to categorize you. Some say your music is like the early sixties, some think it’s seventies or late eighties and some mention the nineties. So what are the decades that inspire you?
A: All those decades and also the early 2000s. We love THE STROKES but we also love SIMON AND GARFUNKEL, R.E.M. and ABBA. We just take it all in and hope it comes out sounding like something that doesn’t belong to 2015. We recorded to an old 1981 8-track Tascam recorder.

Would you have liked to live in one of those decades?
M: Yeah. ’75 to ’85 is sort of where I see myself enjoying myself.
A: The sixties are pretty romanticized. They would have been cool. Right now we seem to be at the bottom end of a conservative pendulum and we are just praying that it swings back in a reasonable direction. We have our conservative prime minister Stephen Harper for too many years and he’s a total asshole. You are not supposed to insult your politicians abroad, but whatever.

What do the words hope and passion mean to you?
A: Apathy is the norm and the expectation these days. We are passionate people. It’s good to give a fuck.
M: But sometimes it’s depressing and it hurts to care about things, for instance the state of the earth. You should remain hopeful and optimistic and still invest yourself emotionally in things that matter.
A: We have listened to a JOHNNY MARR interview the other day and he said THE SMITHS often got questioned why they were political. His retort was: ‘Why isn’t your band political?’ It’s not on the passionate to justify their passion, it’s on the apathetic to justify their apathy. When people say they are not into politics, that just means their politics are their status quo which is basically conservatism. We don’t accept that.

What are your plans for this year?
A: We’ll be on tour with our record for instance on some big festivals in England and on SXSW. Apart from that it would be nice to go somewhere on vacation or be at home for a while. You lose everything when you are on the road, whether it’s like not maintaining your relationships back home or me leaving my suitcase in a British petrol station and having to live out of an H&M-bag for the rest of the tour.
M: He does it all the time, don’t feel sorry for him.

Have you gotten it back?
A: Not yet. In Paris I think it will magically appear.