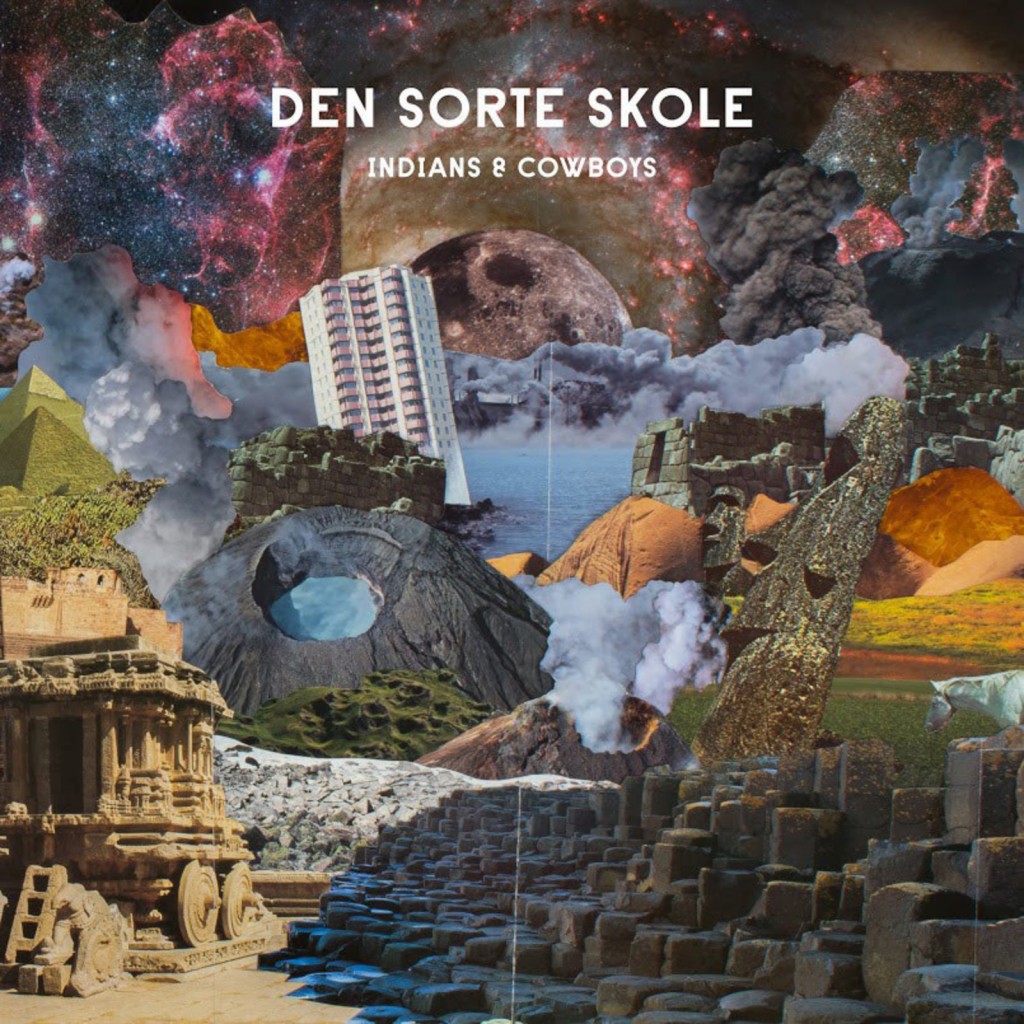 The art of sampling is still one that doesn’t receive the credit it deserves; especially when it’s done pretty well. ‘Credit’ is a good keyword right here, because the situation with the legal rights remains a tricky one up to today. Just ask Pharrell Williams and Robin Thicke with that whole Blurred Lines case. ‘The system favours the big corporations, layers and the biggest musicians,’ told us Martin Højland back in late 2013. Together with Simon Dokkedal Mr. Højland forms DEN SORTE SKOLE. The Danish duo might be one of the most exciting artists at the moment, creating a truly unique sound, all based on samples. Intense live shows, for example as support of fellow countryman TRENTEMØLLER, and their praised three-part long Lektion series already gave them the status as an insider’s tip. It’s music for music lovers, sound fetishists and those who love to discover all different sorts of things. The duo’s latest album Indians & Cowboys underlines this status. DEN SORTE SKOLE are the most interesting act, based on samples ever since THE AVALANCHES went into indefinite hiatus over one decade ago.

Indians & Cowboys is an exotic trip into the microcosm of those two Danes. Based on samples from the global history of music the record features elements lifted off more than 350 old vinyl records, from 75 different countries and six continents. Those numbers itself are stunning on their own and it’s even more fascinating that the duo only used vinyls that were released between 1956 and 1996. It’s the sound of the world from over forty years. But it’s not our well-known Western pop musical microcosm. The cultural heritage of this planet is far richer. Expect traditional horns from Iran, distorted flutes from Syria and Turkey, weird old analogue synths from ex-Yugoslavia, throat-singing from Italy or maybe even sufi-chanting from Senegal. There aren’t any limitations in the world of DEN SORTE SKOLE. Everything is music, everything can be part of music.

Although Indians & Cowboys is divided into thirteen single tracks the listener needs to understand the concept as one big picture where each single piece builds up on the other one. The result is a haunting 78 minute long piece of exciting music that is full of surprises. Stone might start the record with mysterious bells and baleful mumbling but soon surprises with a grooving oriental beat. Kalaidon and his dark soul vocal samples make the song sound like a weirder version of NICOLAS JAAR‘s side project DARKSIDE while a tune like Humani surprises with a tornado of vocal samples and a powerful four-to-the-floor beat which arrives out of nothing. Far too often it’s hard to tell where a specific song end and another one begins. Lowmax, one of the album’s highlights, might start with gentle guitar play and sweet blues vocals at the beginning but later turns into a glitchy and noisy monster that makes its way with the help of a pumping beat. Thank god, the following Osian turns it down again. But yeah, this is what a usual DEN SORTE SKOLE listening experience sounds like. There’s only one thing you can’t be sure about: you can’t be sure about anything.

Fans of the duo will recognize a few samples from the previous Lektion-series making a return but in a totally different way. The rest remains of familiar quality. DEN SORTE SKOLE play with expectations and have their rich boundary-less musical knowledge as the biggest plus on their side. From middle-eastern dancehall madness to freaky jazz experiments, from intense noise to beautiful piano trips – everything is on Indians & Cowboys. And the guys are also showing the right attitude. Not only is the record available as free download or a price of your choice (we recommend that option) right here but they are also sending the right message. The two Danes have compiled a 30-page strong booklet that informs the listener of the origin of each sample and where to find it. DEN SORTE SKOLE go even further – they scout out each sample to download as mp3’s, they purchase those albums as a way to pay respect to the artist for using their sounds. That itself deserves a medal. In the heated discussion about copyright, legal rights and our understanding of art, the Danes send an important signal. They acknowledge the origins but allow art its place to grow in different directions. Music is not for free – we can all agree on this. But shouldn’t it be allowed to transform itself into all different kinds of directions? DEN SORTE SKOLE are not asking these questions, they just deliver the powerful answer. And that itself should silent any discussion.

DEN SORTE SKOLE open the world’s rich musical heritage of the last century and rearrange its sounds to a unique and haunting listening experience that frees itself from any definitions and limitations – Indians & Cowboys is a truly unique experience.