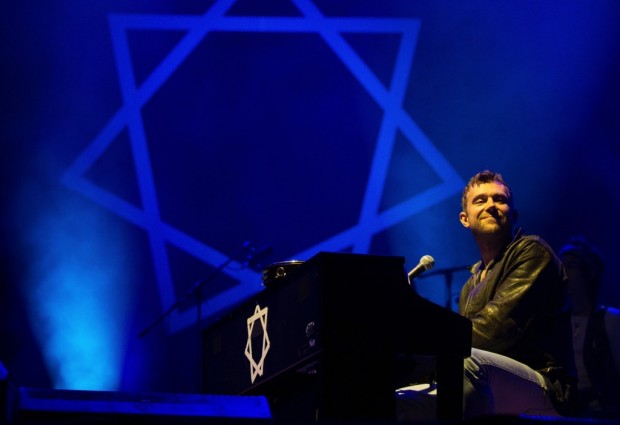 Flash storms, a full day of rain followed by days of extreme humidity – conditions which had not plagued the festival for seven years – did little to dampen the spirits of the adrenaline-fueled masses making the pilgrimage to Novi Sad, Serbia for EXIT FESTIVAL 2014. In fact, one might say that the challenges added by the elements solidified camaraderie throughout the extremely muddy fortress and campgrounds – conditions which were unavoidable in the first 24 hours.

EXIT FESTIVAL 2014‘s ubiquitous designation as ‘Best Major European Festival’ aside, the event is without a doubt a unique and amazing human gathering which puts reality on hold for all involved as it consumes the otherwise quiet city. As one local put it: ‘We don’t have much going on here but we DO have EXIT, and it is a very big deal.’

Amongst the myriad moments enjoyed by EXIT FESTIVAL 2014-goers this year, here are a few of note:

DAMON ALBARN openly admitting that this was his first visit to Serbia, ALBARN‘s show was overwhelmingly received by an ecstatic audience. Fans sang along to a set spanning practically his whole musical career. Getting off to a somewhat slow start with new solo songs unfamiliar to the audience but the entire band lined up for a bow to a roaring crowd by the end, great to see this guy on stage at any age really.

RUDIMENTAL live stole the show – they are joyous to behold and there was hardly anyone in the crowd of tens of thousands who wasn’t dancing to their killer Main Stage set Friday night. The UK has a long, great history of producing high-quality pop acts to which we can now add this talented young group who recently came barreling out of the London scene with a hybrid-throwback sound that is altogether familiar yet vibrantly fresh at the same time. Elements of R&B meet GOLDIE-esque D&B with a stage presence almost reminiscent of SLY AND THE FAMILY STONE. The group utilizes overtones of big-band/hip-hop/soul-funk disco (and even a few coordinated dance moves thrown in for good measure) and the result is simply fantastic. These guys are going nowhere but upwards – and more power to them. 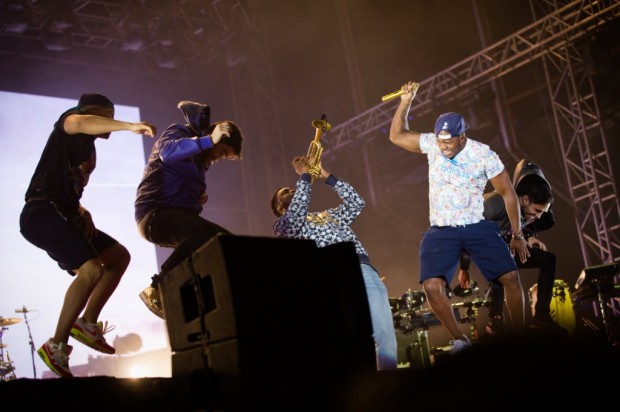 SKRILLEX. Whoa. His live performances are essentially a massive release – a full on good vibes assault – and it is no wonder he has gained legions of the 21st century’s ‘lost boys’ who come to rock out to music they have most likely only ever heard through tiny, noise-canceling earbuds or computer speakers. The result is beautiful, blissed-out chaos orchestrated by the voice and silhouette of this energetic imp from Los Angeles who constantly works the crowd, jumping up on and leaping off the LED DJ table as he urges on his audience.

In the 30 minutes preceding SKRILLEX‘s set as the crowd closed in on prime spots front and center I found myself standing next to a group of three middle-aged Croatians and their teenage friend. With some time to kill, we chit-chatted
‘Have you seen him before?’ I asked.
‘Oh, no, we aren’t really sure what this is – we heard he is a good DJ?’
‘Oh boy… so you have no idea what is about to happen?’
‘No.’
‘Ok, so you know the internet?’
‘Yea.’
‘Well if the internet had a baby it would be SKRILLEX and his shows… are kind of like transformers fighting in a thermonuclear explosion accented by random pop intervals.’
‘Really.’
‘Yes.’
‘Oh dear. I am not sure if I am going to like that.’
‘I’m not sure if ‘like’ is the right word – it is something to be experienced, and if you bring the party then it will be really, really, fun. It is so rock and roll, actually.’
After that the show, which started 15 minutes late, exploded and we lost each other forever in the crowd. Being three meters from the stage at a SKRILLEX show is a shocking experience, no doubt. The trio left their teenage cousin to fend for herself after a song or two and the show raged on for nearly another 2 hours.

DISCLOSURE. I heard numerous times from people at the festival that Disclosure was the main act they were there for – but then again all of these comments came before DAMON ALBARN, RUDIMENTAL or SKRILLEX, all of whom were contenders for the best moment. Apparently DISCLOSURE opted out of doing a live performance for fear the Dance Arena stage was too small, but regardless of what they ended up doing crowds were pleased. After playing dozens off their own songs, tboys ended with ‘one more song’ which turned out to be CHIC’s Le Freak followed by OUTKAST‘s Ms Jackson – which had everyone and their mommas and momma’s mommas singing along in unison.

PARTY TO HOUSE and DnB LIKE IT IS 1999. CARL COX vs. DANNY TENAGLIA, CARL CRAIG vs. GREEN VELVET, TIGA vs. DJ HELL, and EATS EVERYTHING – amongst many others – all enjoyed wildly popular sets keeping the dance area packed from late evening through until long past daylight every night of the festival. One bizarre and pretty awesome phenomenon of note however is that both within the EXIT universe and beyond we are apparently at a point now with the (who-the-hell-would’ve-predicted) resurgence of drum-and-bass – so much so that DAVID BOWIE could basically release Earthling allover again and no one would even bat an eye. Thanks to integration and adoption of the outdated, virtually washed-up sound by dubstep and trap artists (or shall we say EDM artists as a whole?) drum-and-bass has once again found itself prominently placed on the millennial’s musical palette making it somehow simultaneously nostalgic and new in its appropriation into fresh acts – altogether a strange and surprising thing to wrap your mind around if you were there for round one in the mid-to-late 90s. 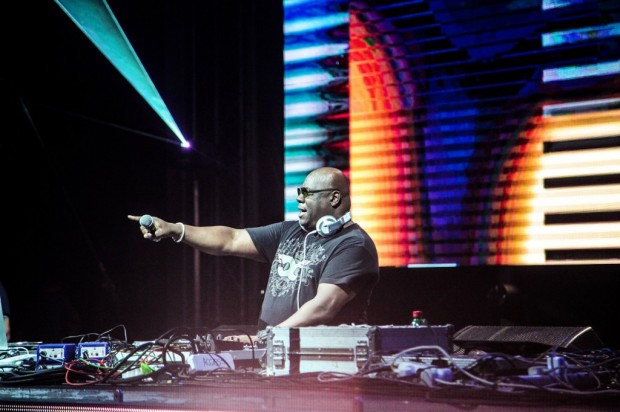 The festival’s first night came to a close in the wee hours of the morning after DUB FX and the UKF X-Bass Main Stage Takover acts – JAGUAR SKILLS, and newbie DIMENSION – all essentially drum-and-bass outfits – had blasted audiences with hours of synapse-singeing sound and light. One might think that three dnb acts in a row would be sort of predicable if not completely redundant, but their live performances prove just the opposite. Aussie act DUB FX really does an impressive live thing going for him – with a live band and a vast array of vocal distortion tools and beats at his fingertips he is endlessly bouncing, singing and screaming to produce is highly engaging and entertaining – and impressive enough to perhaps forgive a lot of the simple-sounding lyrics. The guy is just a ball of good energy. As the crowd turned to head home, a lot of them were drawn back into the fray as soon as  ANDY C and his MC charmed everyone into dancing like spastic infants for another few hours – a job which JAGUAR SKILLS picked up at the sun rose and everyone just kept going. Having mastered the art of teleporting through genres, JAGUAR has this way of joyfully blowing everyone’s minds with his snarky, rapid-fire slash-and-burn middle-finger musical randomness. Verdict: easily the best ninja-DJ ever.

One of the perks of the sort of conscious barrage of cross-pollenated nods and subtle shout outs which play out like inside jokes between the artists themselves – its is an added plus, almost something to decode and try to make note of – sort of, a wild-card element slipped in there with all the other details. For example, SKRILLEX drops in a DISCLOSURE hook or that CARL COX will drop in a random DEPECHE MODE line or two knowing full well that the band is huge in Eastern Europe. Likewise, newbie organic bass act KOVEN pulled off a flawless cover of MASSIVE ATTACK‘s Teardrop which surely raised the shekels all those 90s people out there in the audience. There are thousands of these to note, some nods spanning previous festival acts and side projects, but these are just a few.

In conclusion, EXIT FESTIVAL is an amazing experience unlike any other. After six days in Novi Sad and Belgrade this writer was very sad to leave – the locals as well as everyone met along the way were great. If you are looking for the best possible musical festival experience, one that combines music, location, and atmosphere in a beautiful mix, then EXIT is definitely the place to go. 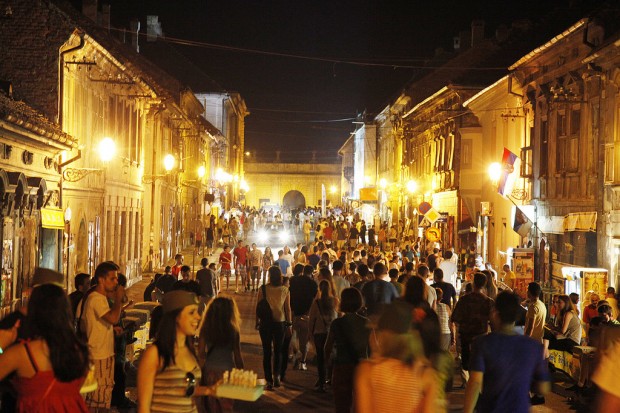 Always worth a trip – the beautiful Novi Sad by night. 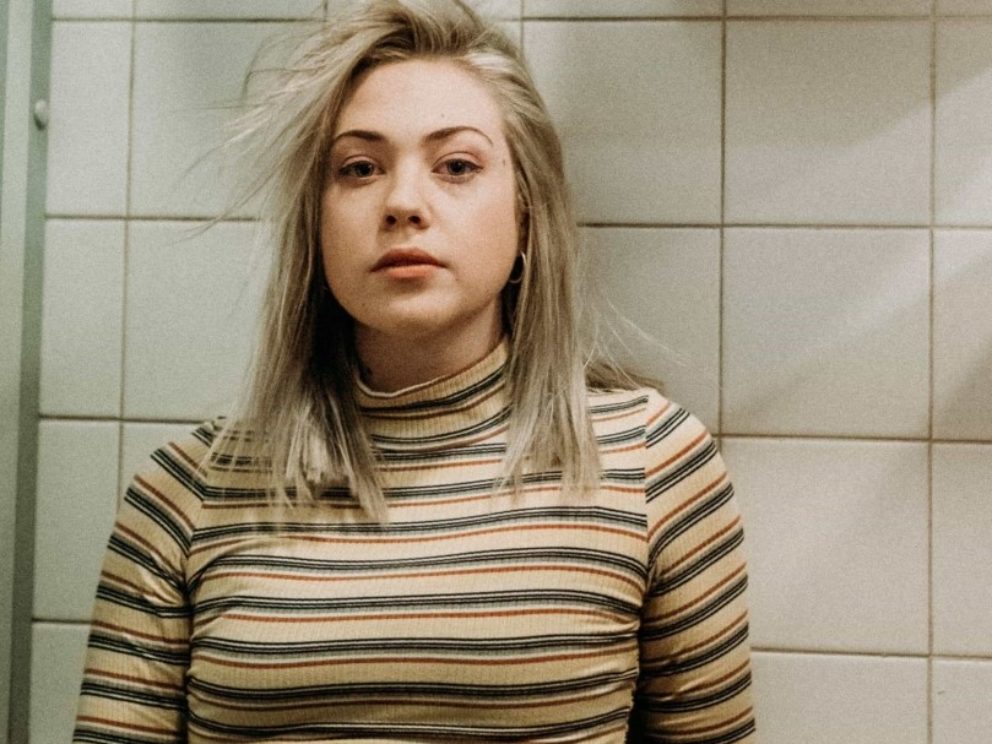 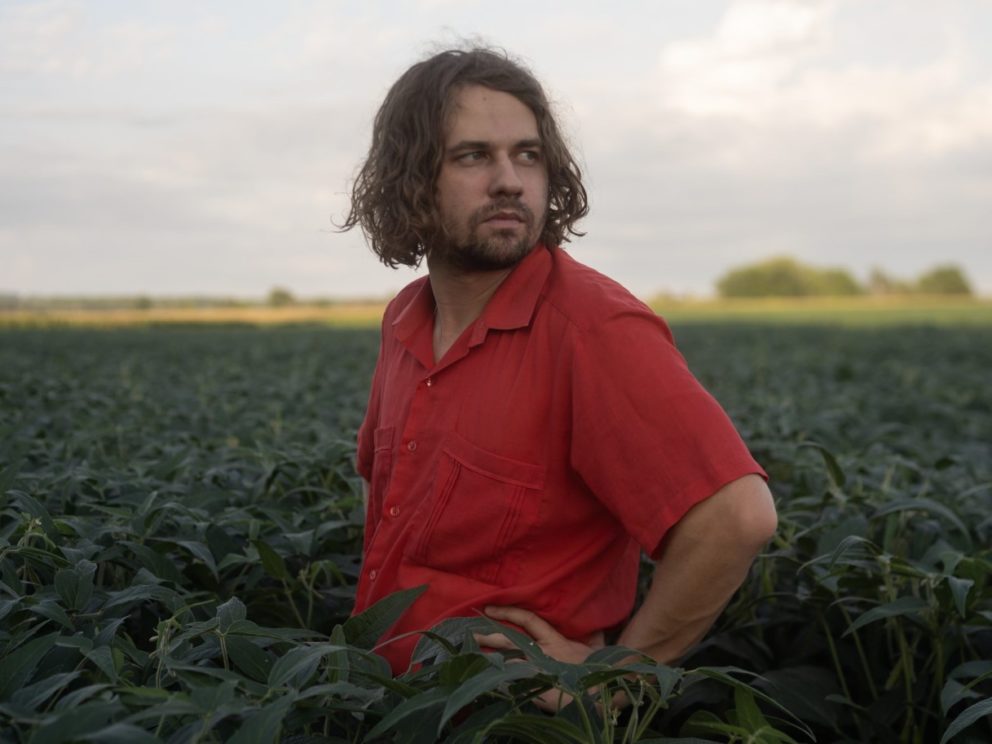 The Soft Twilight Glow: Kevin Morby And The Warm Colours Of Melancholy

The day is coming to a close. The remaining daylight will swallow whatever is in front of us, little by little dragging this valuable present moment into the past. No matter how much we are trying to hold on to it. And with it, some thoughts and hopes will eventually fade away, too. Laying bare, an increased feeling of melancholy. A sensation so profound, Kevin Morby's new album 'Sundowner' takes us on a journey through those fleeting twilight hours full of magic and tristesse. A spirit of the times hovering above it all.