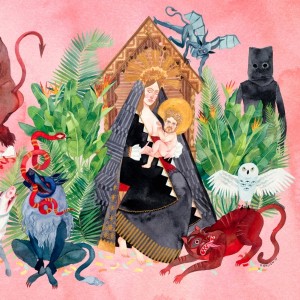 I Love You, Honeybear

01. I Love You, Honeybear
02. Chateau Lobby 4 (In C For Two Virgins)
03. True Affection
04. The Night Josh Tillman Came To Our Apartment
05. When You’re Smiling And Astride Me
06. Nothing Good Ever Happens At The Goddamn Thirsty Crow
07. Strange Encounter
08. The Ideal Husband
09. Bored In The USA
10. Holy Shit
11. I Went To The Store One Day

Lo and behold! Beloved alt-folk extraordinaire FATHER JOHN MISTY has birthed yet another musical prodigy with the release of I Love You, Honeybear. Previously known for his work with the illustrious FLEET FOXES, the man – otherwise known as Joshua Tillman – has in actuality been recording and releasing music for over a decade now. This record marks his second creation beneath the Father moniker after 2012’s Fear Fun.

Opening and title track I Love You, Honeybear bursts in with grandiose airs, a wooden cane twirling and a top hat backed by orchestral lifts. Everything drips in golden hues from the beginning, fireworks of sunshine exploding across sprawling landscapes. There’s a wonderful feeling of space and motion, a hearty swinging that falls back into a smooth sway. As is often the case with Misty, the lyrics drive in a different grain; a power ballad dedicated to love is embellished with a delightfully cynical ‘Fuck the world… May it be only us who feel this way.’ This playfulness continues with tracks such as the cheekily titled When You’re Smiling And Astride Me, a string-drenched number that perpetually unfurls – not to mention the Spotify-swipe release of the entire album as an innocuous SAP file, the quality equivalent of a cellphone ringtone. 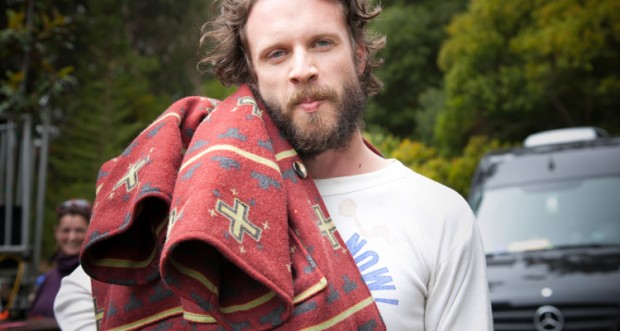 When True Affection kicks in, we’re thrown just a little off-balance. The electronic beat behind it is like throwing open curtains to a new room, ANIMAL COLLECTIVE-esque harmonies soaring over its  steady click, choirs of synthesiser chiming in to fill the gaps with surreal lilts and warbles. Strange Encounter is a highlight of the record’s latter half, sliding in with a just-jilted rhythm and melting into buttery vocal by FATHER JOHN MISTY. It’s the kind of music to slide across wooden floors to in your socks while dusting the banisters; it’s elegant, it’s huge, it makes you feel a bit like a hero. The Ideal Husband adds the noise, an undercurrent of wrong-pitch fuzz giving off a vague aggression as high-pitched piano repetition hammers in the nail.

From there we hit the quiet, smooth plateau as the record rides out to its end; Bored In The USA and Holy Shit gently move and breathe, working up to their heady climaxes. I Went To The Store One Day is the tip-toe wrap-up that leaves the breath held, the playing-off of violins emanating the ending of a fairytale film soundtrack.

‘I Love You, Honeybear’ is a wonderfully delicate creation; a sweet and syrupy record with a complex and intelligent kick. Another gem from our favourite sonic pastor.