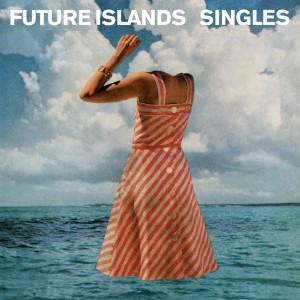 Let no-one say that a good TV-appearance is irrelevant in today’s pop-business. At least the one that the Baltimore threesome FUTURE ISLANDS recently delivered in Letterman’s Late Show is certainly one to remember. And one that could help them gaining the attention they actually deserved for a long time now already. Eight years after their debut, with two outstanding records for Thrill Jockey, FUTURE ISLANDS now present their 4AD-premiere with Singles – not a title of understatement in the narrow sense of the word. But a fitting one indeed, as this is not only by far their most focused record but also the one that could easily stand for their work in general.

For those who attended one of the various FUTURE ISLANDS shows in the last years, this record can seem like a release of pressure: finally they managed to transcend the magic immediacy of their live-quality onto a record. As good as In Evening Air and On The Water might have been but they somehow tended to drench the quality of their songs with soaking heavy vibes near to total despair. The stoic strength of Gerrit Welmers and William Cashion now sees a much more open spaced arrangement. With the naturalistic drumming approach of their newest member Denny Bowen there is now a certain tension between the clean, warm beats on the one hand and the galloping bass-lines along to heavenly 80s wave-synths on the other. Some neat ideas like the horn-section in Sun In The Morning or the acoustic guitar strumming in Lighthouse add to the richer sound of Singles.

But still, there is an undeniable center in this music named Samuel T. Herring: Watching him acting out his vocals is an unforgettable experience. People tend to understand that now after the aforementioned performance on Letterman. You can tell from these few minutes that these guys love what they’re doing and they’re not afraid of drowning in the biggest gestures. They are embracing grand imagery, walking the thin rift between the absurd serious dark wave-attitudes and stadium-sized pop-sounds. Nonetheless, there’s always been a hint of darkness in FUTURE ISLANDS‘ lyrics and to be honest: the way Sam Herring leads this fantastic band makes the lyrics a very important factor. Obscurity, heartfelt passion, fear and pain – feelings that are likely to be misinterpreted by a bad singer. Yet Herring might be one of the most distinct around nowadays. From warm beauty to barking, growling dread in a minute? No problem, just take Singles‘ last two tracks Fall From Grace and A Dream Of You And Me.

It is a dangerous and brave way that FUTURE ISLANDS decided to take – and for now, it was the best possible decision. Question is, what they encounter if they go on down that road. As Seasons itself says: “People change, yeah and some people never do. You know when people change, they gain a piece but they loose one too.” – FUTURE ISLANDS decided to stress what was inherent to their music before. And they’re good enough to have any right to do that. Therefore, Singles is nothing but the one album that could make them big and, at the same time, the one that sets standards within their own work.

With their fourth record FUTURE ISLANDS proove the courage to stress the pop-elements in their music – Singles is a great, deep but also more lighter breakthrough-attempt.