All The Small Things: A Look Back on Highfield 2014 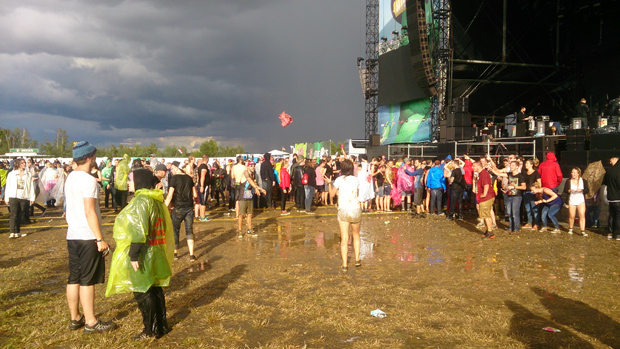 On this last weekend the HIGHFIELD FESTIVAL celebrated the first “sold out” in its current location near Leipzig with 25.000 visitors attending. So first things first: Congratulations for that. People are obviously enjoying the HIGHFIELD as one of the last big festivals for alternative and punk music. If we start complaining here then it’s not because we want to degrade that enjoyment. But still we must admit that there’s little that’s special about these festival experiences – instead, festivals of this size just feel totally arbitrary these days. Let’s take a closer look at why that is.

Let’s concentrate on the last band of every day here. QUEENS OF THE STONE AGE: nailed it. This is a band with substance and the ability to make complex rock music seem effortless and compelling. Great performance! And there’s nothing better than dancing off into the night all the way through I Wanna Make It Wit Chu. BLINK 182: the pop punk-heros with one of their rare live-appearances. And you could tell why that is. There was nothing sincere about it. Not even the slightest impression that the band itself is convinced of what they’re doing up there (except for drummer Travis Barker maybe). Last but not least: MACKLEMORE & RYAN LEWIS. Confetti-canon? Check. Endless monologues of questionable relevance? Check. Playing Can’t Hold Us two times? Check. Sorry but this is serving people’s needs. People, who got used to the colourful circus, the higher & louder of today’s festival-“culture”. But apart from the headlining acts, what did HIGHFIELD try to be musically? 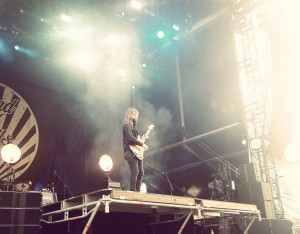 Well, it’s gotta fit the party. And that’s why oldschool punk (LAGWAGON) got mixed with a decent emo-revival (JIMMY EAT WORLD, TAKING BACK SUNDAY), some comfortable German rock (JUPITER JONES) and Hip Hop (FETTES BROT, FÜNF STERNE DELUXE). And yes, some treasures could be heard and seen as well: mathcore-legends CONVERGE, the explosive two-piece ROYAL BLOOD or grooving Blues’n’Roll from BAND OF SKULLS – all highly enjoyable performances. Another special moment: ARKELLS fighting the rain and loosing the fight with dignity in the end. Those guys knew how to play the moment.

Music festivals that are as big (and as professionalized) as HIGHFIELD somehow have the tendency to become more like a theme-park with music. Including a Ferris wheel, countless ways to spend your money on mediocre food, even a mascot (the so called “Highviech”) is part of the experience now. An experience that people pay for and from which they expect nothing but a good time. Including getting drunk, acting stupid and celebrating their escapism in a controlled environment. Thus, festivals like this are an institutionalized space for people to freak out. Which is okay but also: highly conservative and quite boring in the end.

The point of it all is not that it’s wrong having people partying hard for a weekend, celebrating bands of their youth, getting entertained in exchange for money. The point is that this certain festival culture pretends to be one that’s fueled by creativity although it’s basically just about fulfilling needs. If size is what matters, even the littlest chance of discovering new and exciting (and for most parts: better) bands becomes vaporized by giant stages and huge screens. Sadly that’s why festivals of this size for most parts ain’t really the place to be for music-lovers anymore, at least in some way. The recent FLOW Festival in Helsinki or the Polish OFF Festvial proved to live by a different vibe. So, there you have it: It’s not just about growing old and getting alienated from the festival-vibe – it’s about a shifting focus that’s a pity: away from the music towards a whole world of fun and distraction.