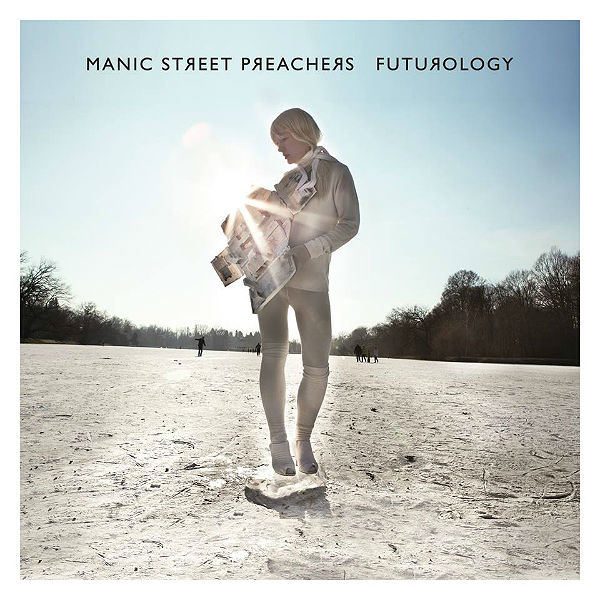 In the forerun of Futurology‘s release, Britain’s happy Marxists, the MANIC STREET PREACHERS, spoke of it as their ‘German’ record. The follow-up to last year’s rather quiet and melancholic Rewind The Film ought to sound completely different – no more introspection! And indeed, Futurology seems to be highly influenced by bands like POPOL VUH, KRAFTWERK and others; yet this is as still a MANICS-record, right? There would be no point for them in failing to copy Krautrock’s spirit; instead, Futurology tends to celebrate a more paneuropean vibe. With references to Eastern Europe (f.e. Hugheskova, which originally should have been the name for today’s Donetsk) and actual German lyrics from actress Nina Hoss who lends the stoic Europa Geht Durch Mich her voice. Nonetheless, the MANIC STREET PREACHERS are foremost one of the last decent survivors of a little thing called Britpop. And in that sense, Futurology became something like a very fashionable manifesto. Easy to listen to but with a deeper meaning hidden under its surface.

To be honest: We know what to expect from James Dean Bradfield and his pals, don’t we? Great hymns, great slogans, even greater guitars and melodies. Ever since the darker past of this band (circa The Holy Bible) the MANICS evolved away from any understatement. They embody what German pop-music often lacks: the self-esteem for keen, straightforward epicness. Futurology now serves as the really entertaining attempt of marrying that very British epicness with a certain amount of experimental bravery. Instrumentals like Dreaming A City or Mayakovsky seem to be the concrete outflow of that spirit. Of course there are still moments in which the Welsh can’t really conceal their glamrock-roots (f.e. in the chorus of Walk Me To The Bridge) and they stick to their left-wing topics as well, spelling out titles like Let’s go to war, Sex, Power, Love and Money or Misguided Missiles. After stressing the more personal approach with Rewind The Film, Futurology clearly underlines their political aspirations again. Still, after all those years, the typical MANIC STREET PREACHERS cynism is nothing but a blank expression for their utopian desires. Although they are not unaware of self-irony these days: ‘So you played in Cuba, did you like it brother? / I bet you felt proud you silly little fucker’ (The Next Jet To Leave Moscow).

Afterall, Futurology is an impressive statement of the MANICS‘ creativity. As always, you might struggle with their tendency for delusion of grandeur. But one can’t help to admit that there’s no other band out there who could have written such a serious yet entertaining European manifesto. Marrying Britpop and Krautrock, the MANIC STREET PREACHERS once again proved themselves as being the band that builds bridges – ideologically and musically.

The Manic Street Preachers’ ‘Futurology’ is an entertaining European manifesto combining elements of Krautrock and Britpop without being really outstanding at any of it.