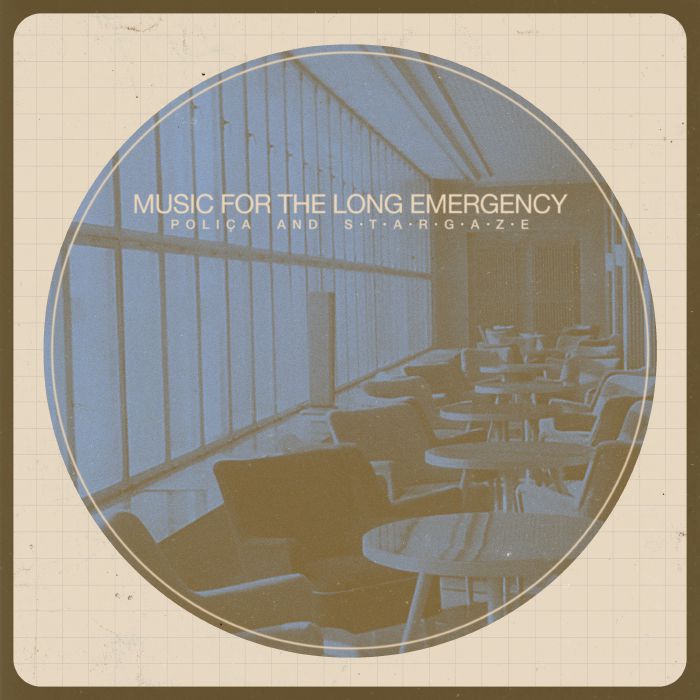 What happens when an electronic pop band meets a chamber orchestra? Right, something pretty special emerges.

Like many other people I got introduced to Poliça by that infamous Bon Iver statement that they’re the best band Justin Vernon ever heard and most people connect their name with the use of autotune (okay, at least I do …). Although Vernon speaks highly of the band, I never really got into their music due to this intense use of autotune, probably But when I heard that Poliça tried out something new – the connection of their music with a chamber orchestra – I got curious. So, I decided to give the band another shot and started listening to Music For The Long Emergency, a collaborative record with s t a r g a z e, a Berlin based chamber orchestra.

Poliça and s t a r g a z e met for the first time in 2016, improvised one time together and Ryan Olson from the band rrecorded these improvisations to put them into proper songs which he sent to the orchestra afterwards. They worked together over 18 months with only a few real-life-meetings. One time they had a little residency at the Funkhaus Berlin for a week. After this long time an intense and very diversified record emerged. Music For The Long Emergency is a genre-crossing work that connects electro, pop and orchestral elements in all kind of ways. For example, the opener Fake Like focusses on Channy Leaneagh’s clear vocals with only some restrained strings and wind players. Marrow, the piece that follows directly afterwards, is much more experimental, featuring claustrophobic electronic elements, Leaneaghs distorted vocals and darker strings. Cursed is the most aggressive track on the album, a song that I would never have expected from this project. Dissonant strings meet a fast drum beat, accented electronic elements and an aggressive men’s voice. But it’s another track that clearly stands out of the others: How This Is Happening, a song that sounds pretty much like Björk. The piece was made one day after the election of the US president Donald Trump and transforms concerns and unbelief in atmospheric music. Music For The Long Emergency is an outstanding piece of work that finds new ways to connect pop with orchestral music. Every song is completely different than the one before and that makes this unique collaboration so fascinating. (Miriam Wallbaum)

Song to get you started: How Is This Happening
Stream it now: ► Spotify / ► Apple Music / ► TIDAL

Ought – ‘Room Inside The World’ 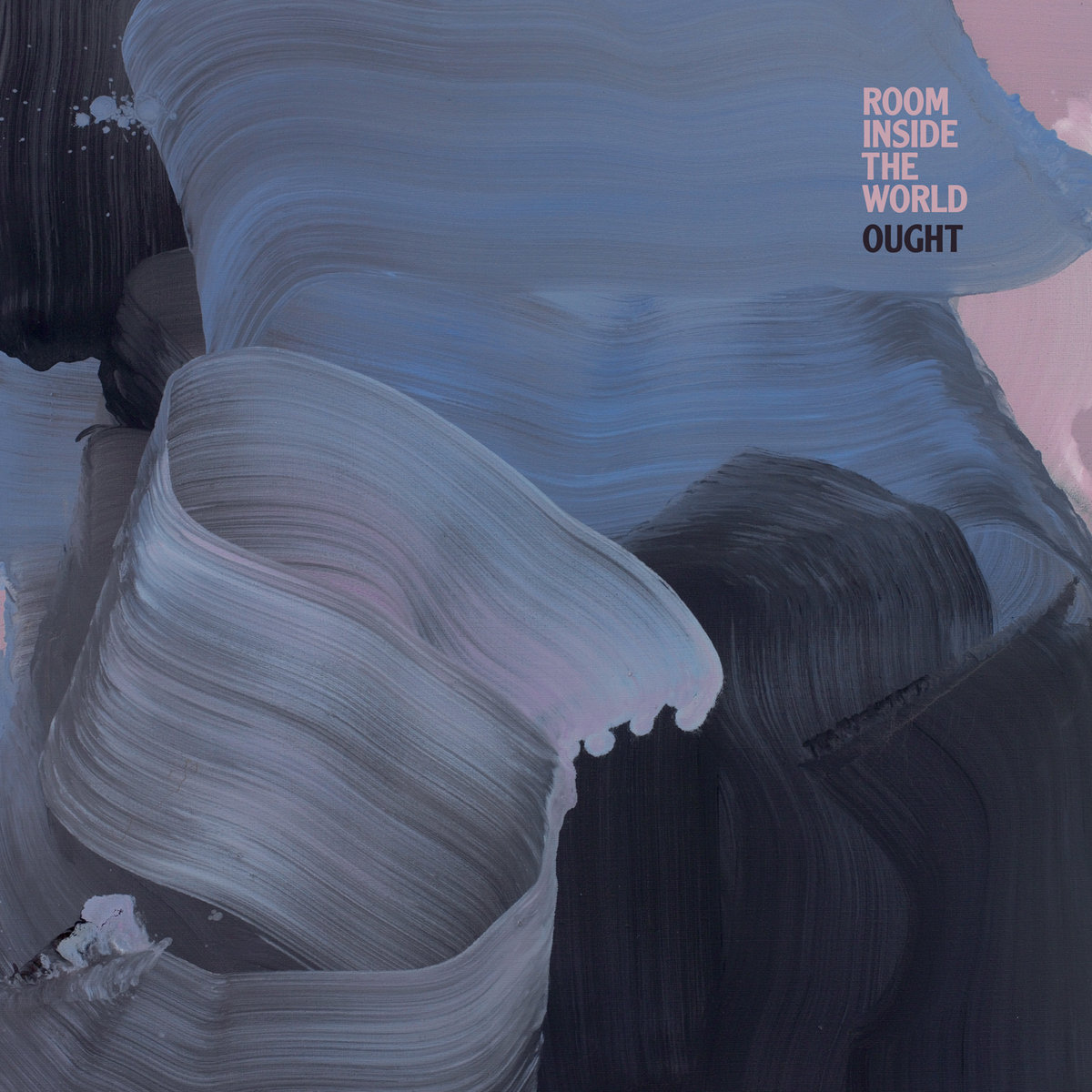 One probably did Ought injustice by calling them a post-punk band all along. Room Inside The World, the Montreal foursome’s third record and their first one for Merge Records, should settle the discussion about their stylistic range once and for all. It’s a record fueled by punk’s energy and nonconformistic cool, with songs that are anxious to connect with indie rock’s likeable appeal and softness and it is all driven by an art pop mindset. We get choirs, more prominent synths, drum machines – and a Tim Darcy whose recent solo recordings seemingly boosted his self-esteem as an artist even further. But it wouldn’t be him if that led to an Ought record that’s full of itself.

Instead, it defines a band content with its constant struggle. Outstanding track Disgraced in America probably exemplifies it best: It’s an airy, pretty fly, almost Walkmen-like indie rock tune with Tim Darcy’s effortless seeming voice crooning about how he’s ‘floating ‘round downtown, floating ‘round Spain’, just ‘like a dentist, rooting for pain’; but all of the highly addictive indulgence is bound to crumble and disintegrate halfway through the song, ending in a messy and pretty stark place with Darcy proclaiming: ‘Demarcation wears me thin/ Demarcation does me in’. Songs bend from beauty to trenchant within seconds on this record without ever loosing it completely. Room inside the World truly is an accomplishment and adds exciting new layers to this band’s already profound class. (Henning Grabow)

Song to get you started: Disgraced in America
Stream it now: ► Spotify / ► Apple Music  / ► TIDAL 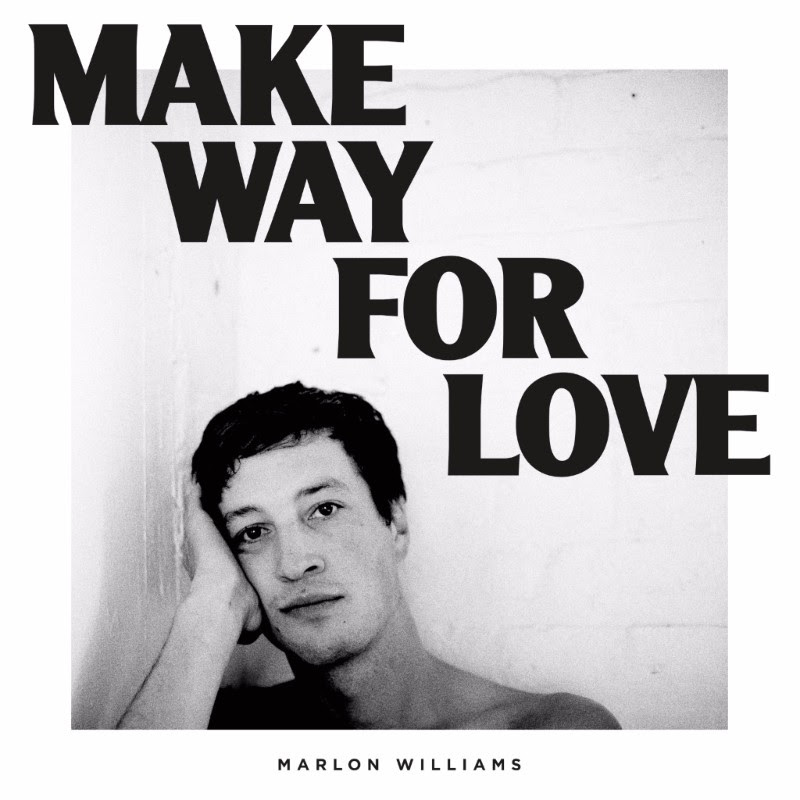 The second album by the talented songwriter feels like it is fallen out of time, resulting in a really breathtaking listening experience.

There are many aspects in the music of New Zealand’s Marlon Williams that can cause excitement. Of course, his remarkable voice with all of its facets and emotional abysses is the most obvious one. But there’s something beyond that which makes his second full-length so fascinating: it’s the old-fashioned and heavily nostalgic way in which these songs unfold themselves. Williams channels the classical style of the 1950s and 60s in such an authentic and honest way that it immediately connects with you. His voice clearly resembles iconic heroes like Elvis but also people like Tony Williams (of The Platters) and if you listen a bit closer you might even spot a young Morrissey in here. His hopelessly romantic timbre is also supported by the delicate sound of Make Way For Love which feels like a much needed nostalgic daydream in these accelerated times.

Marlon Williams‘ new album reflects on the various states of love, from the more hopeful moments (Come To Me) to the really desperate ones (Can I Call You). Williams easily balances between various emotions which allows him to place a gloomy rockabilly track like Party Boy right next to a really sad piano ballad called Love Is A Terrible Thing in which he sings such tremendous lines like ‘I’m feeling as lucky as a snowman thing in spring’. It would be too easy to label Williams ‘just’country’, ‘just folk’ or play the ‘retro’ card right here. It’s not that easy. But it’s a bliss from start to finish, an album that only an artist with a great amount of musicality can craft. And that’s why it’s so good. Make Way For Love keeps the quality up to the end where the haunting duet with Aldous Harding (Nobody Gets What They Want Anymore) and the very hopeful title-track provide a great finale. All hopeless romantics – please jump on board for this one. (Norman Fleischer)

Song to get you started: Nobody Gets What They Want Anymore
Stream it now: ► Spotify / ► Apple Music / ► TIDAL 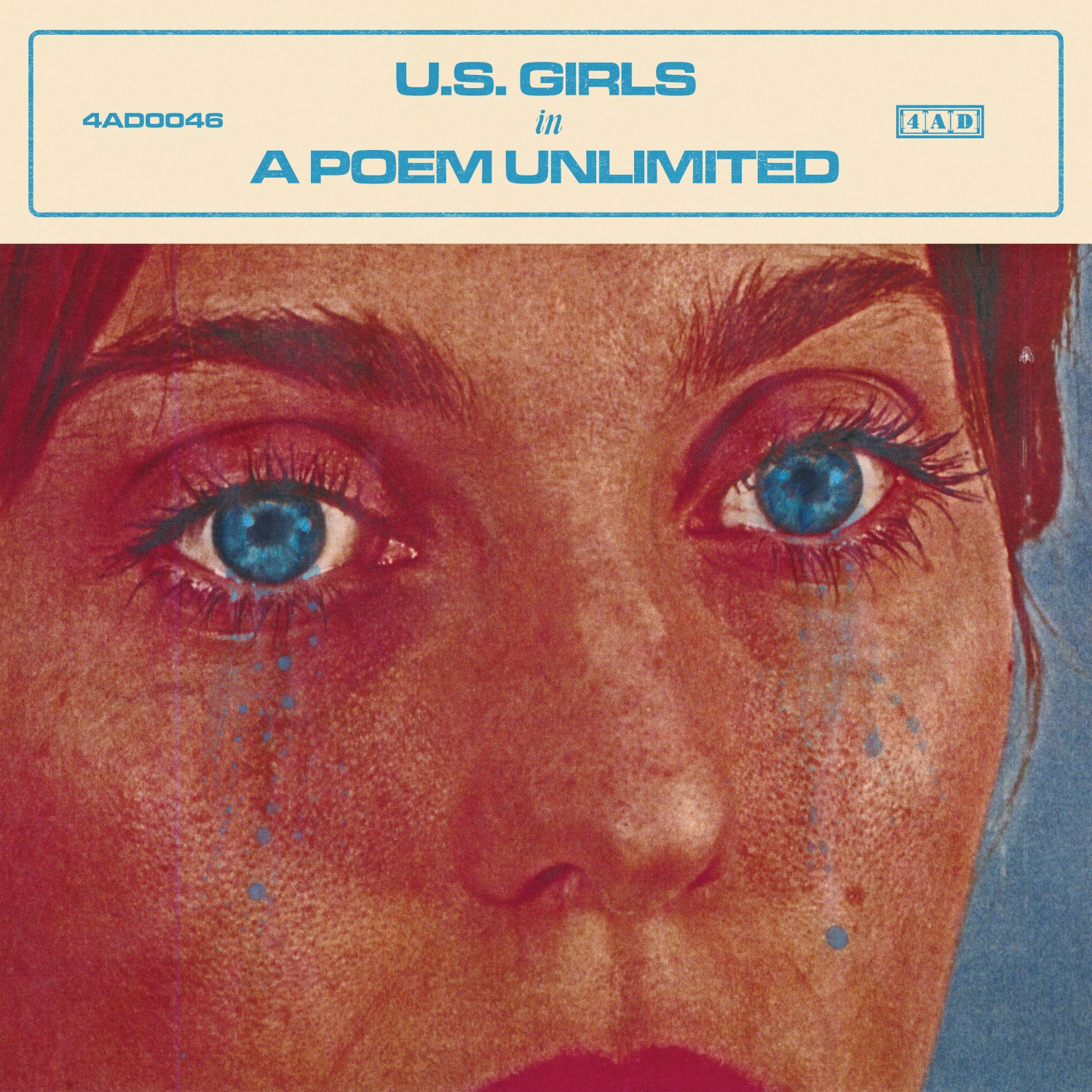 Ever since Meghan Remy released her first full-length under the U.S. Girls moniker around ten years ago she’s been pretty much constantly active and pretty restless when it comes to her creative progress. In A Poem Unlimited is already the sixth album by the charismatic Canadian songwriter and more than ever defined by her artistic and political determination. Remy manifests her vision in the form of a sound you can widely label as ‘indie-pop’ although that clearly limits the whole thing. The opener Velvet 4 Sale already shows a broader scale of sounds and delivers gentle R&B vibes right next to a dirty guitar solo that would even impress the late great Prince. Rage Of Plastics continues the adventurous path and even delivers an epic saxophone solo.

In A Poem Unlimited is an album that takes care of female empowerment and the struggle for many women to get to the top. Aside from that it also deals with dark reflections of charged atmospheres that directly precede and follow acts of violence, so that already sets a pretty intense premise for the latest U.S. Girls album. Still, Remy surprises with such incredibly catchy pop tracks like Mad As Hell and Poem which make the heavy content seem so easy. You are allowed to dance in the face of these desperate times and especially the driven closing track Time with its hypnotic and freaky free jazz finale is the best example for that. Meghan Remy is not heading for the simple solution right here. Instead she delivers a challenging record that puts soulful groove right next to impending doom and that’s a combination you don’t see too often. (Norman Fleischer) 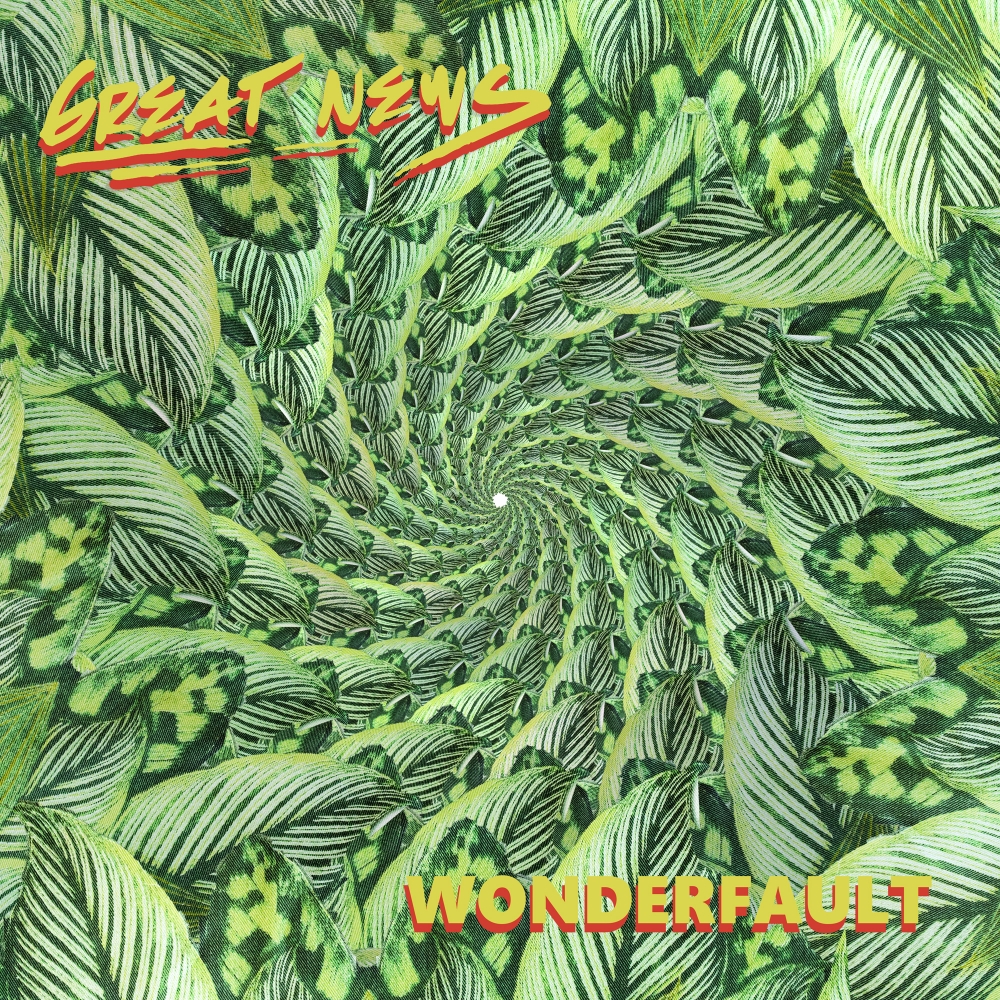 The Norwegian trio delivers a very well-crafted debut that might reignite your passion for good ol’ indie pop-rock.

‘Daze-Pop’ is what Great News are calling their style and it’s a quite fitting phrase for what the band puts forward on their debut LP: A stunning mix of 80th synthie-pop, old-fashioned 00s indie and psychedelic rock. Danceable feel-good jangling guitars and a groovy rhythm section make Wonderfault an uplifting summer record. One to dance barefoot in the sun or to lay dazed in the grass. The entire record tkaes the best from Tame Impala, The War On Drugs, The Smiths and the latest Foals trapped in a cotton candy cloud with some extra 80th synthie-pop frosting on top (The title-track rips off Everybody Wants To Rule The World by Tears For Fears but in a very charming way). Every now and then a decent heaviness makes its way up to the surface, like the stoner riff in the opening track Sleep It Off, before those catchy pop melodies cover all tracks of the preceding outbreaks.

Leading through the eleven songs is the echoing voice of singer and guitarist Even Kjelby. Sometimes a bit softer, sometimes with an epic timbre, like in Make Me Feel, where he isn’t afraid to show big gestures. I literally picture him standing shirtless on an icy mountain peak, waving his long hair in the wind and screaming his heart out in this. It might be a bit overtop but it’s actually the perfect set-up for the song, before the offbeat groove takes you to the dancefloor. It’s an intense ride although Great News pretty often stick to the three-and-a-half-minute mark, making a few songs sound a bit unfinished due to an unexpected early ending. Sadly, towards the end Wonderfault loses a bit of its straightforwardness as its hooks start to feel slightly repetitive and exhausted. Luckily, the last song It’s Easy lifts the spirit again when the trio unleashes the beast inside with a smooth heaviness and howling guitars – at least for the last one and a half minutes. I mean, it’s still ‘only’ a debut album so there’s plenty of space to grow for the Norwegian band. But this first impact is quite a head start. (Abhilash Arackal)

Song to get you started: Told
Stream it now: ► Spotify / ► Apple Music / ► TIDAL