My fingertips ache as I bend the strings of my guitar, not calloused enough, the steel leaves marks on my skin. I sigh and put the guitar down. The first bars of Red House echo out of my speakers, played in such leisurely perfection it simply cannot be imitated. Last week was the fiftieth anniversary of Jimi Hendrix’ death.

Hailed as a guitar legend, the legacy of his music remains unparalleled. While the generation that lived to witness the artists live is growing older, I want to take a few moments to reflect on the life and work of the unique artist who left us too soon. If the only things coming to your mind when you hear the name Jimi Hendrix are electric guitars, Woodstock, and the stencil printed on the occasional collection of some clothing brand, bear with me for a few minutes!

Down the Rabbit Hole

The first Jimi Hendrix song I heard was his rendition of Bob Dylan’s All Along The Watchtower around the age of thirteen. I remember being overwhelmed by the musical style that, at that point in my life, I couldn’t really place or understand. But I kept coming back to it, at first reluctantly – the song in the playlist you usually skip but are forced to listen to sometimes because you cannot reach your device – then excessively and obsessively – the song you put on repeat because nothing else seems good enough. From there, I inevitably fell further down the rabbit hole. For a good year and a half of my life I didn’t listen to much else than the entire Jimi Hendrix discography. So how did music that was written and recorded decades ago excite a millennial and why should you give Jimi Hendrix another spin in 2020?

As the title to his (more or less) autobiographical collection of notebook entries and poems says so fittingly, Hendrix really started at zero. But I will not start recounting biographical data here, for whoever is interested there are ubiquitous documentary films and books about the life and legacy of the musician. Are You Experienced? is the first album that Hendrix released, back then based out of London. Amongst the crowd of rock musicians coming out of the UK, Jimi Hendrix stood out, not at last because he was one of the only Black bandleaders surrounded by bands like the Rolling Stones, Beatles, and Cream.

“I sacrifice a part of my soul every time I play.”

Inspired by the classic Blues legends like Robert Johnson, Muddy Waters, and B.B. King, Jimi Hendrix learned to play the style by ear playing along to records and learning the riffs, but it was the electric guitar that really took his heart. Exploiting the instrument to the fullest, he changed the way electric guitar was viewed back then. I think most of us are familiar with the sound of the wah-wah pedal and heavy reverb prominently featured on Jimi’s records.

His true genius lies in the way he spoke through the electric guitar using whatever tools around him to create the sound he wanted. The guitar in his hands can sounds warm and melodic, steely and cold, noisy and angry, restrained and shy, it echoes his rhythmic voice, it plays rhythm and melody at the same time, and it expresses more emotion than most can through words.

To say that Jimi Hendrix life revolved around music would not be an overstatement. Becoming an entirely different person on stage, the eccentrically dressed guitar wizard was shy and quiet as soon as the guitar was not dangling round his neck (or behind it) doing the talking for him, his words became scarce. But oh, could the guitar talk. I think the best example is the performance of The Star Spangled Banner opening his Woodstock performance.

Going on after heavy rains shook the epic music festival, Jimi did not need to set his guitar on fire to set it on fire. His rendition of the US national anthem is haunting to this day. Amidst the raging Vietnam war and the Civil Rights Movement, Hendrix spoke without words, his guitar taking on a life of its own bending and shredding the strings with such heavy reverb and electronic distortion that they sounded somewhat close to exploding bombs. Especially against the political and historical backdrop this really goes underneath the skin. Jimi Hendrix managed to express himself and the times he lived in, through his guitar. In the time of political and social upheaval, musicians like that are not just mind stirring but soul healing and his distorted and violent version of the national anthem seems to be as fitting for this moment in time as ever, looking at the current affairs shaking the United States.

“White-collared conservatives flashing down the street

Pointing their plastic finger at me

They’re hoping soon, my kind will drop and die

But I’m going to wave my freak flag high, high”

Jimi’s way of playing the electric guitar is unlike what any other musician has ever done with the instrument. Even fifty years after his death, his talent and skill and constant drive to experiment are unique. Fifty years after his death, Black people are still fighting for justice and equality. Fifty years after the down to earth musician overdosed in London where his musical career took off, Black artists and voices are still being marginalized and exploited. Especially in the genre of rock, which was built on the backs and pains of the Black blues musicians few of whom got the respect they deserved, Jimi Hendrix by his mere and unapologetic existence fought against the structures in place. The white washing of rock music is still a problem today. Most musicians breaking into the mainstream of the genre are white and draw from influences like the Rolling Stones and the Beatles, without looking at where the music they are inspired by really has its roots. It is worth taking a moment to honor the tradition behind the music. 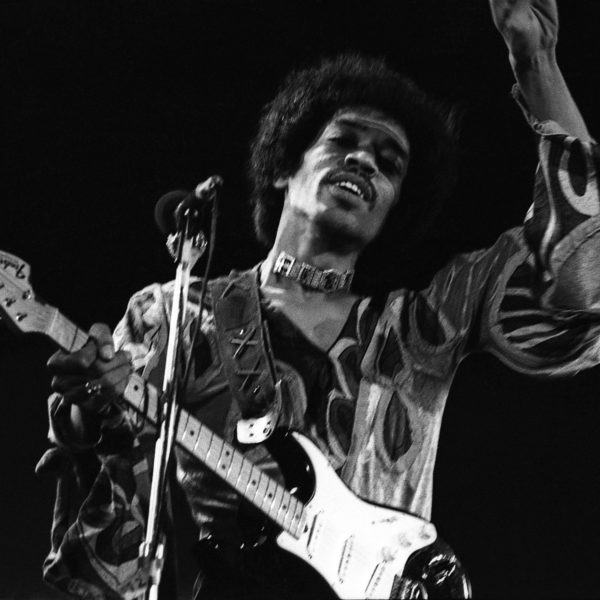 Music was Jimi Hendrix’ way of talking, of expressing himself, of looking at the moment in time and society. His lyrics tell personal stories of love and heartbreak, of his childhood and struggles, but they also tell the story of the times Hendrix lived in. Deeply rooted in the blues tradition, they express pain suffered by an entire people treated unjustly. Over the span of four years – his short recording career – Hendrix managed to shape and change the understanding of music and the role of the electric guitar in rock and pop music. Throughout his journey to the top, he remained his authentic self while the industry pushed and tugged to make him fit into their narrow-minded boxes. When I think about authenticity in music and artistic expression, I think Jimi Hendrix. He pioneered the use of electronic elements in music, of amps, distortion, and pedals in a way nobody dared to at that time and I am convinced that much of today’s musical versatility is owed to that unique and courageous exploration of creativity.

Wink Of An Eye

There is no use in crying over a musician and person who left this world fifty years ago, but it is important to keep the legacy alive. I am still to be shown an artist who compares to Jimi Hendrix and it is hard to put the emotions I feel listening to his work into words.

Listening to Jimi Hendrix makes me cry and laugh at the same time. It makes me shake my head in amazement at songs and riffs I have already listened to a thousand times. It makes me smile at the little melodic theme I just now discover amongst the big riffs. Fifty years after his death Jimi’s music is keeping him alive. He imprinted his soul and energy onto the songs he left behind, and they took on a life of their own. They are never the same and always sound different depending on the state I am in, just like Jimi Hendrix didn’t stick to one version of the song but played them slightly different each time. The artist achieved his goal like no other: he lives on in his music. And fifty years after his death, he can make a millennial laugh, cry, and feel.

May he rest in peace and who knows, he might be writing his book about the blues scene on Venus as we speak.

“The story of life is quicker than the wink of an eye.”