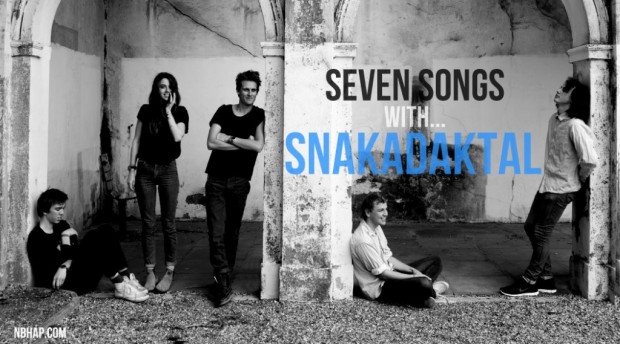 Last year’s debut album by Australian dream pop collective SNAKADAKTAL turned out to be one of NOTHING BUT HOPE AND PASSION‘s favourite debut albums of the past twelve months. The hypnotic character of Sleep In The Water got an irresistible force that soaked us deep inside its songs. Quite fitting as it is meant to be a concept album dedicated to the every floating uniqueness of the sea. And while it previously has been only the pleasure of a few parts of the globe to discover that beauty, Sleep In The Water is about to find its way to other territories now as well. Via lovely label Humming Records the album will be released in Germany on February the 21st. You can’t hide from it – and you definitely shouldn’t.

Just in time for this event we have SNAKADAKTAL guitarist Joey here for his very own selection of seven songs. The theme is clearly defined: ‘7 Classic Pop Songs for a Drive in The Top Down E-Type Jag.’ Experience some bouncing urban grooves on the next pages, including songs by KANYE WEST, DRAKE and others.