The Times Of The Stereotypical Man Are Over 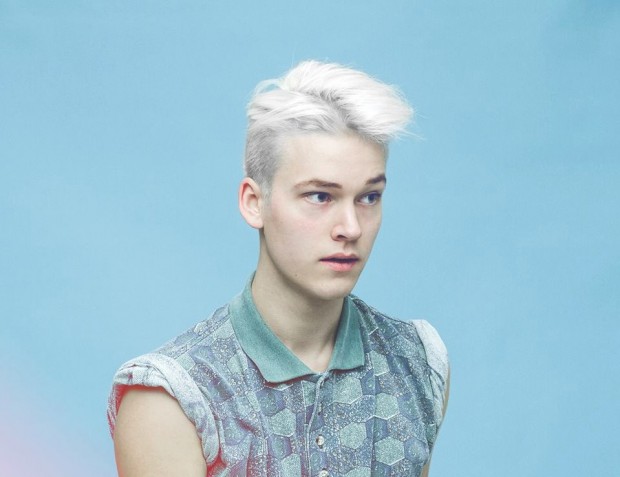 ASBJØRN, the Danish popkid with the relentless urge to dance, talks about gender stereotypes.
(Photo by Anna Jarmolowicz)

Without affectation, he created a presence that was wholly male without sacrificing feminine grace. He was not looking to make a political statement or an announcement of his evolving sexual persuasion. He was presenting something new, something not seen or explored as he saw and explored it. (…) As Cocteau said of a Genet poem, ‘His obscenity is never obscene.’
(Patti Smith about Robert Mapplethorpe, Just Kids, 2010)

I was raised to manhood by powerful women like Madonna and Beyoncé and later on I fell in love with Patti Smith’s life story and values. I couldn’t see myself in the masculine ideals of that time, you know, the self-conscious and muscled archetype, with a bunch of girls dancing around him. So I turned to the women who seemed to have it all figured out. Over the last four decades some of the women I am talking about have been provoking, pushing the limits of self-expression through music and sexuality shaping a female ideal, maybe even a human ideal, that is worth being very proud of today. But somehow it seems like the men have been sitting this one out. When you think about it; who honors the heritage of David Bowie now? Where is the visible diversity for young boys and men who don’t relate to the mainstream ideal?

From suppression comes the determination to fight for complete freedom and equality and I believe the women’s liberation has been a huge vehicle for female artists since the 1960’s and is still clearly echoing in today’s’ music industry. I know that there are still battles to be fought when it comes to gender equality. But I also know that when looking at pop music there is no doubt who has the upper hand. The women of pop create the trends and initiate the debates that get the whole world talking, and I think men in the music industry have come to fear women. I can’t blame them.

The female artists are turning the tables around these days, making the males look like rookies in the game. They are using sexuality as a power tool, and not necessarily to please men. On top of that they have developed a very strong sense of righteousness, like when Beyoncé states in her essay ‘Gender Equality Is A Myth’ in The Shriver Report: ‘We have to teach our boys the rules of equality and respect, so that as they grow up, gender equality becomes a natural way of life.’

I can’t help but feeling stung by that statement, partly because I think Mrs. Carter has a very narrow view on what a man is and how he sees a woman, partly because I suddenly feel the suppression on behalf of my own gender. No man has the balls to stand up to Beyoncé and tell her how wrong she is, because he will be labeled a male chauvinist. I see a pattern in the modern woman’s perception of her own gender.

She has become extremely sensitive to the smallest hint of stereotypical gender roles, like when the super model Emily Ratajkowski fools around in the music video for Blurred Lines, wearing pretty much nothing but her skin. There is a skepticism towards her judgment. Instead of assuming she chose it herself and trusting that she rather than feeling humiliated in fact feels empowered in and by the situation, many think she puts herself lower in the hierarchy by definition, because she is naked and dances around some (excuse me) stereotypical douche bags. The way I see it, her contribution to the music video actually just emphasizes how stuck-up men are in their own masculinity, and the joke ends up being on them – well, us.

When talking about women’s lib in pop culture I am afraid we’re in a draught. After having claimed the freedom to express themselves as they please women of pop have hit the classic point of every relationship: they need the men to show character. Until that happens, the ladies will make the drama themselves, but I believe the equality could benefit from a little ping-pong.

So what’s a guy gotta do? Look to the women. Look to Grace Jones whose sex appeal is not defined by gender but attitude. Look to my fellow-Dane Mø who is breaking into the mainstream with raw power and no mythologies to follow. Look to Madonna who made the Catholic Church get on their feet and the youth discuss morals of abortion, just from telling the simple love story of Papa Don’t Preach. ‘I didnʼt realize that being famous was going to be such a responsibility. And so you have to take that responsibility and use it in a positive way – or get out of the limelight’, Madonna once said in an interview (BBC documentary: ‘Madonna Louise Veronica Ciccone’, 1990).

And it is a responsibility to communicate what is true and honest and have the balls to expose yourself for exactly the man you are, and now is the time to do it. Today, boys and men are embracing their femininity on so many levels in youth culture. We’re probably in the most sexually liberated era ever, and no one is pointing fingers – you heard it here first: the time of the stereotypical man is over, now the pop industry just needs to catch up.