Once a centre of industrial revolution in Europe, then beset with economic problems, North Rhine-Westphalian city Wuppertal is looking back on a turbulent history. Having spent most of its time in the shade of more prosperous cities like Cologne and Düsseldorf, small initiatives have taken upon them the task to transform cultural and social life in the so-called ‘Manchester of Germany’. Wuppertal’s most exciting musical export, the psych-pop trio Darjeeling, took NOTHING BUT HOPE AND PASSION editor Igor and photographer Christian on a tour through their hometown, reflecting on both their origins and being part of a scene on the move.

It is a train ride that takes us to the designated meeting point of our tour. As we pass through the canyons along the river Wupper, rows of buildings rise above our heads and climb up the hills around the city. The band that are supposed to show us around could justifiably be described as local heroes. Jan Szalankiewicz, Till Reinkenhoff and Markus Kresin of Darjeeling have spent several years honing their craft as a psychedelic pop three-piece – the result, the self-produced Life Is An Intriguing Mosaïque Of Revealing Secrets ties together several decades of left-field rock music into an eclectic, yet impressively straightforward statement.

Tracks like the vivid It’s A Dream and summery I Won’t Be Waiting Till You’re Gone exude a spirit surprisingly alien from the surroundings we find ourselves in when we meet the band on Berliner Platz in Oberbarmen. The plain rows of buildings we pass on our way to our first stop are a result of the severe bombings during World War II that destroyed much of the historic structure along the river. It’s for this reason that the visual appearance of the Wuppertal has a markedly bad image, and the grey and cold weather that haunts us certainly doesn’t help.

The history of Darjeeling starts sometime in high school and under a different name. ‘We’ve all known each other by sight since it was not that big of a school’, recounts guitarist and lead singer Jan. ‘I eventually found out through a social network that Till had been collecting vinyl, which at that time wasn’t a wide-spread hobby. I had just started collecting myself at the age of 16 and struck up a conversation with him.’ A friendship based on music started to blossom which culminated in Jan inviting Till into his band after he heard him sing and play a song on the piano. The following years were spent on refining their live performance and songwriting, and the line-up of the band was completed by Markus, a then-acquaintance of Jan who was drafted in from another band. 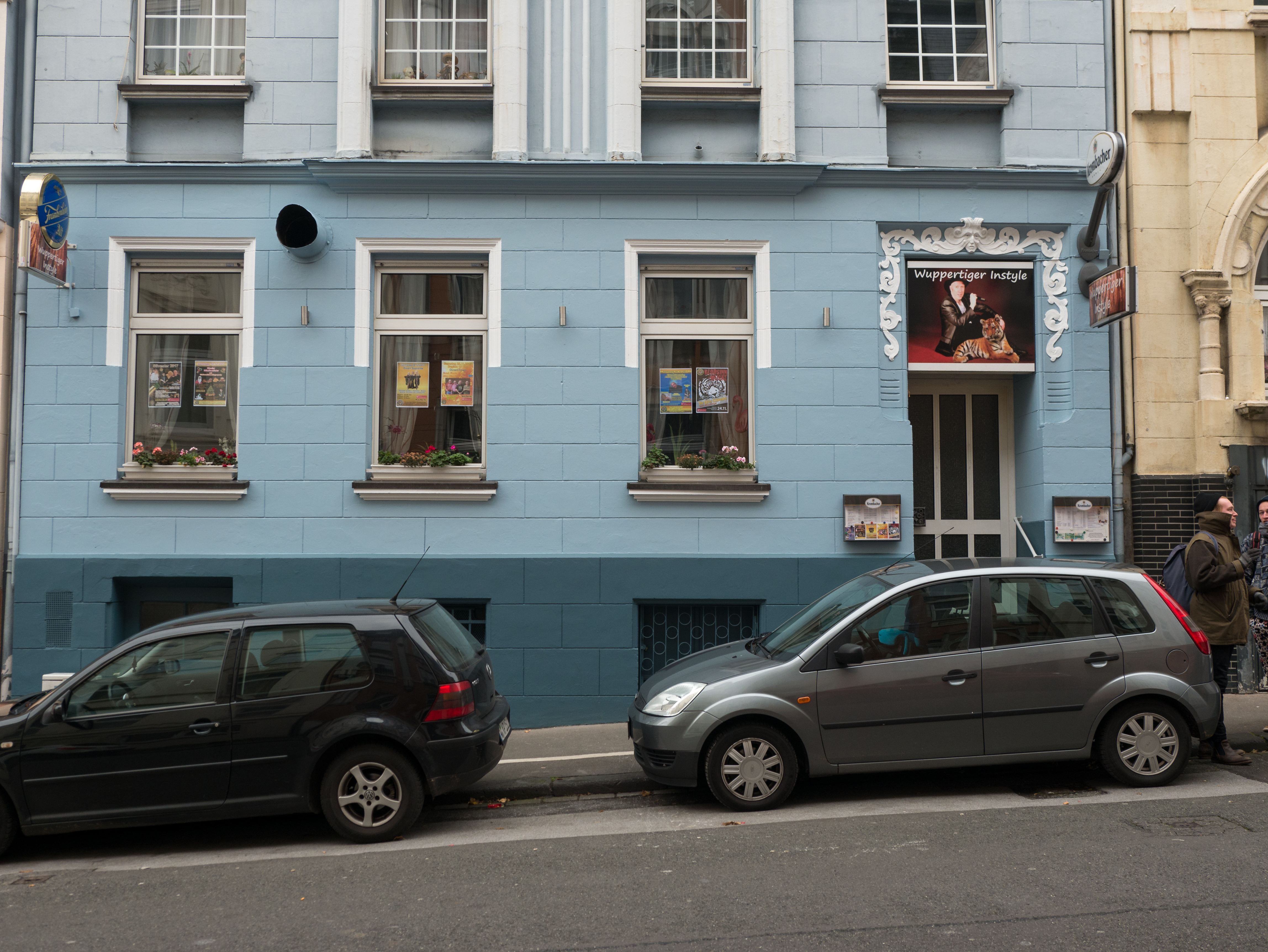 The location of the now-defunct Intakt venue, where the band played their first concerts.

Finding their place in a smaller city without a sizeable scene of likeminded collaborators soon proved to be a difficult issue – a problem that’s only partly the result of Darjeeling’s singular style. ‘We’re on good terms with the people we work together with, but that kind of thing just doesn’t exist here’, notes Jan. ‘There’s never been a scene with bands doing something similar to us who would have pulled significant crowds’, Till adds.

‘It’s different in bigger cities like Cologne, where all the local acts know and support each other, even if they come from different backgrounds stylistically – and of course, you have a fertile soil there, with people who can actually make things happen.’

Finding niches as long as its possible

We’re now standing in an industrial area, within sight of both Darjeeling’s old rehearsal space and a backyard mosque, before the doors of one of Wuppertal’s most exciting venues, the Börse (‘stock exchange’). Well-known German bands like Isolation Berlin, Die Nerven, Messer or Gurr have played there in recent times. As it turns out, its booker Felix Dumnick is a good friend of the band. ‘He tries to establish a location in Wuppertal that books those kinds of indie bands. It’s all a bit more punk-leaning or hard-hitting.’ Just as we’re talking, Felix is walks out of the building. After a quick chat about the upcoming show at the Börse, Markus recounts their recent gig in Bochum: ‘We all thought it would be shit, but it turned out super fun!’ – ‘We were super stoked, the audience was super stoked, I think it was the first time that random people were screaming and shouting inbetween our songs’, adds Jan. 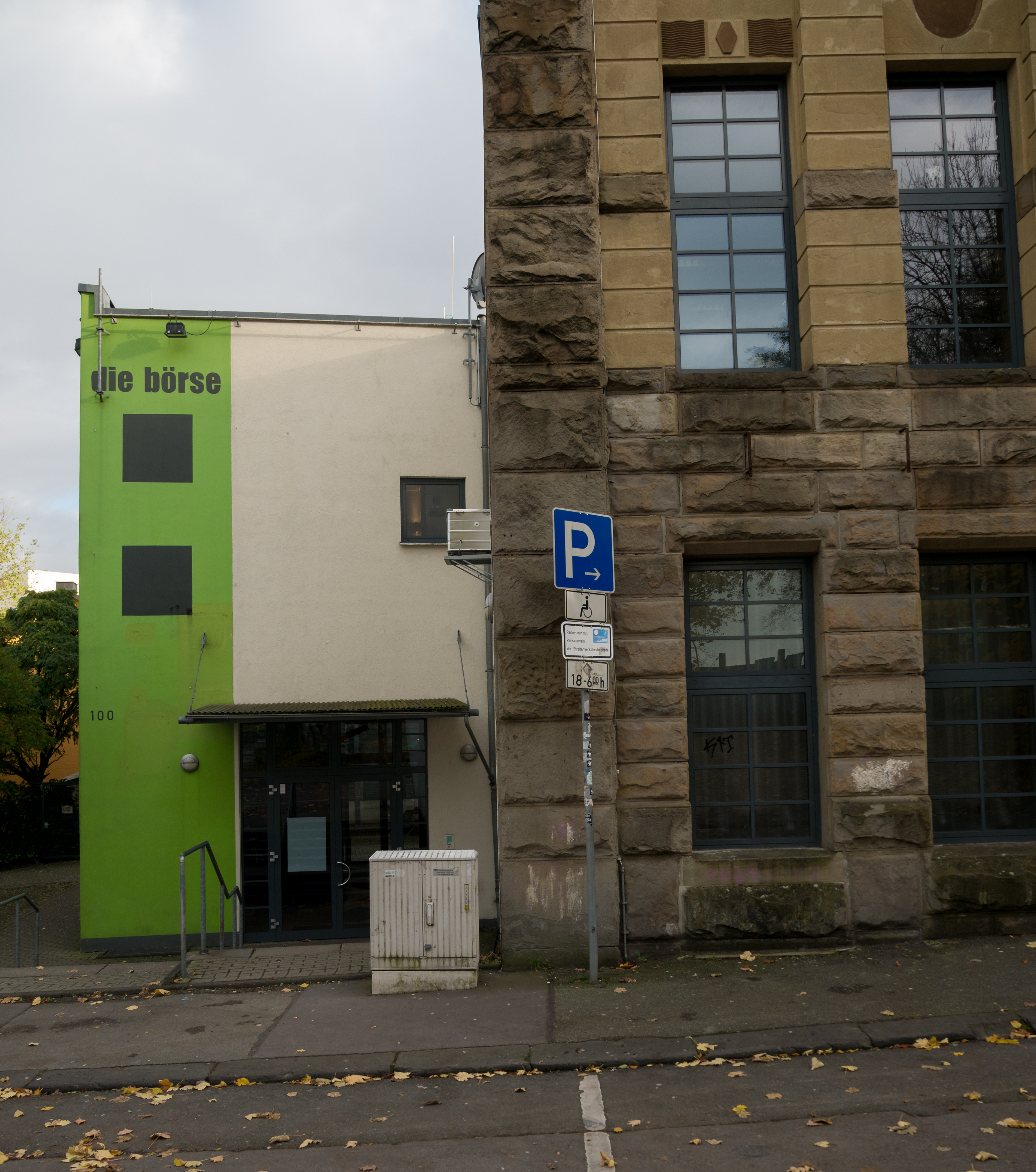 A short trip with Wuppertal’s famed suspension railway brings us to Elberfeld. While the centre is situated in a depression next to the river Wupper, the terrain soon starts to rise steeply and gives a first view of the Nordviertel. As we pass the spray paintings next to the recently relocated venue Loch and start to climb up the stairs towards the Ölberg, the three guys recall the venue’s turbulent beginnings: ‘Its origins were parties in vacant mansions, which you were invited to through letters. I never got invited, but I went to one of them anyway’, Markus remembers, and Jan adds: ‘It then moved into abandonded industrial halls, where they also located artist workshops. It definitely was the place to be back then.’ Almost en passant, he remarks: ‘They’re building lofts there now’, which aptly characterises the underground scene of Wuppertal: It’s carving out niches in commercially unattractive spaces until gentrification forces them to fold up their tents and settle elsewhere. 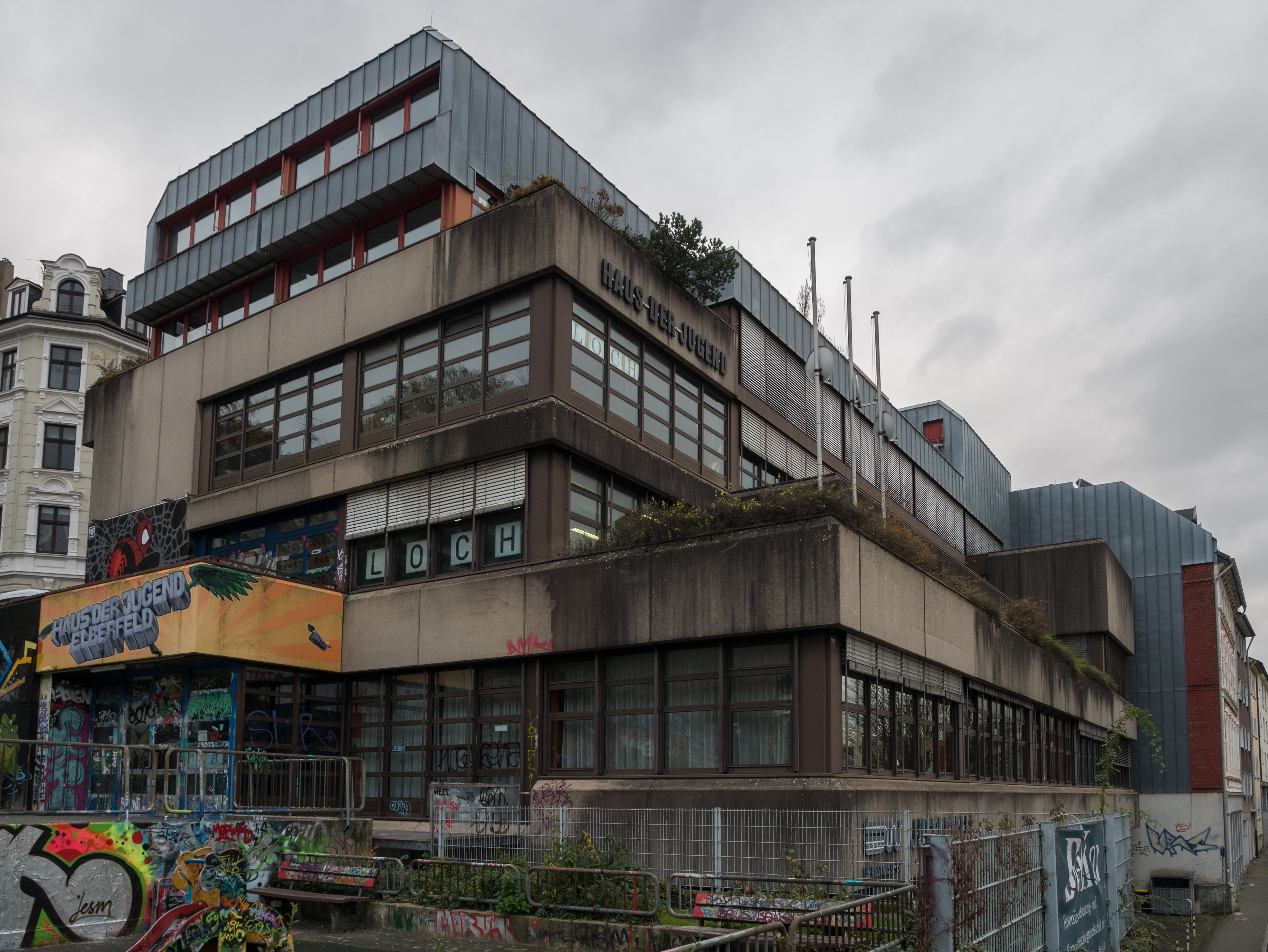 The Loch, formerly titled Sommerloch (‘silly season’) because its events used to take place in different locations around Wuppertal, and only during the summer. Since it has taken up residence at a youth centre in Elberfeld, its focus has shifted from electro to jazz events.

The logical endpoint of this phenomenon is what we see as we arrive on the Ölberg. Dominated by historicist and Gründerzeit residential buildings, it stands in stark contrast to the post-war modernist architecture that dominates most of Wuppertal, and just like similar quarters such as Ehrenfeld in Cologne or Kreuzberg in Berlin, the people living here come from diverse socio-cultural backgrounds. As we are talking, we pass record shops, tiny art galleries and barber shops, but also Turkish supermarkets, cultural societies and small kiosks. 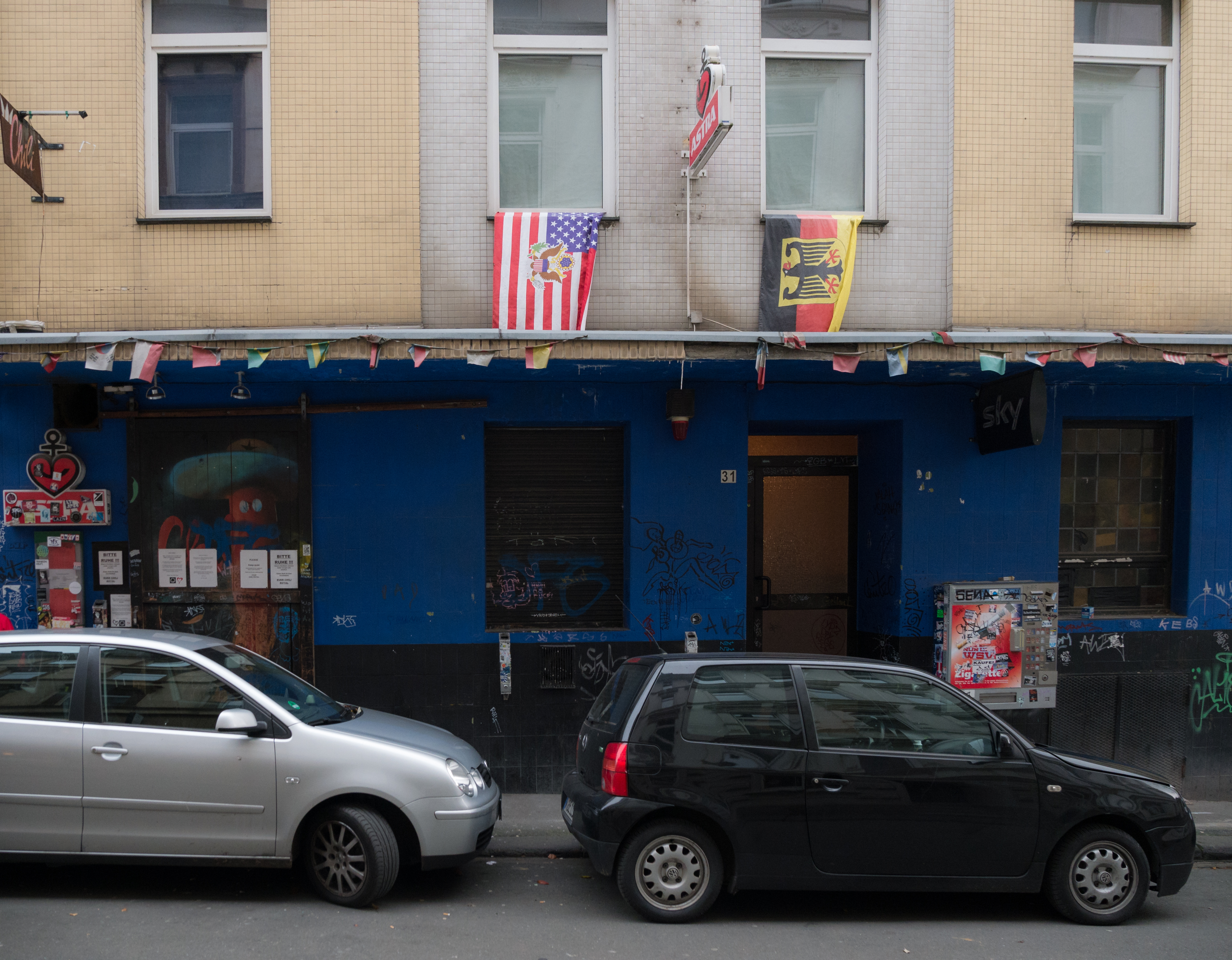 Chili, the band’s favourite pub in the Nordstadt quarter.

‘When we had completed our first demo back in 2011, I gave one copy to the owner of the Chili, with whom I used to chat about music a lot. He found the demo awesome but didn’t tell me that. He did show it to Thorben [Doege] though, which opened up a lot of gig opportunities for us. He’s our live drummer now.’

However, after crossing an arterial road, we find ourselves in different surroundings, where the buildings are barer, more blue-collar, and the historicist facades preserved look less polished than on the Ölberg. We are now on the way to Utopiastadt (‘utopia city’), an old, defunct railway station building that has been repurposed as a creative space and concert venue. As Till explains to me, there is more to the initiative than just being a hot spot for the local scene. One of the plans involves converting the stately waiting hall of the station, which is currently being used as an storeroom, into a concert hall. It would admittedly be a much more representative venue than the atmospheric, but cramped Hutmacher bar, which is being prepared for a concert while we sit down in an adjacent corridor. 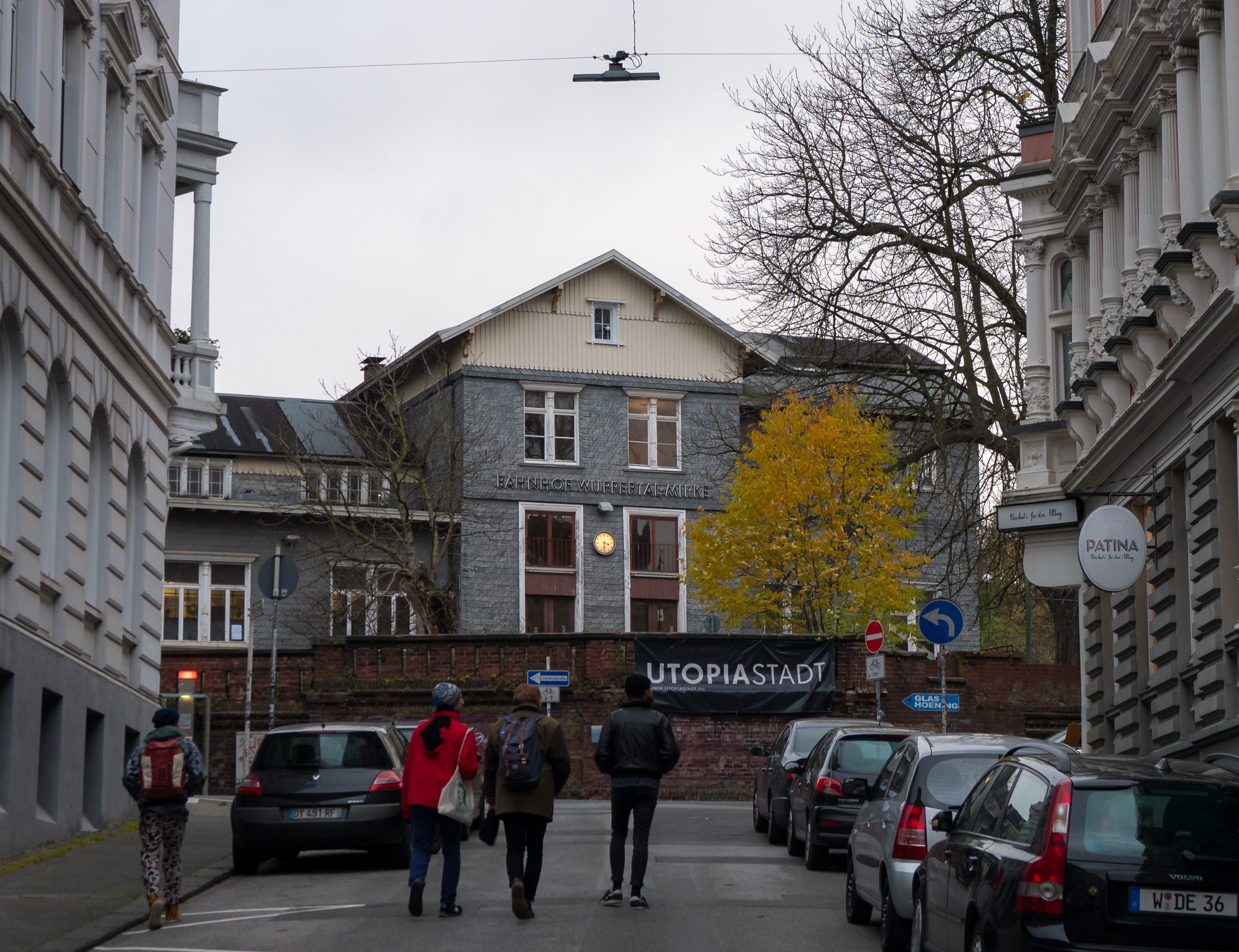 ‘The people who are active here try not to be an UFO that has just landed in this quarter, but get the residents on board. They want to find out what happens in the quarter and what people here really want and need. In a way, it is a little bit of everything – and then, just a little bit more.’

Generating confidence via your hometown

It is at Hutmacher that the ascent of Darjeeling came to a momentary peak – both the release of their first proper single I Won’t Be Waiting Till You’re Gone and their debut album were celebrated here to an unlikely rush of concert-goers. The modest income the band now generate from concerts permits striking paths that were not possible back in 2016: ‘We were basically operating on an ultra-low budget’, explains Jan, who produced the record along with bandmate Markus and Peter Kanngiesser. From that viewpoint, hearing old friends from school say ‘You’re doing really well right now!’ amuses Till, who is still amazed by the fact that people are increasingly willing to spend a tenner for a concert of theirs. Despite the shiny videos and promo shots on social networks, being an independent band in today’s age requires a lot of persistency and hard work. 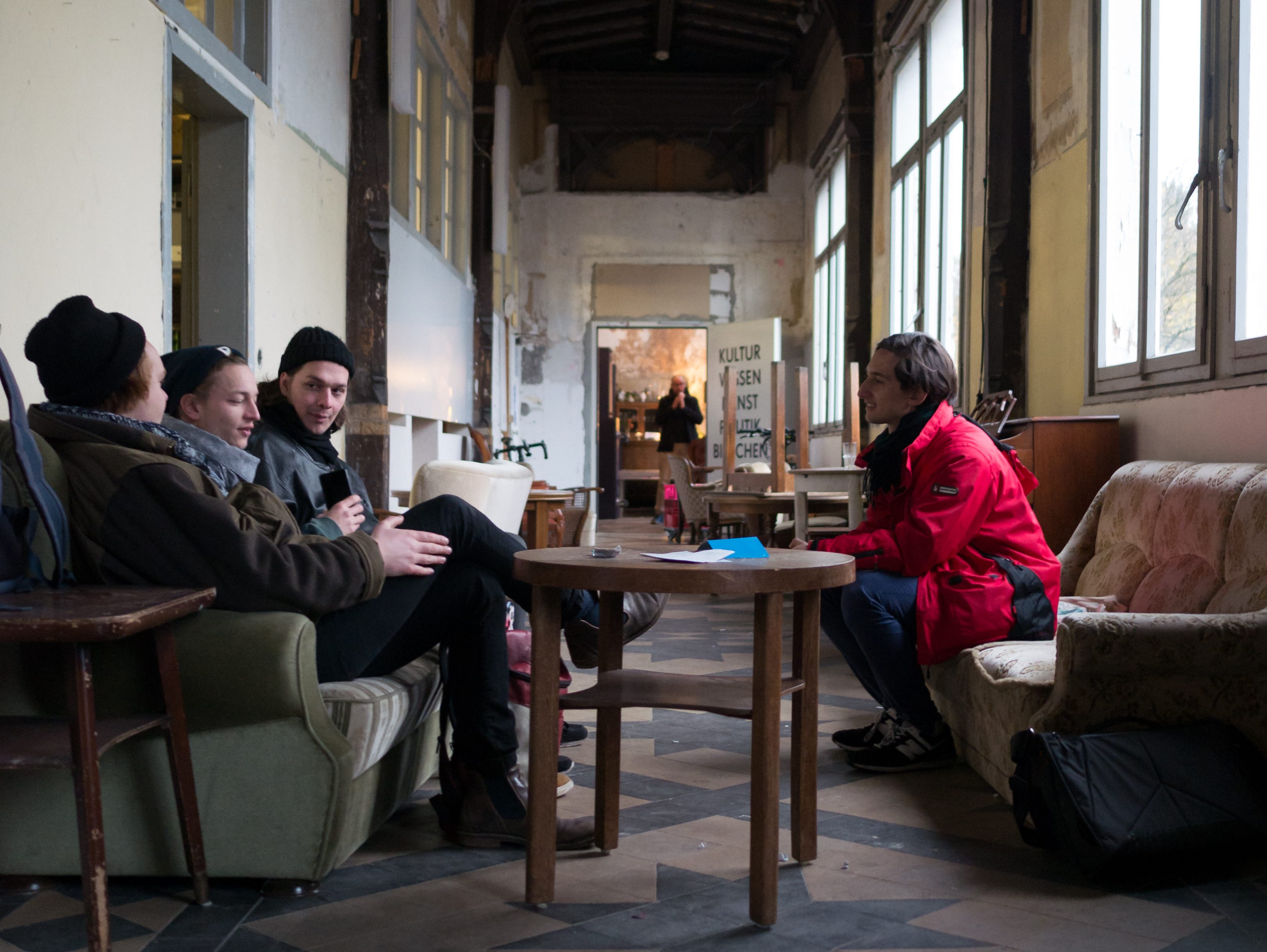 In that sense, growing up in Wuppertal both as individuals and as musicians could be deemed a school for life: ‘Nothing is handed to you here and the circumstances are not as good as they are in Cologne. But when you’ve reached a certain level, you need not fight as hard as elsewhere’, Jan thinks. ‘We have a support here that permits us to sell out a concert in our hometown, and that gives you the confidence to move beyond the city boundaries.’ Till adds: ‘I feel like the citys provides open spaces. There are still things left to do and niches to occupy.’ It is an exciting thought to observe the awakening of a scene, I come to think, but even more intriguing is the prospect that this is just the beginning of a journey.

Darjeeling have just embarked on a tour through Germany in support of their debut album. Find the dates right here.

All photos shot by Christian Isenbügel for NOTHING BUT HOPE AND PASSION.