Sorry, I can’t start this one with a nostalgic personal story about ‘my first NME’, ‘my favourite story’, that great time when some famous British indie rock musician talked shit about another. In fact, I never owned an issue of the New Musical Express, due to the obvious problem that I simply didn’t grow up in the United Kingdom. As a native German I was raised by our national equivalents of the iconic British music magazine, mostly ‘Musikexpress’ and sometimes also free giveaway lifestyle magazine ‘Intro’ (mainly because it was free, not because of profound journalism). I once gave my parents a subscription for the ‘Rolling Stone’ magazine and found myself flipping through it every now and then. But I basically bought my last printed music magazine around 7 years ago – and that’s exactly the reason why the NME now stops releasing its print issue after 66 years! Well, at least to some degree.

Well, I won’t go for an extended rant about the digitalization of media right here. You’ve probably already read countless articles about the struggle which is real and simply undeniable. I don’t think print will ultimately die but it will be reduced to a minimum, a niche for special interests, a bit like the vinyl for music lovers. It’s the fact that many traditional publishers are still ignoring that fact and basic understanding of what their future might look like that is really bothering me. The majority of the German music magazine’s got a quite boring online representation and same goes for the NME. It feels as if they just tried to use the formats from the print era and put them on their website while also adding horrible click bait to it. If you take a look at the recent ‘news section’ of the NME it’s just a lot of yellow press like celebrity stuff, the Gallagher brothers fighting each other via Twitter and ‘everything you need to know about the new season of Stranger Things’. The digitalization made a lot media outlets simply loose their guts. Instead of giving the people what they should care about they somehow switched to give them what they want in the most primitive notion. It’s a vicious circle because after half a century of godlike rule-making the NME simply lost track in the speed of the digital age. If you add economic dependence to it you get a deadly dose that ultimately led to this painful demise.

After the golden age

And that also brings me to this lovely little page you are currently looking at. Of course, NOTHING BUT HOPE AND PASSION has never been or will never be as big and important as the NME but we’re facing the same basic problems every independent publisher these days. In my opinion it all comes down to two basic questions:

Who is paying for this work?

Who wants to consume it anyway?

This might sound simple but it’s essential. As we’re (hopefully) moving towards a society where information is available to everybody all the time without limitations we all need to question ourselves: what are we willing to invest in? Do I really need the subscription for a newspaper these days? Am I taking the work journalists to for granted or do I understand that good research and profound skills need their time and deserve to be credited? 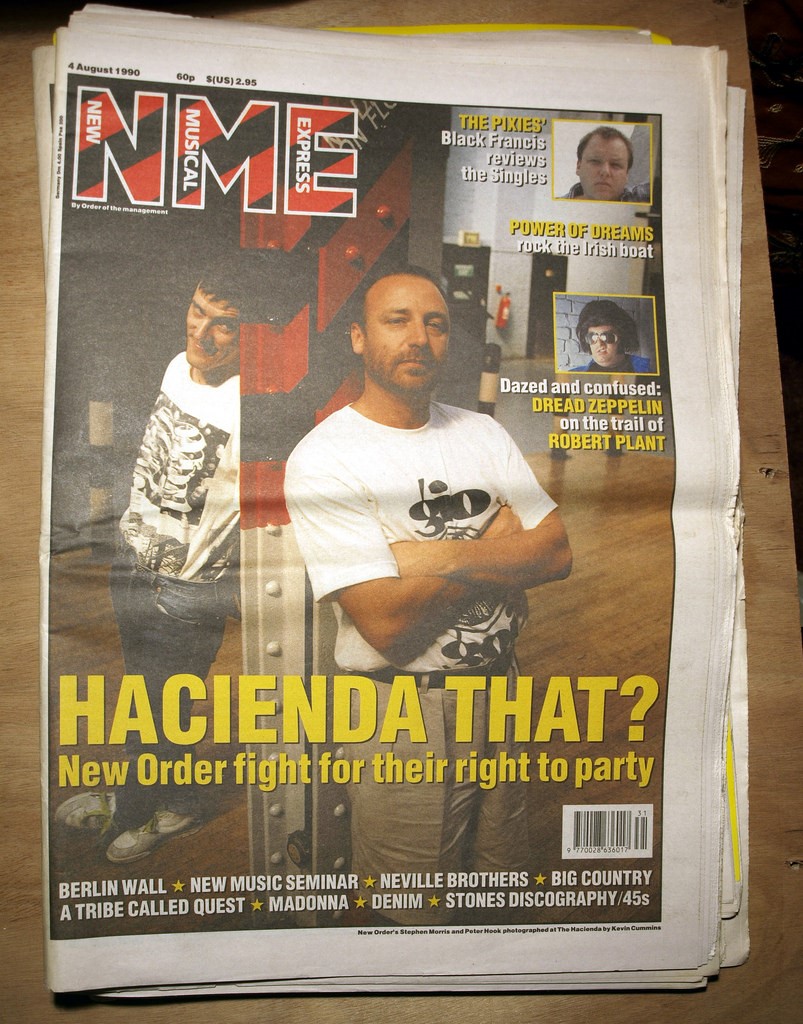 The high times of the Hacienda? Photo by Badcreeb Records (CC BY-SA 2.0)

You don’t believe how many people I meet who are still not willing to pay for, let’s say, Spotify (which is giving artists way too little anyway but that’s a whole different story) – there are first attempts to empower people to pay again for that content which is just fair but we’re making baby steps here. A whole generation (us millennials) got used to getting everything for free from the World Wide Web, whether it was our music or our movies. We’re beneficiaries and victims of the pace the digitalization showed over the past twenty years. I for example would have loved to be a professional music journalist but I entered the whole business around seven years ago at a point when the scene was already starting its downfall. I was a bit too late for the glory 90s and 00s era where music journalists were treated the same way as big beauty influences and celebrities these days. A lot of those folks from this era are still around, running the remaining music media, refusing to change certain manners, looking helpless at their own impending decline.

Taking risks in an age of uncertainty has gotten rare. And you still wonder why a really boring person like Ed Sheeran is the world’s biggest pop star?

And that brings us to the second question and the honest reflection on whether we actually need that sort of music journalism anymore in the 21st century. Being in charge of NBHAP for a while now I started question the whole format and idea every now and then over the past years. It’s a healthy way of getting rid of outworn structures and ideas. I cut the news section, I cut categories, I cut the countless record reviews and I don’t know why we necessarily need traditional interview formats anymore. That’s why us folks decided to let the artists curate own musical selections, rather play cards with them, talk about goddamn Hunter S. Thompson or let them improvise spontaneous music instead of doing yet another meaningful acoustic session at an old church (no offence to churches, tho). Because in an age where the music and your favourite stars are available at 24/7 a lot of these old-fashioned categories don’t make sense anymore. Why do you want to read a record review if you can listen to the new release directly on your technical device? You don’t need to go to a record store anymore to access new music (but pleeeease support your local record stores, everybody). You don’t need to get insight into the private life of your artist if they decide what they want to show via their own Social Media channels. And what if you want to discover new music? Well, than simply follow the beautiful algorithms of Spotify, YouTube and Co. which will guide you, right? It makes the majority of our job pretty redundant.

Sincerely recommended to you by the New Musical Express

Alternatives to the algorithms

As you can see, whenever a piece of the iconic and old-fashioned media world that used to worship the value of music and art disappears it brings you close to an existential crisis. There’s a decline in the value of art anyway, whether it’s the ‘everything’s for free’ mentality or the ‘everything sounds the same’ spirit of contemporary mainstream pop (and often also so called ‘indie’ music). There’s too much music, it gets replaceable and therefore boring and braveless. How many Ed Sheeran’s more do we need? How many soulless major label productions that still try to copy everything Major Lazer did three years ago? And if these people own the algorithms of the streaming services you’ve been given no other choice? I mean, have you heard these playlists, Spotify compiled on behalf of their major shareholders? There’s a clear lack of surprise and obscure endeavours in most of them. But of course, not everything the people at the streaming services do is bad as the whole democratization progress itself is pretty wonderful, obviously. The reason why I complain is because I do believe in choices, in an honest and true alternative to what is considered to be the mainstream. And I also do believe in the human factor behind it all, the stories and the dedicated research besides the safe-playing algorithms. How else would you find great new music like Bergen-based sad pop duo The Other End, Swedish wave poppers Wy, all these lovely new artists our editor Austin just met at by:Larm festival and pretty much all the exciting new artists we pick for you in our Daily Tune category.

We don’t get regularly paid for all of this, we do that besides our day jobs (actually I should be working right now), simply because we love music, want to support great art and give those a voice who deserves it.

Just like the NME it’s difficult to reach you folks these days. Our daily life gets more and more accelerated, our feeds are overloaded with pretty much everybody screaming at you to take a look at them. And after years of getting publishers addicted to Mark Zuckerberg’s Facebook his Social Media monster is now on the verge of decline, cutting the algorithm in such a way that it makes the visibility for a media like ours ridiculously low. The times are constantly changing and adopting to them can be frustrating. All I can offer you: If you like these stories, the sounds we pick for you, the music we compile over at our playlists, the alternative we’d like to offer, you are happily welcome to stick around a bit longer (ever heard of ‘bookmarking a page’?) We’re planning to do that although the way we do it might change every now and than. But as long as these five letters – NBHAP – show up somewhere you can be sure that there’s actually hope and passion behind it.