With Fat White Family‘s third album Serfs Up, the enfant terrible of British garage music returns. After their last record Songs For Our Mothers (2016) and their split over heroin addiction, both Lias Saoudi and Saul Adamczewski focussed on sobriety and releasing music with their spin-off projects Warmduscher (Saodi) and Insecure Men (Adamczewski). Their third album steps in a different direct than we’d imagine. Serfs Up, released via Domino Records, is more disco than garage. The band also teamed joined forces with Roisin Murphy for their Tastes Good With The Money video, while Adamczewski opened with a solo-set for Jessica Pratt in London.

As I meet Lias and Nathan Saoudi of Fat White Family in Berlin, I am forced to scratch my original interview idea. I wanted the Saoudis to guide me through the Lady Gaga catalogue, because the band has been hanging with the Oscar-winner back in 2016 while they were touring in New York. But it turns out quite quickly that the brothers don’t really want to speak too much about Gaga. At least the Just Dance video turns out to be a good starting point for our interview.

‘Lady Gaga is the LIDL version of Madonna’

Nathan: All that I’ve got to say about Lady Gaga is that she’ll never be a rapper.

Has that happened to you before?

Lias: No; I’m really good at keeping hold off my phone, actually. Saul keeps losing his phone, but I’m quite solid.

Where did you party in 2008, when the video was released?

L: In 2008 we partied in London, I’ve lived in North London at the time. I’ve started in Camden, then I moved East and then South. That would have been East London days, when Nathan first moved to London, he called me up from Northern Ireland and told me he was thrown out of school, asked if he could stay at mine for a week and never left, so that was 15 years ago.

Lias: Does this feel quite retro to you?

Yeah, it’s something people would listen to ironically nowadays.

L: A lot of people probably listen to that ironically now, yeah. There’s an art to listen to music ironically. Gaga is not one we listen to ironically, is it?

Nathan: I don’t listen to Gaga, man. I’ve done her on the acid test and it didn’t stand up.

N: You do a bit of acid, listen to music and see how genuine it. You can see through the layers of bullshit very easily. Lady Gaga didn’t stand up, it makes everyone (groans)

N: Yeah, so (it’s) maybe catchy when people get up and get into action to a job they don’t like but other than that.

L: It’s never been something I’ve been a big fan of, I mean she’s obviously a very talented woman but I feel like she’s kind of a sort of cut-price ‘Lidl Madonna’. If you couldn’t afford the Lidl from Marks and Spencer, you’d go get your Madonna from Lidl, you just get Gaga. Its got all of the glitter and glitz, but if you’d scratch it away, there’s nothing particularly great about the songs.

L: She goes out wearing a meat dress, and shit like that, but there’s never anything particularly risqué about it, like some of the great pop stars of the 70s and 80s, Madonna was really pushy and shit with the pro-sex thing, she was out there. Where I think Gaga is a bit more like part of a machine, I know she has an Oscar and comes to our shows, but that doesn’t mean I’m not allowed to (…)

L: (fumes) I dont hate.
N: It’s just another ticket sale to us, alright?
L: I think she got on guestlist.

N: Did she? Jesus Christ.
L: Somebody told me she came to Brixton Academy, she was in Tulse Hill and to Le Poisson Rouge in New York. 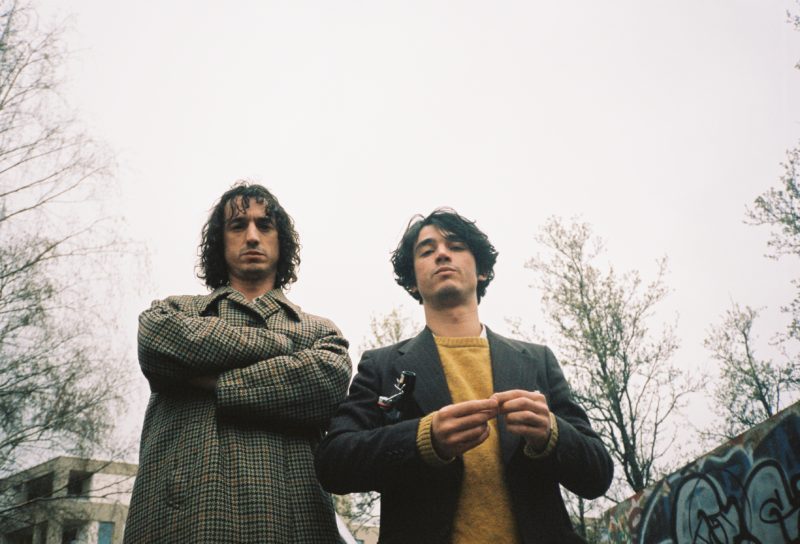 I wouldn’t imagine you guys listening to music ironically.

L: I do listen to music ironically, sometimes I lose track of whether it’s ironic or not. For instance I listen to George Michael. I think for a long time Saul thought I was listening to it ironically but it crosses a point where I’m not listening to it ironically, I’m really really into it. Same with Yeezus from Kanye West, that might have seemed ironic at one point but it became quite a serious passion for that record, so what do I enjoy ironically ?

Nathan: Sex. (Both and interviewer laughing)

The favorite is Blue which is the B-Side of Club Tropicana. I also like both version of Freedom. Outside was a great fuck-you kind of thing, that video where the disco ball comes down in the cubicle, that was a great reaction to public scandal.

Creeping out of shadows

The info sheet on the new record compared Serfs Up to Alan Vega. Do you have anything to say about this?

L: I do another project called Decius which is Acid House meets Alan Vega, there’s a track called Come To Me Villa online. I’m doing an album with them while doing this. That influence cracked in a little bit, because the producer of that record, Liam May, he’s the guy that co-produced this album and the couple last records, he’s more kind of rooted in House music, dance music that kind of stuff. So that cracked in a bit on the album on a few tracks, especially on Fringe Runner. I love Alan Vega, he’s great.

Is there any current music you’re enjoying at all?

I mean, I don’t listen to a lot of new music, I really liked Baxter Dury’s last couple of records, I really liked Miami, I listened to it when it came out and I listened to it recently, I really love it. I think he’s one of the only great lyricists in operation. I like he’s managed his father’s legacy, that’s a tight role for everybody. I met a lot of famous people’s kids recently, that’s a really poisoned chalice in a way. Creep out of a big shadow like that. Probably all the Moss, Gallagher kids.

L: I bet, how many of them ever make decent records. Enrique Iglesias and Baxter Dury, that’s about it.

N: There must be more.

‘The only people who buy records are little kids’

What about Billie Eilish? (I introduce both to Billie Eilish’s Bury A Friend video, as they haven’t heard of her before)

Nathan: Her name sounds like she is taking a piss on Billy Idol.

Nathan: That’s not pop culture. That’s banky culture of music, it’s not really pop. Pop is the exploration of something familiar and something new and something familiar at the same time. It has to be a bit dangerous and risqué. Those are the three main ingredients of classic pop. Thats banky, a couple of guys with loads of money formulate what this thing is, thats exactly the same as the previous thing with a new face. That’s banking, the political structure. (mimes American accent) ‘Let’s place him here, Obamas good, Trumps bad‘. That’s banking culture seeking in music.

L: The only people who buy records are little kids. Nathan’s right, its a machine extracting cash from people that are under the age of 16 who are vulnerable to massive advertising campaigns and the way they manipulate, the powerful labels can push everything. You can polish a turd. I’m not clued in of whats going on, I have my own personal reserve of cynicism and affections and I don’t look around. I became so disenchanted by the mainstream a long time ago, that it became a mystery to me. So its not surprising that I see something with a billion clicks that I’ve never heard of before.

How is it like for you with now being on a record label that also manages Arctic Monkeys?

L: More interviews (laughs), bit more travel. We’ve been on PIAS before, it’s not a million miles away from that, I don’t think we’re in the same conversation as Billie Eilish really. Domino has a solid business structure, Arctic Monkeys make all the cash and then they can fund small idiocratic projects like our own, so it kind of makes sense to me. 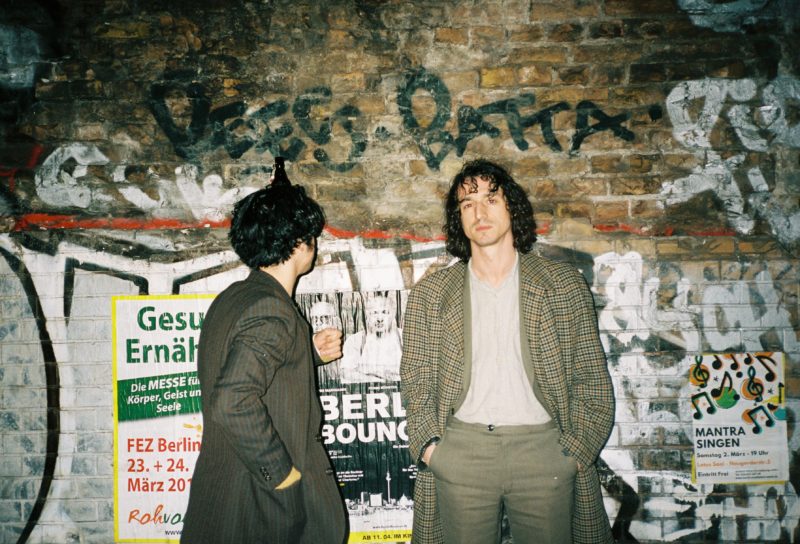 What I notice about your work is, that it never really worked as well in Germany as it does in Britain.

L: It always disappointed us that the Germans didn’t really get it, I could accept the Americans didn’t get it. If the French like your stuff and the Germans don’t, thats never a good sign. (laughs)

Most of Germans were probably turned off by Champagne Holocaust and Goodbye Goebbels.

L: Goodbye Goebbels didn’t help the sales. We are all really interested in history and a lot of what we do is playing with historical references. German history has always been completely fascinating to me, its probably the most interesting history there is. And we love Berlin, we lived here for a bit, it was a great time. The whole band could go to the park and just plug in a PA and do a gig, you couldn’t do that in Regent’s Park. Its a much more open place that it is in England. Its got its own music.

We were here 8 years ago, put out the first record and moved to Barcelona to become buskers but it’s completely illegal to busk in Barcelona. So we moved to Berlin and I had a little room in Kreuzberg in Waldemarstraße and we lived here for a summer. We used to play pop songs on Warschauer Straße, Nathan used to play the construction fence as a drum, me and Saul had this little amp where you could plug a mic and a guitar in. Every time the train came in, we played for 10, 20 minutes, collect change and that was our time here.

And then you went to Berghain with the change.

L: I did, yeah. I was once at Berghain, it was fucking great, had a good old time. I got rejected twice, I looked too straight, man. Nathan started a fight in the queue so he didn’t get in. I looked too much of what I am, too hetero. They were ‚No, you can take the walk.‘ The third time I got the right look, hairs sleeked back, put a little vest on, really camping it up. And I got in there, Sunday afternoon, lunchtime, apparently that’s a good time to go. The first hour I was like ‚What, I can‘t‘ and then the MDMA, Ketamine and Speed kicked in and then I was there for 24 hours, lost in these waves of Techno. I didn’t know anything about that type of music, but right there and then it was the most important thing that ever happened, everyone talks of it as a spiritual experience and I have to say I kind of agree, it was really affecting, one of the best things I’ve ever gone to.

Fat White Family‘s new album Serfs Up! is out now via Domino.