Just by a quick glance at the cover of their third record Californian Soil, the overturned balances of power of the acclaimed dream pop darlings London Grammar is more than visible: Gone is the collective aura of front singer Hannah Reid along with her two companions Dan Rothman and Dot Major, giving the voice and lyrical prowess of the band leader a singular stage, confidently seated amidst an isle of flowers, floating across endless waters. California, here we come? Well, not quite.

“For me it’s a very vulnerable album. I think I made myself quite vulnerable on there, it’s very personal to me, like the lyrics”, Hannah emphasises early on in our video call. And not just by that one can gather the major shift that has been going on ever since 2017’s sophomore Truth Is A Beautiful Thing: Hannah Reid is ready to claim her place in the limelight and she has something important to say.

‘I felt like, we either release an album that’s exactly the same, or we experiment and try and be brave, rather than sort of make something that’s half-hearted in any way.’

“It’s a feminist album for sure”, Hannah is keen to articulate and adds that “there’s a lot in there about the female experience”. Both fed from her “personal and professional life”, the lyricist  comes to terms with the underside of the project’s success and addresses the experience of misogyny, especially in the music industry branch – a struggle which probably became even more visual simply by being surrounded by two men as fellow bandmates:

‘The music business time and time again made me feel like I had to prove myself in a totally different way to the boys… Being in a band protected me and gave me support, but then also I had such direct comparison all the time with how they would be treated versus how I was being treated. It was quite shocking, I definitely had moments being in studios and having an opinion and just that opinion being taken as me being difficult as opposed to me having integrity and what I believe in. I had a thousand moments like that.’

Stepping out into the open like that is a bold move, even more so, as the pieces of Californian Soil not only entail a political dimension, but are part of an aesthetically charged body of songs. Wistful and melancholic for sure, as this has always been London Grammar’s signature, but also “angry”, progressive and way more upbeat, that the eventual glimmer of hope is not only metaphorical, but rather a real event. “What’s kind of nice is that the music is probably the most upbeat in some ways. Especially in terms of rhythm”, Hannah explains. “So the lyrics can still be kind of dark or melancholic but I feel like we’ve dressed them up in a way of empowerment rather than morose.”

Stepping out of the box

Taking back power like this not only entailed the strong thematic focus on the female experience in the art world and beyond, it also meant that Hannah overtook responsibility in the creative process way more than she ever held before. “There needs to be a leader of the band and it needs to be me”, she demanded early on in the process and as they got along, she also felt the need to claim the musical and production-related matters as well: 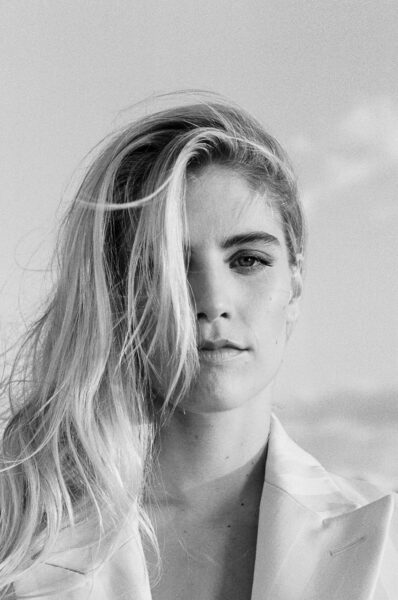 Leading with confidence, Hannah of London Grammar (shot by Will Reid)

‘I feel like I just, this time round, feel like I have more of a voice than I had in the past. I think it is in the lyrics, in terms of the production side of things. I played a lot more of the instruments, and a lot more of the synths. I think there were times where I put myself in a box thinking, I am just the lyricist, I am just the singer. I wanted to not just play that part this time.’

“I think that it’s not about me getting more attention or me kind of taking more of the limelight away from the boys”, she says, stressing that there needed to be built some sort of hierarchy for London Grammar. Not to have someone be in charge in general, but a character leading the crew. “I think all three of us took on other people’s opinions too much, were worried about what people thought about us too much.”

‘All the bands that I really love that have long careers, tend to have strong leaders or characters who know when to say no. It’s still a process, I’m still learning how to do that. Now we have that, people that respect us as a band, which is really great. It gives a thick skin I think.’

Bold is not only the lyrical and political determination, but the soundscapes of Californian Soil as such. Way more upbeat and daring than ever, yet without compromising their melancholic sentiment, these songs seem to want both halves of the spectrum – uproot pains and injustices of being a woman in a man’s world, and to entangle listeners into a stunning aura of sound, both upsetting and soothing.

The image of America then ideally encapsulates that duality, serving as inspiration as well as a deterrent symbol. It holds that idea that a beautiful state of things can carry in itself a dark twist, which needs to be addressed, no matter what:

‘For me, America has some of the most beautiful landscapes I’ve ever seen. Yet it does have quite a dark history, as I think the „West“ in general kind of has. I absorbed a great deal of Hollywood culture growing up. I absorbed so much of that and it’s only now that I reflect on all of that culture that I absorbed. I understand that there was kind of a darkness in there as well… I am using America as a metaphor for something being so beautiful but there being a kind of darkness there as well. And it’s a metaphor of my own personal experience I think.’

What needs to be done

Hannah Reid doesn’t stop though with the release of Californian Soil, and how could she? “What it requires is for people to try to be open-minded and self-reflective. That’s one of the hardest things to do”, she states and emphasises the urgent need to tear down misogynist structures, be it in the music industry or in any other system.

‘I feel like throughout time I do feel like women have always sometimes had to overcompromise, sometimes bearing the weight of a lot of trauma and hidden trauma. That’s very normalised in our culture. There are still so many women who survive really terrible things, that are actually very normalised. I guess for me that is kind of what the regaining control is. As I hit thirty, I’m thirty now, I felt like just in myself, me and my girlfriends were just figuring out who we are. I don’t really care about what people think about me finally. And it took like ten years.’

For all gloomy perspectives Californian Soil offers, it is not like the body of songs stops at that, however. “I really believe that things are changing and I feel very positive about that”, Hannah remarks eventually, though there is still a lot to be done. For all of you looking for an intro how that might sound, head right to the title track Californian Soil, which Hannah comments as follows: “For me it’s about being a lost woman finding herself. And I feel like I did with that song.”