From Fear to Freedom: The Transformation of St. Vincent

Last week, Annie Clark, better known as St. Vincent wrapped up the European leg of her new tour FEAR THE FUTURE with a performance on the BBC’s Graham Norton show.  There, she performed Los Ageless to a slightly bemused Hollywood set of Johnny Depp, Michelle Pfeiffer and Dame Judy Dench, before shuffling over in her exuberant costume suddenly looking very naked and alien outside of her stage setting. The set itself was just Clark singing and playing her signature guitar alone, over a p.a backing track, while silhouettes of female models parading around with different models of Clark’s guitar behind a bright pink background.

In this context – the TV chat show stage – Clark’s performance makes perfect sense. The restrictive amount of room and intentionally fabricated setting of the TV set is quite markedly different from the live music stage, one which artists either shine or shy away from but will almost always accept due to the increased promotion having so many eyes on you, which TV affords. What is more ‘surprising’ is that this version of Clark’s TV performance is faithful to her current live show incarnation: just St. Vincent, her voice, her guitar, her costumes, her staging for 90 minutes.

What (and who) defines authenticity?

To say that the FEAR THE FUTURE tour, which opens in her native USA next week, has split opinion would be an understatement. So far, all reports of Annie’s ‘one-woman stage show’ have been either been of absolute adoration or abhorrence. Clark’s detractors largely have complained about the fabricated nature of the show, questioning if she is being ‘self-indulgent’ or if this is something that was ‘worth’ their time or money and that age-old complaint that ‘live music should have live musicians.’ This is a fascinating response both in terms of St. Vincent’s current position at the crossroads of celebrity-pop-megastardom and indie darling and the question of ‘What makes a live show’ 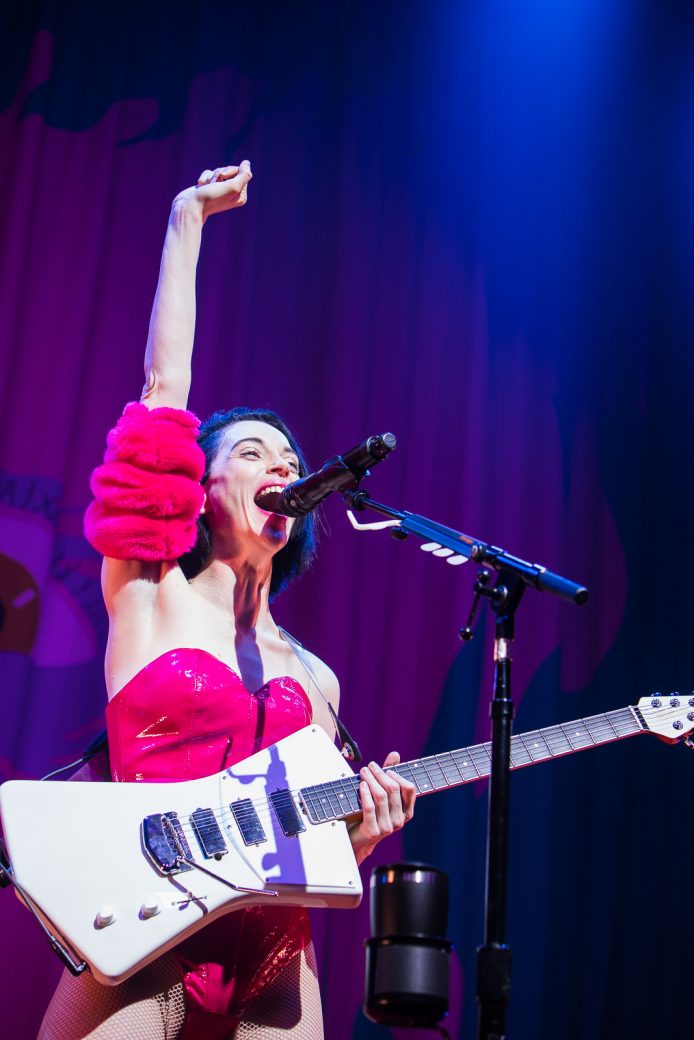 Clark’s recent real-life celebrity from her Grammy win for her 2014 self-titled album and a string of notable romantic relationships with models/actors Cara Delevingne and Kristen Stewart has made her a recent target of the paparazzi, making her somewhat cynical of a media who would allow this circus. As a result, Clark has been fairly defensive around her latest album MASSEDUCTION and subsequent tour. In an interview published in the New Statesman this week, Clark stated ‘I think it’s cool that some people hate [her current tour]’ addressing the response to the tour’s opening dates, while elsewhere she recorded a rather tongue-in-cheek, Carrie Brownstein-scripted ‘Interview kit’ hoping to answer any and all potential questions journalists might have surrounding this press cycle.

The show, which I attended in Berlin late last month, seemed to draw the same reaction her whole tour has so far. Some apparently were put off by the sheer aesthetics and fabricated performance of St. Vincent’s show, regularly asking, about both this and her new album, ‘Where is the heart from her earlier work?’ Clark herself defended this in the same New Statesman interview claiming ‘If a rapper got up on stage and didn’t have a live band, which most of them don’t, no one would be bummed at all. Why is the assumption that I need to have a live band onstage for something to be authentic?’

The ‘show’ – because that is the best word to describe it – sees an overture screening of Clark’s recent short horror film The Birthday Party (which shares much of the same stage design as this show) before a droning gives way to the right-hand corner of the curtain being pulled back to reveal St. Vincent, performing a low-key version of her very first single Marry Me. She wears bright pink and is aided by two large, male stagehands dressed in black Kevlar, armed with her guitar as a weapon, gunning down reworked versions of her ‘greatest hits’ to date in chronological order. After a quick intermission and costume/stage change, the second act sees Clark performing her new album from beginning to end.

Everything has led up to now

Over the course of the show, staging plays an important role in the same way any musical would. With every song, and particularly every step from album to album, the stage reveals a little more each time, something Clark herself has called ‘the trajectory from fear to freedom.’ The second act, i.e the MASSEDUCTION act, especially drives this idea home, full of images from the world of plastic bodies and hyper-sexualised world Clark finds herself in today, BDSM-suggestive imagery and all.

This trajectory can be traced across St. Vincent’s oeuvre too, which this chronologically arranged set encourages her audience to do. Clark has always been a member of the ‘dark arts’ with her music, but like this show, she has revealed it more and more which each album. Her debut Marry Me, which hit its 10th anniversary this year, was a strange chamber pop album from the mercurial artist, but had, on the face of it, a largely pleasant voice and face from the former Polyphonic Spree guitarist. Here, a decade on, Marry Me and Now, Now especially sound like the songs Clark perhaps always intended but was still finding her feet at the time. With every subsequent album, she has moved from the earnest debut towards the highly-sexualised, battle-ready warrior we see in front of us today, the latex-clad costumes alone are indication enough of this. 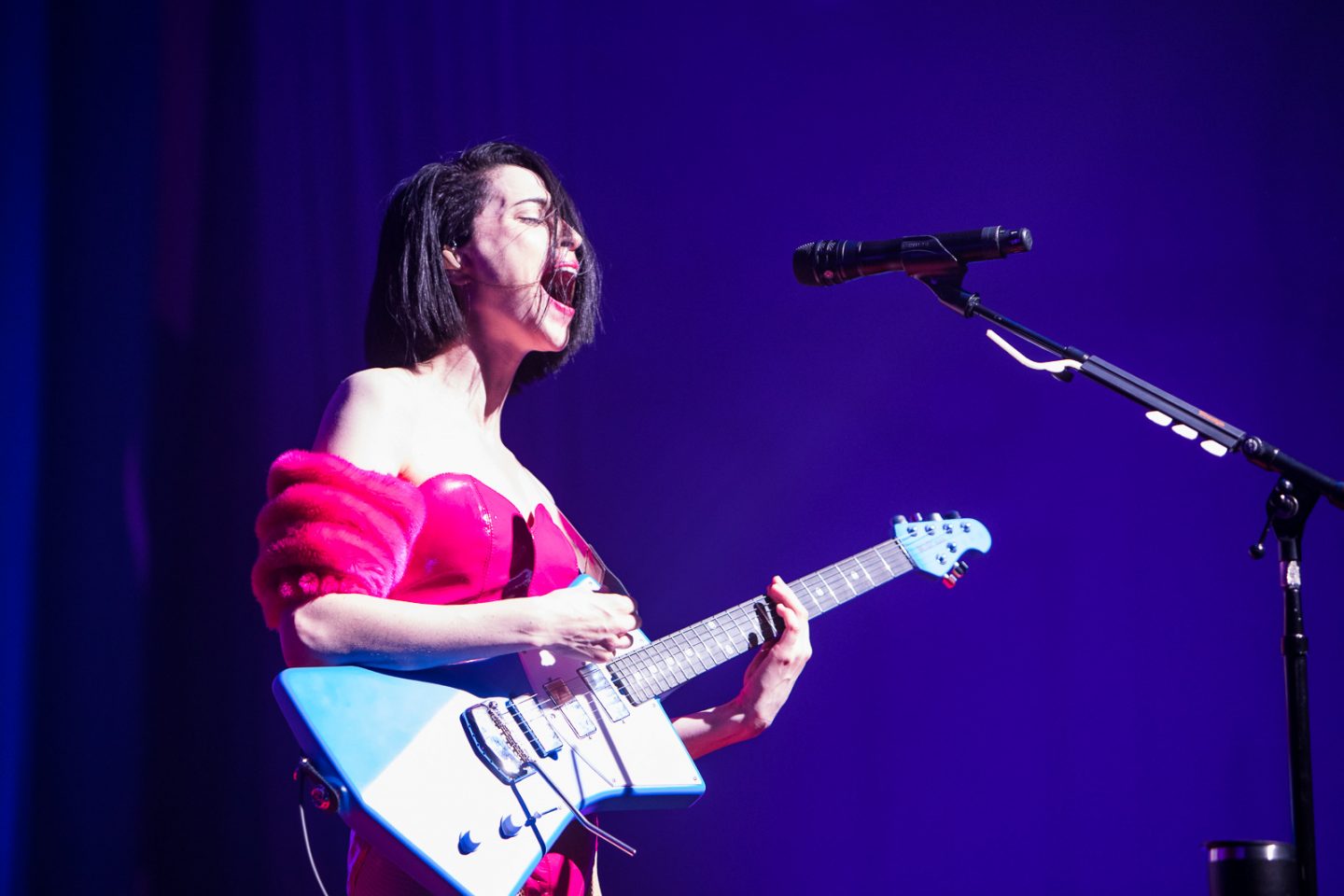 Actor Out Of Work and Cruel from Actor and Strange Mercy respectively especially sound massive here, regardless of the lack of a backing band. If you trace the songs in her set (see Spotify playlist) you get a 10-song album of increasing sexual intensity and anxiety that Clark has been building towards all her career, and possibly life, culminating on MASSEDUCTION. By staging her show as she does, both in terms of set-list and the physical set on which she performs, we get to see a snapshot of her life and career, mainly her rise from a ‘cute’ singer-songwriter to a queer-sex icon, up to this point.

This means, to answer the earlier question of ‘Where’s the heart?’ MASSEDUCTION actually has St. Vincent’s heart at its most exposed than at any point in her career so far, it’s just buried in a world of pills, sex and celebrity. This brave and vital show is an important statement of an artist – with no need for a backing band, because, she is the damn band – with real intent and command of her art and as time goes on, both this album and tour will, eventually, rightly go down as her best work.