Watching Tarot Card XVI Come To Life deals with the traumatic event. Tarot Card XVI is The Tower and it stands for danger and destruction – a fitting analogy for the events of 9/11. The mixture of ambient instrumentation and spoken word makes for a chilling atmosphere as the narrator tells the story of the afternoon that changed so many people’ lives. The artists create a dark mood and tell the story with unsettling calmness at metaphors making the tragedy come to life within the single. It’s the first piece of music from Aint About Me, a project from Lukasz Polowczyk that combines poetry and abstract sounds and today we’re happy to give you a first taste of it. Ahead of the release, Lukasz and Tobias sat down to speak about this moment they both experienced in different ways while being New York on the historic day in 2001.

Lukasz Polowczyk: You know that Jan only told me, right before we had our session, that you were also in New York on 911? I had no idea!

Tobias Preisig: Absolutely! I was cat-sitting in a friend’s apartment, about 200 meters from the towers! So, I heard the first explosion while I was transcribing some music. It was very strong. I looked out the window and saw the top of one of the towers on fire.

Lukasz Polowczyk: What was the first thing that came through your mind?

Tobias Preisig: I was sure that it was some sort of explosion related to a gas leak. You know the infrastructure in New York is pretty fragile.

Lukasz Polowczyk: What happened then?

Tobias Preisig: I decided to go to the pharmacy to pick up some photos that I had taken, it was all still analog back then. You have to bear in mind that in the States fire trucks are sent out all the time, even to small accidents so, of course, an entire army of them were sent to deal with the explosion at the Twin Towers. I didn’t think much of it, except that it’ll be exciting to watch the rescue operation. When I left my house, the second plane hit.

Lukasz Polowczyk: Did you see it?

Tobias Preisig: I didn’t see the plane flying because the buildings were too high, but I saw the explosion. And then I saw people jumping out of windows, injured people running down the street screaming. I closed my eyes and tried to get home as quick as possible, not to look at the horror.

Lukasz Polowczyk: So you saw the horror up close, because I was on the other side of the river, in Downtown Brooklyn…

Tobias Preisig: Absolutely. The phones were still working and I called the owner of the apartment, who was vacation in Italy. I also called my family, and as I was on the phone with them, the towers started to collapse. It was so surreal! They fell effortlessly, like butter. And a huge cloud of dust covered everything, and the phone went dead. It was silent for like two minutes. Super dark! I was standing there with the cat, looking out of the window. I waited for the dust to settle, I put the cat in my backpack and started to make my way up North.

Lukasz Polowczyk: That’s crazy! See I woke up to papers flying from the sky, the way I slept, I was facing the window. When I looked out I saw that one of the towers had this chip in it and there was smoke coming out of it. And then I saw the second plane flying towards it…

Lukasz Polowczyk: Yeah, but I thought it was a fire department plane that was going to drop something on that tower to extinguish the fire. I just woke up, so I wasn’t really thing straight, and this was all happening so fast!

Tobias Preisig: I can only imagine. It must’ve looked more impressive from afar.

Lukasz Polowczyk: It was like a dream. Literally. Something that you only see in movies, or in your nightmares, something that feels impossible, but it’s happening right before your eyes.

Tobias Preisig: Absolutely! So what did you do then?

Lukasz Polowczyk: I left my house to find out what happened, because at the time I didn’t have a phone or internet. On the street people were talking about the other hijacked planes, that it was terrorists, and that all flights were canceled. But I also saw lynch mobs. Like groups of angry men running around looking for Arabs.

Lukasz Polowczyk: And sad, and fucked up! After that, I went up to my rooftop and met my neighbour there, and we watched the towers still up in smoke. And then she turned to me and asked, do you think they will collapse? And I said, no. Count to ten, and they fucking dropped to the ground right before us.

Tobias Preisig: I didn’t see any of that. I guess, people in Manhattan were just fighting to get out of downtown.

Lukasz Polowczyk: You were in the midst of it all. But the crazy thing is that she left, and I was there all by myself, and the smoke had consumed everything! I couldn’t see anything. And then I heard more planes coming, and they were fighter jets. I could see them weaving in and out of smoke. And I didn’t know yet that they were American planes, I thought this was the end! So, I sat down to meditate.

The Smell of Iron 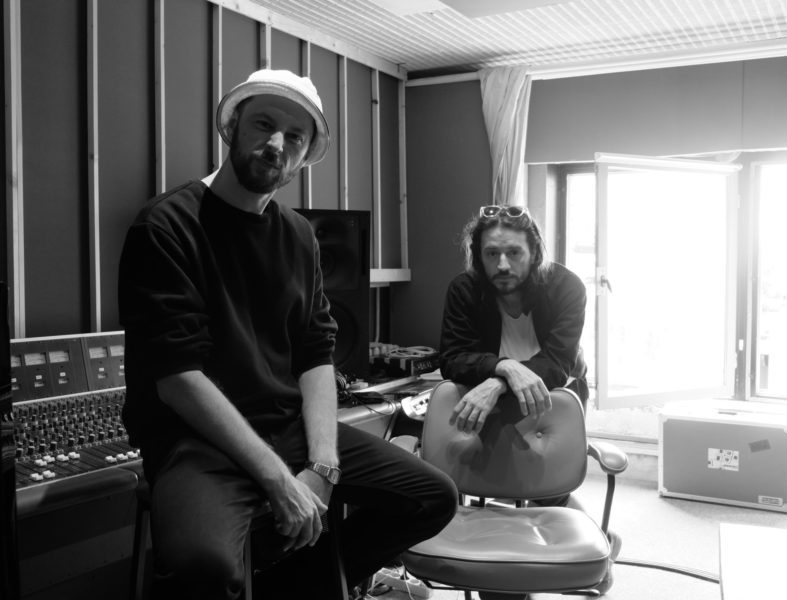 Tobias Preisig: The smell of iron followed us for more than a month.

Lukasz  Polowczyk: Was that iron? I remember that smell, it was around for ages. That night, I was making beats at my apartment with the windows open. The sirens outside. Everything in my apartment was covered in white / grey ash.

Tobias Preisig: So, you translated this into art right away, that’s good. I was in survival mode, just trying to figure out the situation with the cat…

Lukasz  Polowczyk: I didn’t know what to do! I was in shock, so what I did was what I did every day. The horror hit me much later. Mind you, from where I was you couldn’t see people jumping from the towers or the wounded. So, it was all much more abstract. When I spoke with people who had watched the whole thing on tv, they were more affected because they saw this thing up close and with multiple re-runs. I just saw some crazy shit from afar. I actually thought that the people inside were evacuated already.

Tobias Preisig: It was the same for me, it started to sink in as I spoke to others about it.

Lukasz Polowczyk: So how did it feel to hear the song and to play on it?

Tobias Preisig: It took me back! Your voice took me back there. Jan showed me the first draft while we were touring Portugal, but I didn’t think about it afterwards. But when we were at the studio, I remember that you and Jan didn’t say anything. I just put on my headphones and we started recording. Your voice and what you said, it was so much like my experience. We were both there, just seeing it from different angels. And the crazy thing is that although the mood was very dark, a lightness came over me. I guess, I’m still working through this!

Lukasz Polowczyk: Same here. I didn’t intend to write this piece, it just welled up in me one day. The healing power of art, right?

Watching Tarot Card XVI Come To Life is officially out today. The full self-titled Aint About Me album produced by Jan Wagner will be released on the 22nd of November in a very unique form. Instead of having the record available on streaming platforms it takes on a movie-like format in a series of tapes and a book of illustrations and lyrics. We’ll keep you in the loop. 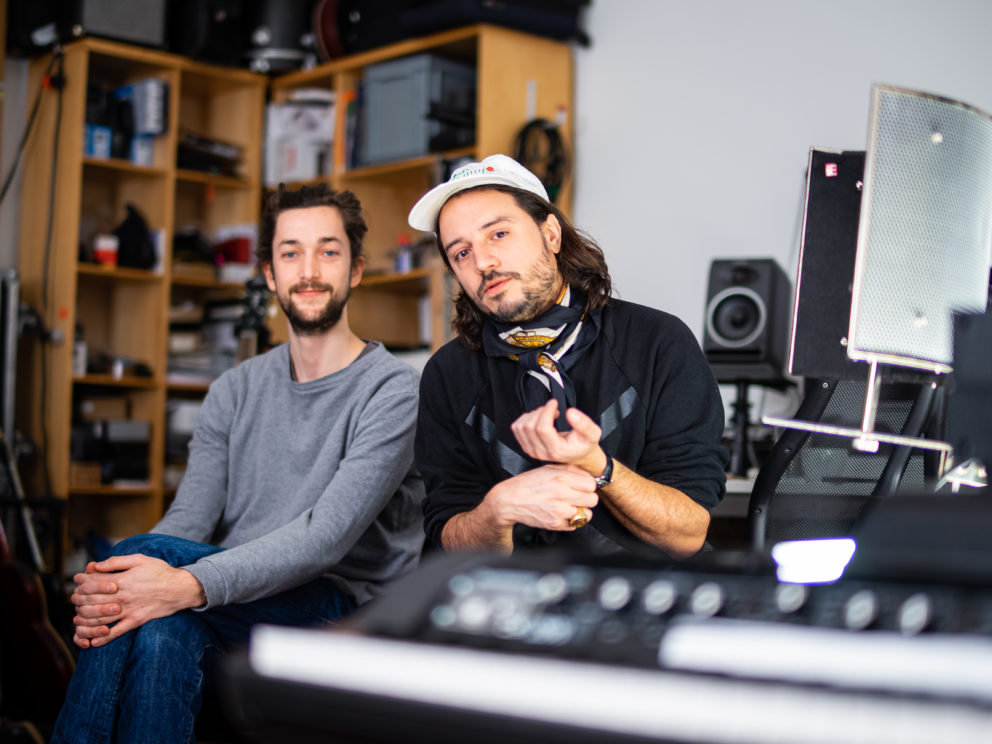 The Berlin-based musicians Jan Wagner and Tobias Preisig took their classical, ambient compositions to another level. In collaboration with the Spatial Media Lab and Zeiss Planetarium, they created a three-dimensional space for music in a very special first edition of SPHEREA. Our editor Liv attended the event and talked with the artists and we're also exclusively debuting a brand new piece from Mr. Wagner.

Rosa Anschütz and NBHAP author Liv were scheduled for a Late Night talk in Berlin but the recent spike in Covid cases forced us to change plans. So last week, they found ourselves in front of another Zoom call – Rosa at her home base in Vienna, and Liv in Berlin. The Berlin-born artist moved to Austria where she is studying Transmedia Design at the local university while pursuing her own musical aspirations. 'Votive' is the artist’s debut LP.