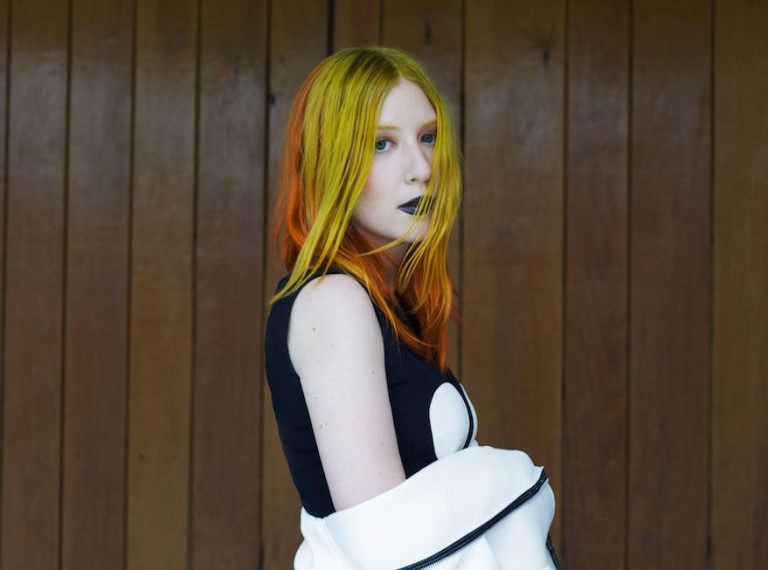 Canadian singer Katie Stelmanis and her wave pop ensemble AUSTRA just reported back with a new studio album. The highly recommendable Future Politics follows 2013’s Olympia and was released via Domino Records. You can pre-order it here. And according to Setlmanis it’s not just their most ambitious release so far but also a call for radical hope in a dark age, ‘a commitment to replace the approaching dystopia’ as she calls it.

In a press release she furthermore details the aspect of hope on the new LP:

‘Not just hope in the future, but the idea that everyone is required to help write it, and the boundaries of what it can look like are both fascinating and endless. It’s not about ‘being political,’ it’s about reaching beyond boundaries, in every single field.’

The new AUSTRA record is not just inspired by contemporary political and societal aspects but also by Stemanis moving to Mexico City last year where she also completed the work on Future Politics.

‘It was an invigorating, and creatively liberating time—I was entirely immersed in the culture, and in the magic realism of Mexico’s rich and violent history. Economic disparity is a huge topic of conversation every day in Mexico, as is colonialism and neoliberalism, and how NAFTA fucked over Latin America. Reading about this history and contrasting it with the white capitalist theory I had learned in school made the issues I was reading about in Montreal feel more global, and feel bigger’

Three videos have been released so far and also a grooving remix for Utopia by Jana Hunter of LOWER DENS. Read NOTHING BUT HOPE AND PASSION‘s 2013 interview with the band right here as well and watch the clips below.

‘I Love You More Than You Love Yourself ‘

Featuring former US astronaut Lisa Nowak and directed by M Blash. Katie Stelmanis on the clip

‘M and I were both fascinated by the story of Lisa Nowak but wanted to explore it through a lens of compassion. We wanted to use it to explore issues of mental health and depression, things so many of us experience, in the hope of further de-stigmatizing such conversations. We’ve decided to focus the actions leading up to her final arrest, and have tried to convey what it may have been like to be her, and what she was feeling. The final chapter of her story is much less interesting to us than that.’

‘Future Politics’ is the breaking down of paradigms. In this video, we wanted to explore what a world might look like if our values were transformed: instead of glorifying labour, maybe we could learn to glorify the act of doing absolutely nothing.