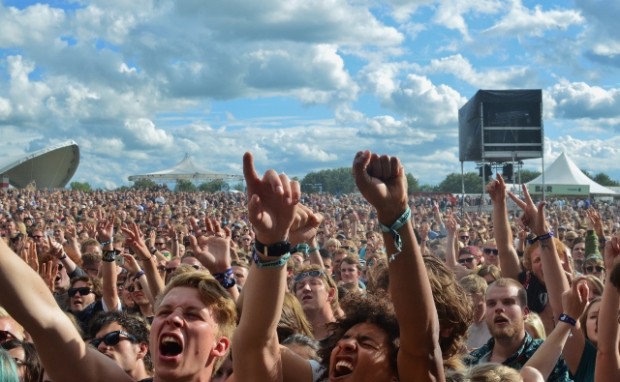 NOTHING BUT HOPE AND PASSION is reporting live from the NORTHSIDE FESTIVAL 2014, one of the biggest Danish festivals on the peninsula of Jutland. Not comparable to Roskilde, however, the line-up turns always with big international artists and bands, but are they really the big thing at the festival? Friday’s performances, gave a clear idea on how semi-famous Danish bands are kicking it more than established ones, with few exceptions.

One of their most known songs is called Above and they can indeed prove they are there. Above the rest. The last time I’ve seen these guys was in 2011, when they were still not known to most of the people. They played live in a street festival downtown Aarhus. Four years later, I see them on the stage with strong confidence and precise presence and the same spirit from four years ago. A sincere wild (reptile) feeling moves the bodies of the five members, that purely enjoy their stage time. Recklessly in the Green Stage, despite hangover, the guitarist performs sitting down. To deliver their audience the best performance possible, aside fun time, they play a mix of dancy beats like Speeddance and slower paced songs like JJ. Lead singer Mads Damsgaard Kristiansen cannot refrain to stage dive, jumping in the crowd few times, arriving almost half way from the stage to the end of the crowd. Probably the performance of the day.

To slow down the pace, QUADRON‘s performance at 8 pm sounded like the best idea ever. The electro-soul band sets a cozy and intimate atmosphere. Coco, the lead singer, shows her powerful vocals and eventually got really sentimental and emotional singing Pressure aside the hits Hey Love and Favourite Star.

One of the names most people was looking forwards turned out to be rather boring and un-exciting. FRANZ FERDINAND, on the big Blue Stage, played their most known hits of the last ten years, but failed to get out the comfort zone and gave the audience what they wanted. 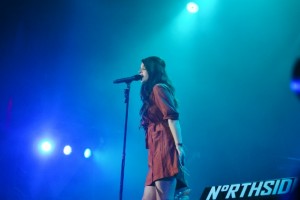 LANA DEL REY didn’t even set one foot on the stage when she already played the role of big diva aka primadonna. Whom she is, after all. The only artist requiring some specific photographic restriction at the end did not get completely satisfied and all photographers were allowed to enter the front zone – she only wanted 10. Fans waiting all day in the front line were contented as she went to met them and eventually kissed (on the mouth), after she performed her first song Pepsi Cola. She seemed purely surprised by her fans,  genuinely smiling at them many times throughout her performance. However, it was not enough for the rest of the audience. She tried to set a show, rampaging her guitar player and lightning up a cigarette, but this side-effects did not change the way she performed. Having really low expectation she sang ok, which might say it all. Still not mastering her old songs, she keeps shifting and swinging tonalities creating a rather confusing an un-linear performance throughout songs. She did not presented much from the new album Ultraviolence, ending with National Anthem.

Matt Berninger entered the Blue Stage with a full glass of white wine and poured his heart out. As always. He literally was in his own songs, as if  they were being created just by that moment. He was moved by them, they seemed heavy on him, and said no word to audience, that anyway was enjoying his vision. THE NATIONAL‘s setlist was populated mainly by songs of the last three album, with the addition of fewer more musical instrument they are not using in the original version, as a sign they are preparing for a slow paced tour in the summer – especially in Italy. They ended their show with Terrible Love after an hour long concert where they mastered I Should Live In Salt, Bloodbuzz Ohio, I Need my Girl and England. 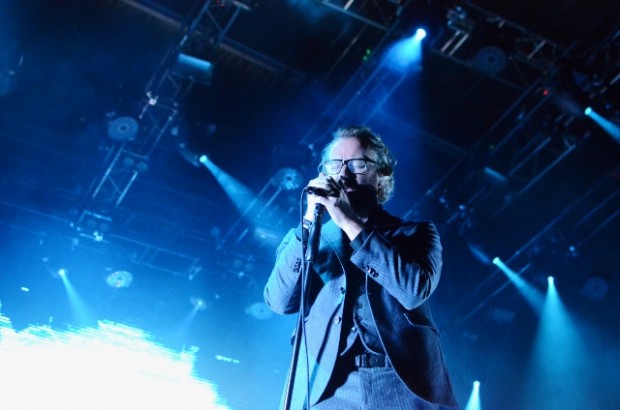 The last album left most of the fans a bit disappointed as it was not as danceable and electronic as the previous ones. With Dreams they tried to go back to the roots focusing on the technics of sounds and lyrics, making it a very intelligent album. They’ve been able to cleverly mix the different moods portrayed in their albums (the last one, quite gloomy, the previous wild and catchy) giving a great performance. Eventually, they closed with their famous cover of Satisfaction together with Mads from REPTILE YOUTH.