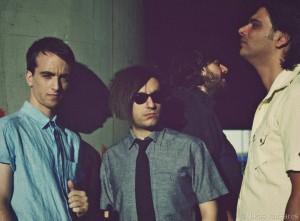 WONKY DOLL AND THE ECHO might not be that known so far but their music is worth it to cast en eye over this indie quartet. The band formed in mid-2010 in – watch out – Athens and consists of George Lemmons (lead vocals, guitars), YIOS (Bass, backing vocals), Kostas Antonakoglou (synth, piano, guitars) and John Boulis (drums).

Their instrumental spectrum enables WONKY DOLL AND THE ECHO to play a varied mixture of rock, post-punk & shoegaze resembling bands like DEPECHE MODE, WHITE LIES or THE NATIONAL.

Their first LP Pleasant Thoughts was released in September 2012 by the local Greek indie label Geheimnis Records. One year ago the band successfully financed a video and a short movie for their song The Cut via crowdfunding.

At this time it’s always nice to hear some good news from Greece even if the music and the lyrics of WONKY DOLL AND THE ECHO are rather black. All you see is disharmony / fixed distorted symmetry.

With the clip for Strange Land WONKY DOLL AND THE ECHO present us a pretty cloudy yet atmospheric video. Watch the premiere on NOTHING BUT HOPE AND PASSION below.

WONKY DOLL AND THE ECHO