Interview: Future Islands – ‘To have fresh blood in your veins’ 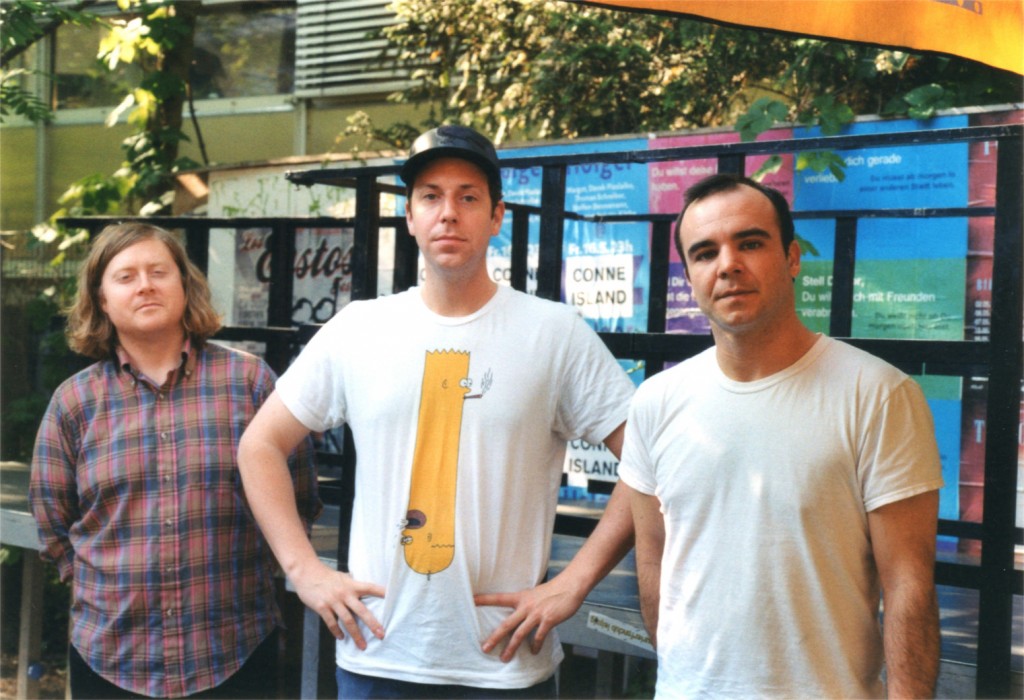 William Cashion, Gerrit Welmers and Samuel T. Herring in Leipzig, May 2014.
Photo by AORTA LOVES YOU.

NOTHING BUT HOPE AND PASSION sat down with Baltimore-based synthpop band FUTURE ISLANDS Islands to talk about their current line up, the recording of their latest LP Singles and of course that performance at David Letterman’s which made them finally known to wider audience. On a sunny afternoon we catches them right away from the soundcheck for their nearly sold out show at Leipzig’s Conne Island.

Firstly and of course, please allow me to ask you about that famous Letterman Performance. It looks like this Late Night Show culture is really kind of a USA thing, I just don’t know any similar thing here in Germany that brings entertainment and especially good music in such an combination. How special was that to you?
Samuel Herring: Oh yes, that was really special. I grew up like watching David Letterman as a kid, when I was like 12 or 13 I was probably pretty obsessed with it. I mean, I haven’t watched it in forever, but you know, Conan O’Brion and David Letterman, I always watched this shows and waiting for the comedians or the musicians. I think it’s just an honor for us. In a certain level it was a great opportunity to us.

How does this work? Somebody calls you and ask ‘Hey, You like to play at Letterman’s tonight?’
William Cashion: Yeah, it’s like each Late Night Show has it’s booker, and they liked our music, so they decided to give us a chance; that was cool.

It looks like music media explodes since then. If I had googled FUTURE ISLANDS some years ago, of course I would had found something, but now the first ten search results are media like Pitchfork, the Guardian or the Independent that cites this legendary Letterman Performance. Do you recognize this already?
SH: Oh it’s great to get coverage, needless to say. You do find sometimes, when there’s a wealth of articles, they are all kind of say the same thing and then it’s like you wanna see somebody push it, or somebody doing something else but there are some really exciting things happening too. Any exposure like… we had this guy, Andy McCluskey from OMD who reviewed our album and we were blown away. That made us feel really good.
Still, as you know, not any press is positive but I think in a way it is actively positive. Like they say, any publicity is good publicity. That’s one of those things, it’s nice, but it’s not what we are in it for. We just want people to know about what we do, so that’s good. But also we are kind of a band that’s like ‘don’t believe the hype’. Means don’t read this, and then come, expecting this, based on this. Just come to a show, have an open mind about it. Because you don’t wanna be followed by sheep, we want people who are active listeners, engaged in what you do and not just there because of something they read.

When I saw that TV performance, I just thought, wow, that’s simply FUTURE ISLANDS, that’s how it looks, and feel, when they play live. But perfectly filmed in HD and televised on national TV. Compared to your music videos – which are mostly that kind of well filmed short films – it was something quite new to bring it down on such a powerful performance. What’s the reason for this?
WC: We did it a few times, earlier on in 2007, 2008 or so, and we are definitely not totally against it. It’s up to the director and whatever they feeling.
SH: I don’t know. We kind of think it’s a bit goofy. We think we are little goofy in our music videos. (laughs) I think the idea of the band that’s just like playing and the stage is exploding and other things cut in, is just that corny music video style. We really love if somebody create something from the vision that they get. It’s like ‘what do you see, when your hear that song’ or ‘how do you translate that words’. We got one friend in particular who we work with, our buddy Jay Buim; he has done four videos for us and we kind of just trust him. We are trying to give this trust to the people we work with for our music videos, because it’s a different kind of art. It’s a different kind of expression, if we like what this person does and if we trust them to their magic, that means to trust them with our art to do what they do. I guess the last video we were featured was the Give Us The Wind video and we were in Grease too, but that was more like documentary style. I think that’s a good one we were in, that’s really worth to check out.

If one looks at your new album ‘Singles’, then you can’t ignore that you changed your sound slightly. Although it’s unmistakeable still a typical FUTURE ISLANDS record with everything the fans like and always liked. Could you tell us a bit about the way to your new album?
Gerrit Welmers: It’s just happened.
WC: We always had this slow burners and the more danceable ones. We didn’t say that we only want only write these kind of dance songs for the album but wanted every song to be really strong for this new record and we wrote more songs then we eventually were using on the record. This was the first time we did that. Before, in like every other album it was like those were the songs we had written up to this point. But this time we had leftover songs, like extra songs that didn’t get used.

WC: Oh yeah, or maybe future A-Sides. But we tried to pick up, what we think is the best of the best. We always trying to expand the instrumentation with every album too, so this is our first time we used horns on an album. We wanted the live drums to play more the role on this record. There are live drums on every album that we’ve done, but on An Evening Air and On the Water they were mixed really low, so they blend in with the digital drums. This time we allowed the drums to sound more organic and to have more presence in the songs. But as you said it’s just a FUTURE ISLANDS record. It’s still us.

SH: I think the thing that changes the album is just the sound or the fidelity of it, but also the sounds we are using. You know, if you go back and compare the synth sounds of our first album to this album, it’s very different. I’d say Gerrit is using more organic and round forms instead of sharp and staving sounds like the old school happier sounding FUTURE ISLANDS or even the darker FUTURE ISLANDS. Which I think is exhibiting in songs like Like The Moon, Light House and Fall From Grace. Those are unmistakeable FUTURE ISLANDS, that maybe would be linked in On The Water while the spirit is to me an In Evening Air vibe song. I don’t really think, any of us has done something different. We are just writing from where we are right now.

How has work changed since the new drummer joined you. And how does it feel two have a new face between old friends finally?
WC: O on the album, the songs weren’t written with a drummer. So it was sort of like he came in the studio and then we tried different things out. Like he just go in and we said ‘Try this, try that.’ But doing it live has definitely opened up the sound, it gives a new power to the show, it gives a human touch to the electronic drums, which I think is a positive thing. He can give little accents, or accent what Sam is doing or I am doing.
SH: And that’s more power for the stage. Like a direct changeable beat or an extra beat. Well, the snare hit really helps me a lot. And it’s also cool and interesting to having an extra person in the group, or let’s say it’s always good to have fresh blood in your veins.

Question to Sam. I saw one of your Hemlock Ernst performances, can we expect something more of that really good stuff in the future, maybe recorded?
SH: Um, yeah, I do something. But don’t look out for it. I’m not trying to push any of that, it’s just something I do because I love it.

Oh yes, you said Hip Hop music was your first love.
SH: Yeah, Hip Hop in the and this girl Selina. That were my first loves, al discovered around the same time. (laughs)

What else inspired the sound of the band?
SH: I think we were inspired by natural world, but also by relationships. And that’s not like love relationships but just friendships and things like that. We are inspired by our friends. And definitely the places we’ve been, what we’ve seen and also the experience of being far away. Not only in the writing, but in the certain sounds that these guys are creating. Cause they are the emotional ones in the group, who create such passion.

You said passion, I’ll take this as the keyword for my last question. What means hope and passion to you?
GW: Just what we do.
SH: Oh shit, that’s just what gets me through every day. For me, that’s what it gets me through every day; the hope that everything is gonna be ok and passion that push me forward into it.
WC: I guess you can take that question in so many different ways. I think anyone who’s willing to loose their job and loose their home for the art, any freaks out there, traveling the world or trying to get their shit out there…  it just takes a lot of hope and passion to do that.