Pagans in Berlin: Insights into the Metric Universe 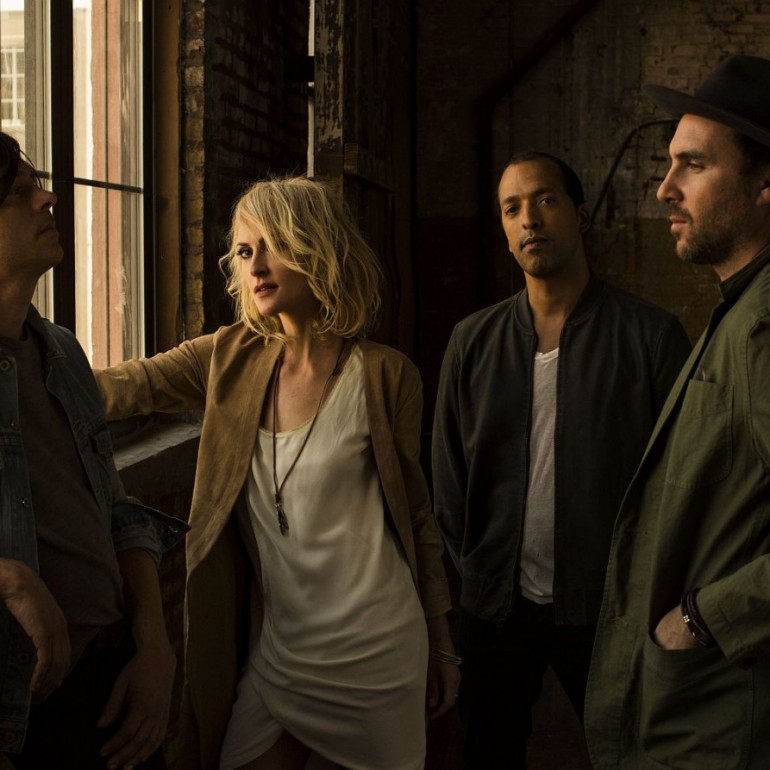 What do you think when you hear the word pagan? Strange cults, nature worship, hedonism or simply not Christian? The word defies classification just as the band METRIC. Mixing synth-driven retro pop with up-to-date indie rock, Emily Haines, James ‘Jimmy’ Shaw, Joshua Winstead and Joules Scott-Key constantly add new shiny and powerful sounds to their musical spectrum. Pagans in Vegas is the title of their sixth album and it’s the perfect essence of all the associations that rush through the mind while listening to their electronic hymns of hedonism and eighties enthusiasm with super modern hooks and a slight hint of bitterness.

Before METRIC played their show in Huxleys Neue Welt, Berlin, NOTHING BUT HOPE AND PASSION had a chat with producer, guitarist and sound wizard James Shaw.

The first thing I would like to know is: Who came up with that great title?
James Shaw: That was Emily. Usually the title comes early on but this time it came right in very end. The record had been mastered for months and we didn’t have a name. Then Emily texted me when she was at the airport, I think in Vienna, and said ‘I think I have the title’. The minute I saw it, I went into the studio, listened to the whole record and it gave the whole thing a context. Usually it feels like the record explains the title but now it feels like it’s the title that explains the record.

Can you tell me a little more about that?
JS: Emily keeps saying she feels like bigfoot in a slot machine We feel like we’re strange, spiritual persons in a place where there’s very little spirituality going on. Vegas is like the symbol of a place with no soul. Only economics and luck and chance and sin. And it feels like that’s the world we live in. We don’t feel comfortable in that place. But while making this record we felt okay with the idea of showing up at the ‘casino’ and just role the dice and see what happens.

You’ve said that you wanted to capture the romance of another time with that album. Why the romance of the past? Does this century lack romance?
JS: We grew up with the music of THE CURE, DEPECHE MODE, NEW ORDER. And this is an important reference for us. I remember feeling different about music than I do now. It just felt like it was a reference that wanted to be shown, so we kind of honoured it.

And one could definitely hear those references, when METRIC presented their new songs in front of the Berlin audience. They started the show with Lie Lie Lie, which is also the opening track of Pagans in Vegas and a cool kick in the ass of the media and the entertainment industry that try to push women into more than questionable roles.

‘Emily rarely talks about being a woman in music’, James told us.

‘I think that her point about not talking about it is, that the more you talk about it, the more it draws attention to the fact that you’re not a man, which creates the separation and fuels the same shit. She had a point at the end of Fantasies and Synthetica where she had seen who was gonna let her into places and who was not gonna let her into places because of who she is or what she says. I think she was pissed off and needed to express the fact that the only way in to a certain world is to be docile and to not be active and to not say anything out loud.’

Strutting across the stage with ‘wings’ of black feathers and LED lamps, Emily Haines looked like a dangerous peacock, bursting with confidence. ‘Got to be sedated to be seen on the cover of your magazine’- obviously this does not apply to Haines. Her energy seemed to increase throughout the show which could definitely be taken for a pagan celebration of a once-in-a-lifetime night (as she put it), somewhere between futuristic space music like Cascades and Other Side and the headbanging ‘Oh yeah, woo-hoo’ of Too Bad, So Sad. The enthusiastic audience could already sing along to the new songs and celebrated them as much as the old hits like Help I’m Alive and Monster Hospital. 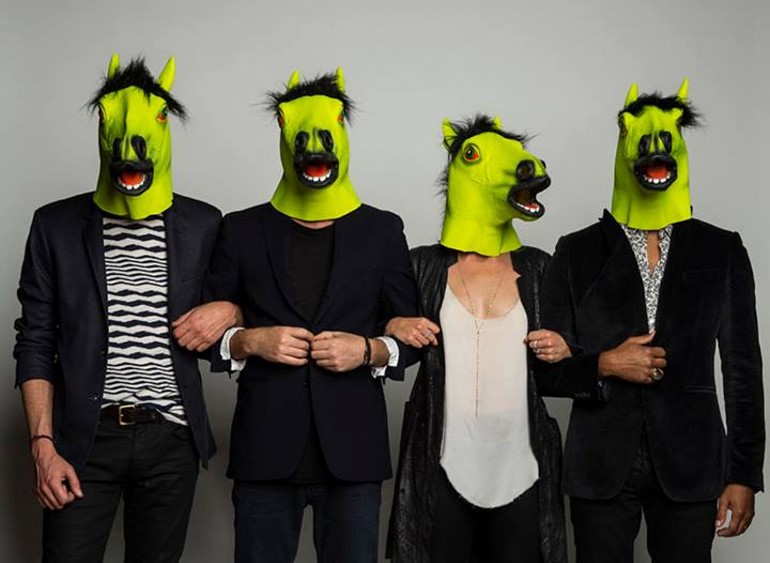 When it comes to connecting with their fans or keep them updated, METRIC seem to really give in to modernity by creating apps. We asked James Shaw if it’s necessary for musicians to use modern technology to entertain their fans and to offer them something in addition to records and concerts.

Here’s what he said: ‘I think so. In 1977 you just made a vinyl record and that was it. There was no other way to be entertained. But now people are looking for a new thing every 32 seconds. The idea for us behind the Pagan Portal, which is the latest version of our app, was not necessarily to be entertained, but staying connected with the band outside of the noise of the rest of internet. I don’t want to force you to go to YouTube or Vimeo or Spotify just in order to hear a new song of ours. There’s a lot of information and advertising on those pages that end up going into your brain. I don’t need to see that next to what I’m trying to tell you. And of course you can hear the music first if you connect with us through the Portal.’

Let’s come from technology to politics. After almost ten years of the conservative government of Stephen Harper, Canada has a new, liberal prime minister: Justin Trudeau. You live in Canada for a long time. Have you followed the election campaign?
JS: Oh, very much. Canada has felt misrepresented for a little while now. Harper wasn’t exactly the best ambassador for a country like Canada. Without getting overly political about my personal views, I feel like it’s a very, very welcome change and the country is very excited. The political system in Canada is very confusing and convoluted and Trudeau says he’s gonna change it. Another thing he’s announced is that Canada withdraws all fighter jets from Iraq and Syria. That’s fantastic, let’s just start doing stuff. It’s been too long of things just going too slow. I don’t understand why the internet can move with the speed of light and the government has the speed of a tractor.

In his victory speech Trudeau said ‘We beat fear with hope, we beat cynicism with hard work’. Is it that simple to change things with hope and passionate work?
JS: Not really. Everyone has hope. Hope’s fucking easy. You can lie on the floor and have hope. We have to stand up. Standing up takes fucking work. And a lot of politicians just talk and talk and talk. The best ones are the ones that just do. We will see how Trudeau does.

Can music change things?
JS: I’ve been noticing this strange thing: In America there is a direct correlation between the government and music. When there is a republican president, there is really great music happening. And all of a sudden there’s a democratic president and the music kind of goes to shit. With Reagan and George Bush senior in the eighties there was a lot of good music. Then Clinton came in and the nineties ended with the BACKSTREET BOYS… George W. Bush came in 2000 and music flourished – THE STROKES, THE WHITE STRIPES, the list goes on and on. Why is that the case? Maybe it’s because artists feel like they need something to rebel against. A lot of good music has come out of Canada since 2005 with a shitty prime minister. Who knows, maybe music is about to go to shit now [laughs].

Fortunately there are no indications that ARCADE FIRE, FEIST, FUCKED UP, BROKEN SOCIAL SCENE and all the other great Canadian exports plan to retire and looking at the vivid and innovative music scenes in cities like Toronto and Montreal, we are optimistic as far as Canada’s musical future is concerned. Besides METRIC will release another album in 2016, ‘more organic than anything we’ve done before’, as James Shaw revealed. Just enough time for us to broaden our pagan horizon and bask in the afterglow of a great night with METRIC that left our hearts beating like hammers.