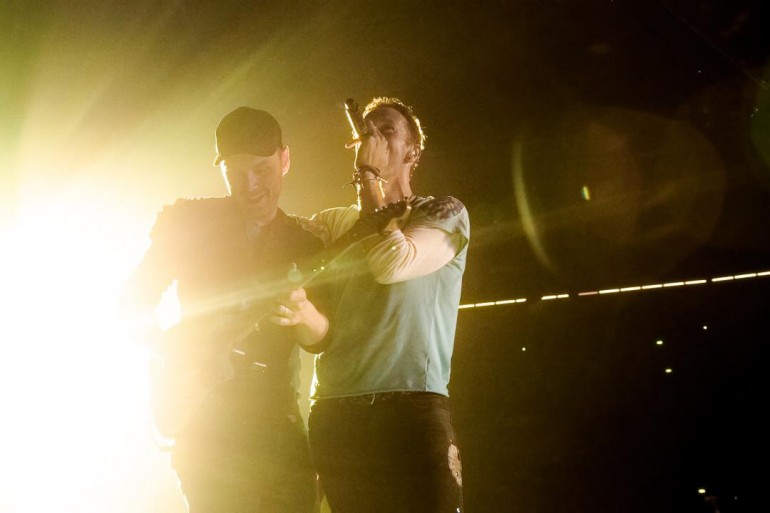 Oh god, it’s another COLDPLAY article. No, please don’t run away. We make that quick and although bashing the band has become a crucial element of contemporary music journalism we don’t want to be that harsh with Chris Martin and his gang. Yes, the world’s most successful band is a polemical affair and you rather love it or hate it. The band itself, riding on an unstoppable wave of self-affirmation via their fans, record sales and sold-out stadiums, stopped giving fucks a few years ago. That itself deserves at least a bit credit. The rest, well, might speak for itself.

NOTHING BUT HOPE AND PASSION attended COLDPLAY‘s A Head Full Of Dreams show at Berlin’s Olympic Stadium which had everything you’ve come to expect: lights, confetti, balloons, fireworks and way too many colours. And while the band had its creative peak already years ago it’s pretty sure that you can say the same about their live show now as well. Here are 7 conclusions from that entertaining summer night in German’s capital.

Due to a slightly confusing entrance we missed the first support act of the night, ALESSIA CARA, almost entirely but since that was pretty boring and generic Top 40 pop we really don’t mind. LIANNE LA HAVAS was second in terms of support duties and she truly didn’t disappoint. In fact, she was pretty awesome, lovely and had one hell of a great voice, paired with soulful alternative pop tunes. It was more of a profound performance instead of the carnival that followed after her. I mean, she even worked with PRINCE on his last albums! Her latest LP Blood is out now and you should not miss it.

One thing you have to make sure right from the start is that you don’t ask too many questions. How much does this madness cost? Is it all necessary? Is everything staged (even the ‘mistakes’ during the acoustic set)? Is bassist Guy Berryman still enjoying this? And why do they even bother playing their instruments during the Tiesto Remix part of Paradise? There is one and only one credo to a COLDPLAY show: have a good time, celebrate life and the good aspects even if the world around you is falling apart. You can’t acknowledge that consequence enough. Once you push a giant flying balloon away you really stop wondering or shaking your head.

Conclusion 3: It’s all about the fans

The show starts with a journey all across the world with fans from all over the globe greeting the audience in their native language. In the end there’s two German girls who recorded a short video message to open the show. All the way during the show the giant video screens show the audience, laughing, crying and celebrating. In the end a little girl even had the chance to wish for In My Place to be included in the set via Instagram. The world’s biggest band realized that they don’t hold the rights to their music anymore. It belongs to the people; even if it means that you have to play the EDM-infected fan favourites instead of the really good ones. Gosh, these guys are way too polite.

Conclusion 4: The band acknowledges its past, the audience… well, not that much

Okay, you can’t really destroy Yellow, even after 16 years but it was really nice seeing The Scientist making a return so early in the set. True old school fans were pleased with the short semi-acoustic set at the second stage which the band started with Don’t Panic, the opener of their 2000 debut Parachutes. Later on, even ‘Til Kingdom Come (a hidden track from 2005’s X&Y) found its way into the set which saw COLDPLAY finally embracing their hardcore fans again but ironically also marked the low point for the majority of the audience. It was a reduced performance without gimmicks, pretty ‘early days’ style. It’s just not working anymore, at least not in a stadium setting and even the ‘ultras’ have to accept that.

People rather knowing the words to the @rihanna collabo instead of ‘Don’t Panic’ really makes me angry. #ColdplayBerlin #ahfodtour

Yes, it’s decadent and an expensive gimmick, but the idea with that glowing Xylobands is still pretty awesome. It doesn’t have the same ‘a-ha’-effect as on the band’s last stadium tour four years ago but especially during tracks like Fix You (where the bands replaced the good-old lighters) and Charlie Brown (where it’s just a colourful overdose) the effect is just too fascinating.

Conclusion 6: They really can’t decide whether they want to be bubblegum or U2

While we really appreciate the fact that Chris Martin dedicated a track to the victims of the Istanbul airport bombings a day earlier and there was also a short film where the late Muhammad Ali talks about the importance of peace, especially between religions. But, well, than two songs later we’re back to the bubblegum confetti party. It’s a contradiction but also a tough part COLDPLAY are playing. They want to raise awareness but also work as an entertaining form of escapism. Unlike Bono who does his predictable monologues about world piece, Chris Martin is a bit tongue tied when it comes to these things. The audience appreciates the walk on the tightrope and maybe it’s the best what you can do in this situation. It’s pretty much impossible to do this in such a setting without sounding at least a bit pretentious.

Conclusion 7: All due respect, but can they please stop now?

We already pointed out that the band reached a musical dead end with last year’s A Head Full Of Dreams and you have to admit the same regarding the live show. It’s just a copy of 2012’s Mylo Xyloto tour, maybe with a bit more fireworks and stuff but the rest remains the same. They can’t go bigger, the glowing wristbands are nice for a second time around but what follows all this madness? The world’s last remaining big group (it seems) can’t get any bigger and the only way COLDPLAY could make sense in any form in the future might be by actually not getting bigger. They should break the existing formula, tear down everything and be brave enough to think outside the comfort zone. I mean, we got four multi-millionaires in their late 30s here. This can’t be it. And if they stop now or refuse to change than they are indeed not better than the critics say.