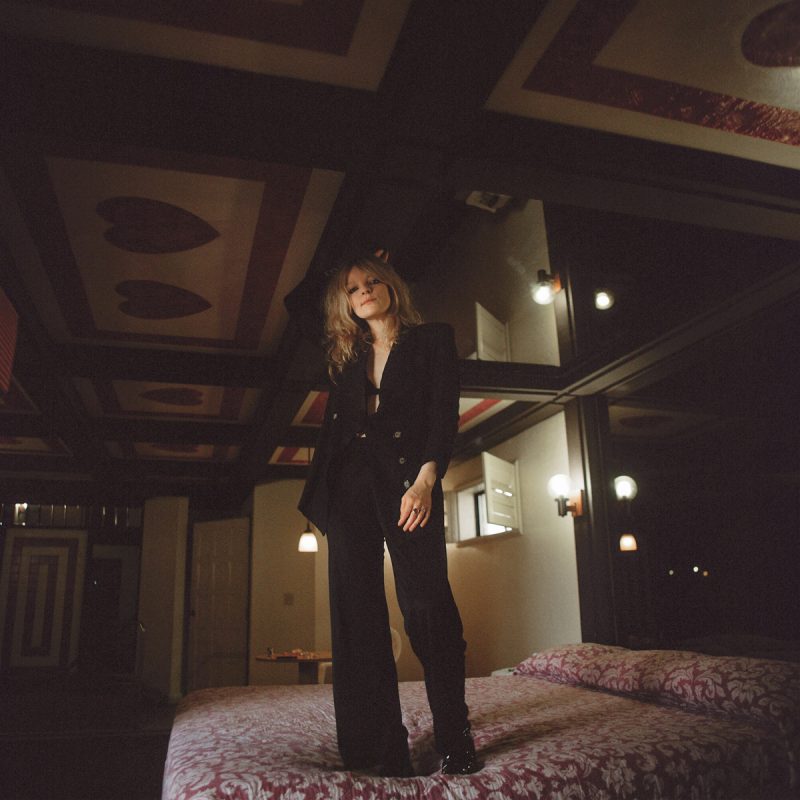 With her third LP, Jessica Pratt is not only going through the transition of moving to a new record label (from White Fence’s Drag City to Mexican Summer), but she also transported the intimacy of her home productions to a professional studio. In contrast to her predecessor On Your Own Love Again from 2015 Pratt renounces intertwining guitar melodies and puts a much more reduced, but still tender guitar strumming in the center of Quiet Sings. But the stripped down arrangements are neither lacking of playfulness in chord progression nor in her vocal performance. In This Time Around Pratt is performing with an effortlessness that can be compared to instant Brazilian classics like Domingo of Caetano Veloso and Gal Costa. Significant for the singer’s sound is the creation of an intimacy, that seemingly can only be found in the private environment of bedroom-productions. On Quiet Signs the intimacy is now transported from her apartment to a professional studio. One could assume the privacy of her music would become lost in the countless possibilities of studio production.

However, on Quiet Signs Jessica Pratt creates a kind of intimacy, that arises, when the listener had secretly slipped into an empty concert hall to catch a glimpse of the enchanting and beguiling singer. Her strength is to microscopically magnify the small details that are hidden from a noisy world and make it hearable for us, although the calmness and quietness of her songs require a very attentive listening. The accompanying string-keys, flutes, pianos and partly percussions (Aeroplane) elevate her voice in such a delicate way, that her music comprises more of evanescent moments than actual songs. In seven years of writing Jessica Pratt crystallized the essentiality of her previous work, culminating into her most direct work of lightness and loneliness to date. (Viet Phuong Vu) 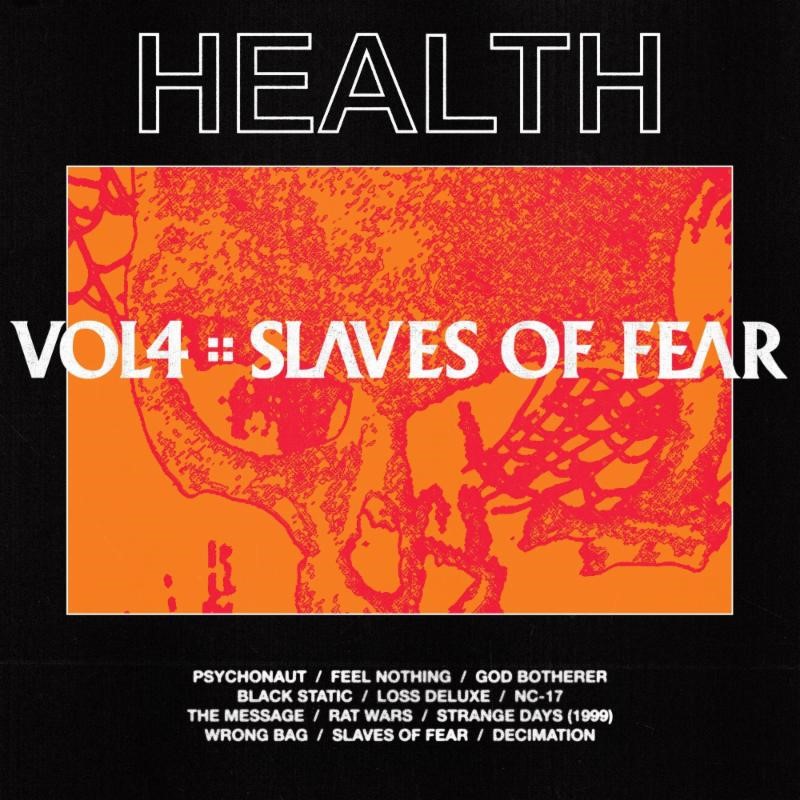 These days the feeling that the world’s about to lose its mind is omnipresent. The media, the politics, the people, and the art – everything’s heading towards a dead end. It’s up to us humans how we react towards all that. Whether you head for acceptance, escapism or resistance is up to you but HEALTH have made up their mind. They decided to soundtrack the inevitable in the bleakest and most disturbing colours. And while its predecessor Death Magic was already dealing with bleak topics like humanity’s corruption the follow up sounds even more desperate and determined. And that’s probably one reason why everything’s written in capital letters. VOL. 4: SLAVES OF FEAR is a frantic encounter with the world’s end, the soundtrack to the apocalypse and a new level of intensity for this band that’s been constantly pushing itself for the past ten years. The record is a fusion of all sorts of different genres. Metal riffs team up with pumping goth techno, glitchy beats meet gentle moments of pop and most of the time it feels as if all of these different worlds are in a fight with each other. PSYCHONAUT starts with aggressive tribal-like drums before Jake Duzsik’s gentle vocals add bits of beauty to the chaos. But the peace is only temporarily as aggressive noise attacks destroy the track like an aural gunfire.

Moments like these are symptomatic for the entire record. The harder elements in HEALTH‘s sound seem to be more uncompromising than ever, the atmosphere feels like permanent tension in which the only continuing effect appears to be the element of surprise and uncertainty. ‘Let’s get numb till we don’t feel nothing’ sings Duzsik on FEEL NOTHING in his fragile voice before the metal riffs disturb him in quite an uncomfortable. The surprisingly tender closing track DECIMATION probably marks the only time the listeners can catch their breath; once the dust after all that chaos has settled. In the band’s ongoing attempt to have beauty and brutalism battle each other the latter one appears to winning this round. VOL. 4: SLAVES OF FEAR is an ugly record, one that longs for a cathartic effect via its own aggressive nature. And there’s barely any better band around these days that combines these worlds as good as these guys do. No matter if you use it as your personal doomsday score or simply as an outlet for frustration: it’s a challenging experience you should not miss. (Norman Fleischer) 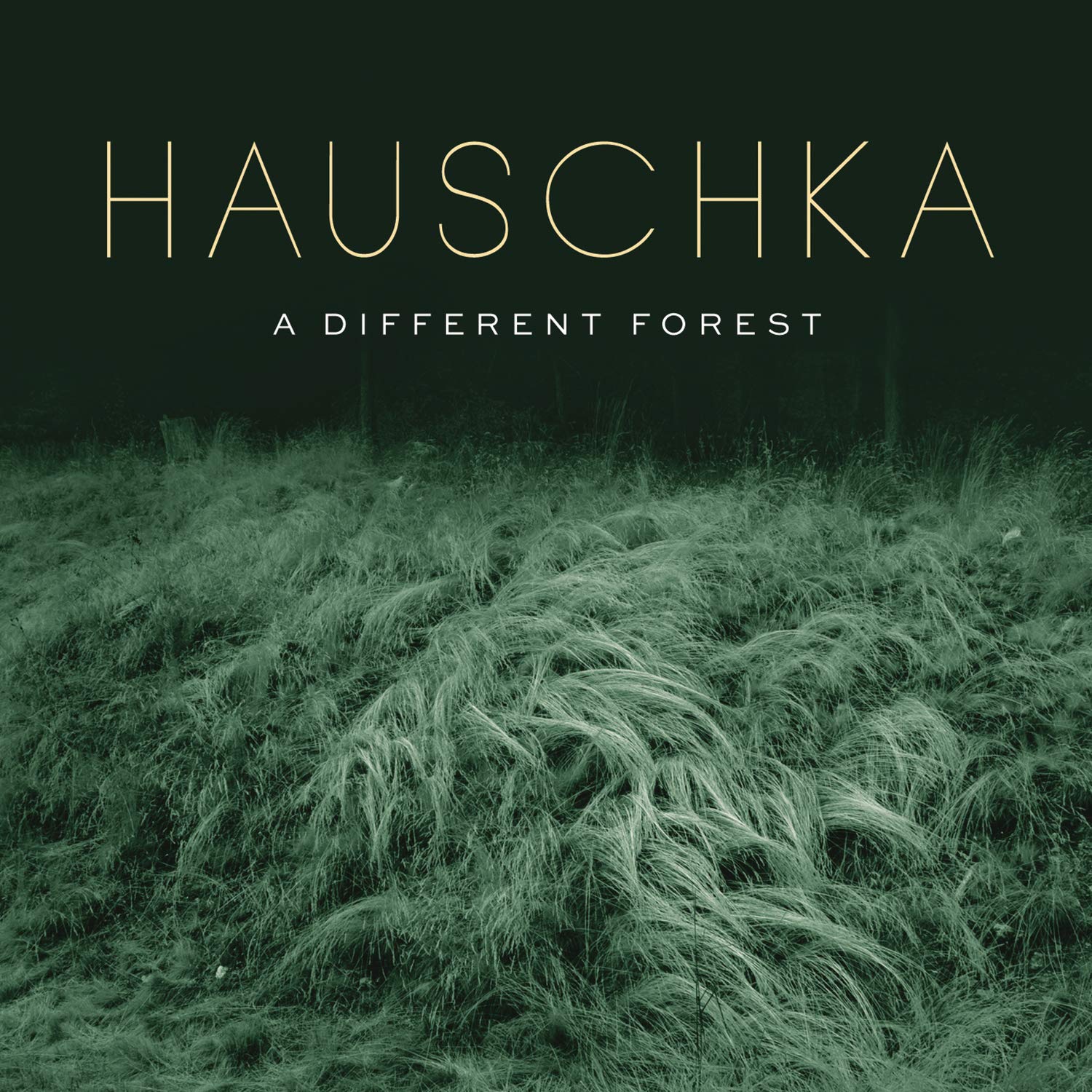 Sounds like… a beautiful hike through nature – especially the forest – transferred to the piano.

Hauschka‘s new album A Different Forest is special in many ways. It is his very first piano album that is recorded with a plain piano (without any manipulations) and there hasn’t been any script – Volker Bertelmann just sat down, pushed the record button and started to play. Emerged is a thirteen tracks long beautiful classic piano album that takes you into another world. A world where humanity appreciates the forest as a place of silence that gives strength back. Hauschka drew inspiration from Morton Feldman, a composer that just played note after note without looking back, and from his environment – especially his experiences with nature. It is the forest that is natures allegory on the album.

Bertelmanns way of making music, recording it and writing it has a lot to do with hikes through nature: he walks into the unknown, explores new territory and listens to his intuition. Sometimes he chooses routes and marks waypoints, but the in-between is uncertain. His way isn’t linear, but rather marked by curves and turnings. Taking for example Curious which turns its musical direction about after 20 seconds. Or a Daybreak over Covent Garden which starts with a restrained melody to turn into a more unsteady and dramatical musical passage. It is also the mixture of repetitions, variations and emotional melodies that make A Different Forest a very special piece of art. You can really feel how Bertelmann reflects on his and humanities relation to nature and their alterations. He takes the listener on his musical journey through woods, forests and hills. What remains is a thought-provoking impulse on how you yourself experience nature and how you relate to it. (Miriam Wallbaum) 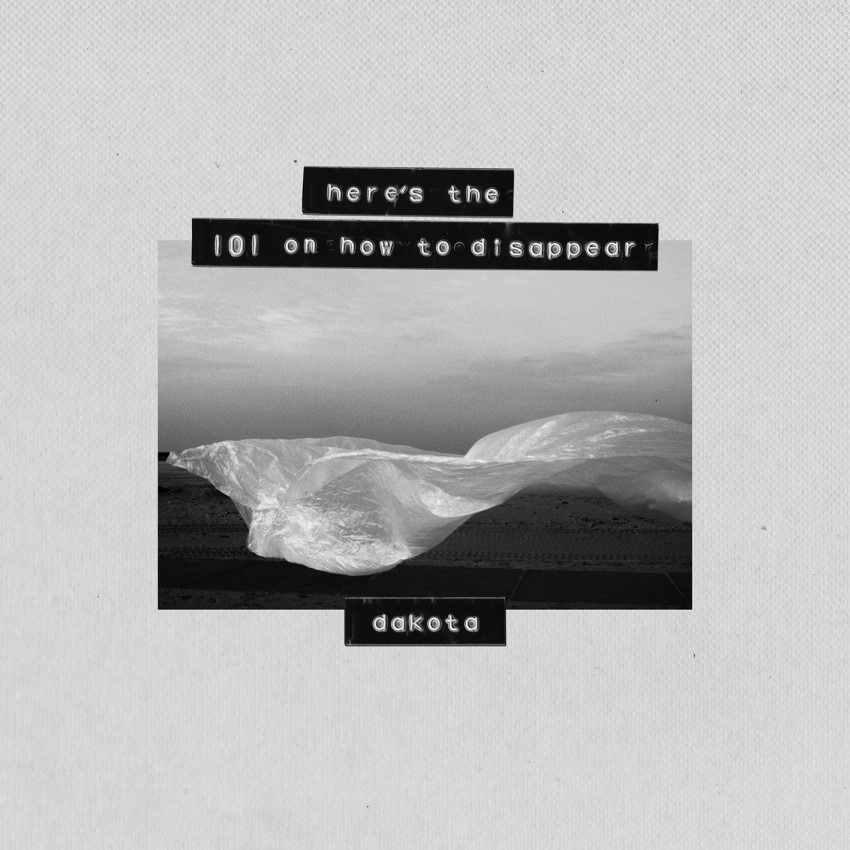 Sounds like … a much-needed breath of fresh air for contemporary indie-rock.

In this day and age, it should be no surprise to see a band of four young ladies take the stage at a festival. The fact that it is still an exceptional phenomenon tells us not only that we still have a long way to go, but how much we might have missed out on so far. Performing at last year’s c/o pop Festival, Amsterdam four-piece DAKOTA captivated us with a performance both highly energetic and completely self-assured. Their debut album Here’s The 101 On How To Disappear, out via Berlin label Sinnbus, continues in the same vein – minute after minute, DAKOTA lock into lush, bouncy indie-rock grooves ripe with catchy chants and melancholic soundscapes.

At first glance, the parallels between DAKOTA and Californian contemporaries Warpaint are striking – both are all-female four-piece guitar rock bands, both convey a sense of equality in their compositions and in their appearance onstage and many of their songs approach pop from unusal angles. But where Warpaint delve into loose, psychedelic near-improvisations, the band’s compositions are much more focused, creating depth through detailed and imaginative instrumental work. A bit like Interpol‘s Carlos Dengler, Lana Kooper’s ringing bass playing covers territory normally occupied by a rhythm guitarist, leaving plenty of space for Jasmine Van der Waals’s meandering guitar lines. On Songs like Quick Fix or Dreams, those sparkling guitar and bass lines interlock perfectly, allowing Lisa Brammer’s emotive, but always slightly melancholic delivery to shimmer through. But what really showcases their effortlessly catchy songwriting is the closing stint of Stranger Things and re-released debut single Icon. Just listen to the drum beats – guitar music hasn’t sounded this fresh in years. (Igor Franjić) 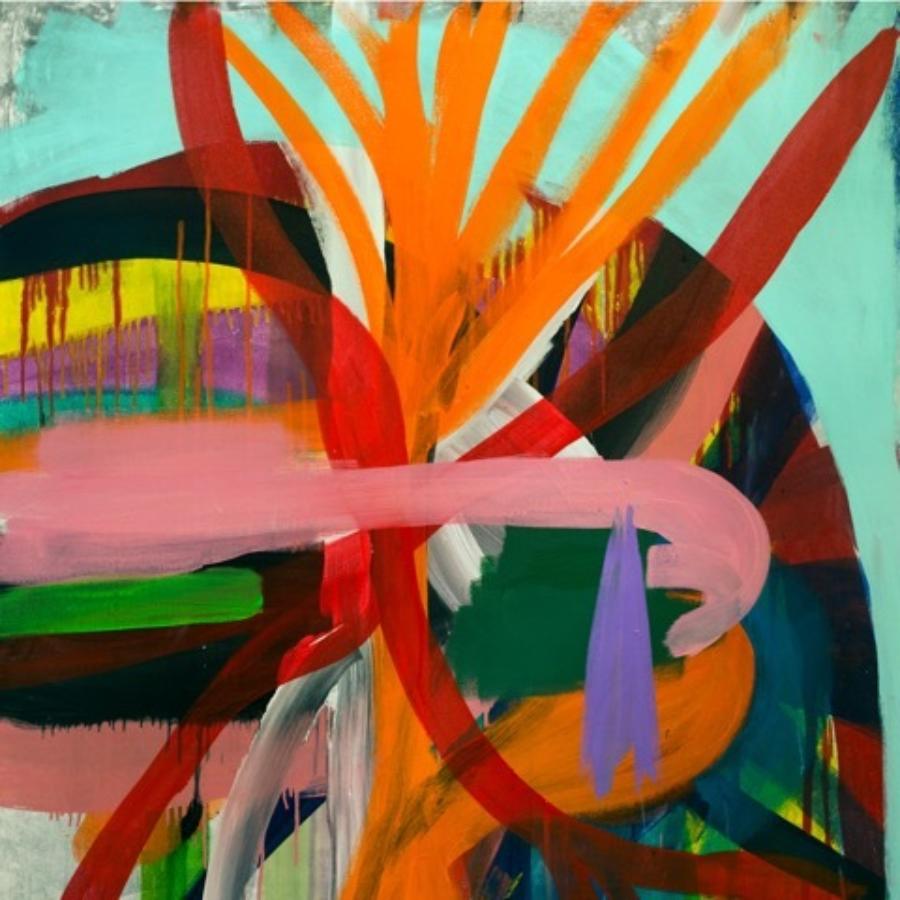 Sounds like … an existential garage rock and roll monstrosity.

In the long lasting history of rock and roll the elements self-abandonment and self-destruction have often become crucial partners that had more in common than one might think. Way too often it brought artists to the edge and the second album by British trio YAK is a record born out of this feeling. Leading man Oli Burslem was so determined in making this record happen without any consequences that it brought him on the brink of losing everything. He actually lost a lot: all his money, his apartment and partly also his hoped. He even had to sleep in his old car for a while. The follow-up to 2016’s critically acclaimed Alas Salvation was going nowhere but then enlightenment came in the form of Jason Pierce from Spiritualized (no joke) who helped the band get back on track. They managed to record 29 tracks in 10 days at London’s RAK Studios with the 11 ones on Pursuit Of Momentary Happiness being the quintessence of that whole experience. Like the path towards it the record became a rollercoaster ride of its own.

YAK‘s sophomore album is a colossal garage rock epos that feels like a culmination of British rock music from the past 50 years. You can sense a bit The Who in here, the glam rock of Bowie, the stiff-upper-lip vibe of The Stone Roses and Oasis but also the love for melodies of bands like Arctic Monkeys. And of course, there’s a bit Spiritualized in here as well. Bellyache is a frantic opener that already sets he bar high. YAK show more variety than on their debut, allow themselves Spaghetti Western sounds (the title-track) right next to jazzy glam rock vibes (Words Fail Me). Burslem delivers these songs with the existential urgency they were born out of and he’s best at it when it comes to such epic garage rock tunes like White Male Carnivore or the magnificent Pay Off Vs. The Struggle which comes with an all-crazy and wicked finale that just leaves you with a giant ‘WTF’. Same goes for the tender and slightly psychedelic closing track This House Has No Living Room. This record wants everything and delivers (almost) everything. It’s life, love, lust and all the ugly things in-between. It’s time to ultimately free these guys from the ‘best kept secret’ stigma once and for all. (Norman Fleischer)