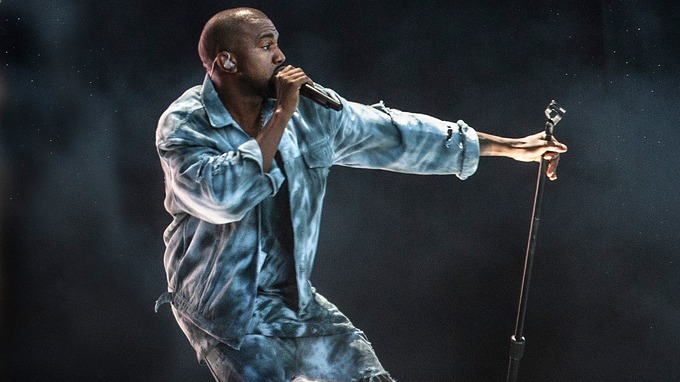 Rock culture still seems to be obsessed with some archaic idea of what constitutes ‘real music’, while the rest of the world has stopped caring and gotten on with making exciting new sounds. The recent petition against KANYE WEST headlining Glastonbury is another sad proof for that. A commentary by NBHAP author Austin Maloney.

In case you missed it, KANYE WEST was announced as the final Glastonbury headliner. And most people were very excited about this. Glastonbury’s headline bookings had been very dull for a while now, tending to lean towards aged nostalgia acts (U2, THE ROLLING STONES, DOLLY PARTON) rather than fresh, exciting musicians. So the fact that the festival had booked the world’s most dynamic, exciting superstar, a man capable of bringing edge to even the Brit Awards, was generally regarded as good news. But not by everyone. In an astonishing petition asking the festival to ‘Book a rock band’, a British music fan Neil Lonsdale wrote that the KANYE booking was not the most exciting thing to happen at Glastonbury in years, but in fact ‘a musical injustice’ and said that ‘Kanye West is an insult to music fans all over the world.’ And even more astonishingly, this petition had 100.000 supporters at the time of writing.

It seems bizarre that people can hold these kind of opinions in 2015, but it’s a symptom of a conservative element in rock culture that’s been present for a very long time. ‘Rock’ with a capital R culture has suffered from conservative leanings since the end of the sixties when Mick Jagger started buying wider belts and THE WHO acquired their first yacht. And it’s resulted in an undercurrent within rock culture that remains opposed to anything other than straight, white men playing guitars and drums. This undercurrent remains obsessed with the idea that music peaked in the late sixties and has totally rejected every new idea since. It rejected DAVID BOWIE and the glam rock wave because the make-up on their faces made them feel uncomfortable. It exploded in a night of impotent anger during the ‘Disco Sucks’ campaign. And these people still exist and still get upset that the musical world doesn’t conform to their views. They’re the kind of people that comment on BEATLES songs on YouTube and write: ‘This is real music, not that modern rap stuff.’ Please note that even Paul McCartney recently collaborated with the rapper. They’re the kind of people who get genuinely excited by ROYAL BLOOD. They’re the kind of people who still buy new FOO FIGHTERS albums in 2015. They are the kind of people whose musical opinions are the exact same as that of their fathers, it seems. And there’s nothing more tragic than someone into the exact same music as their dad. 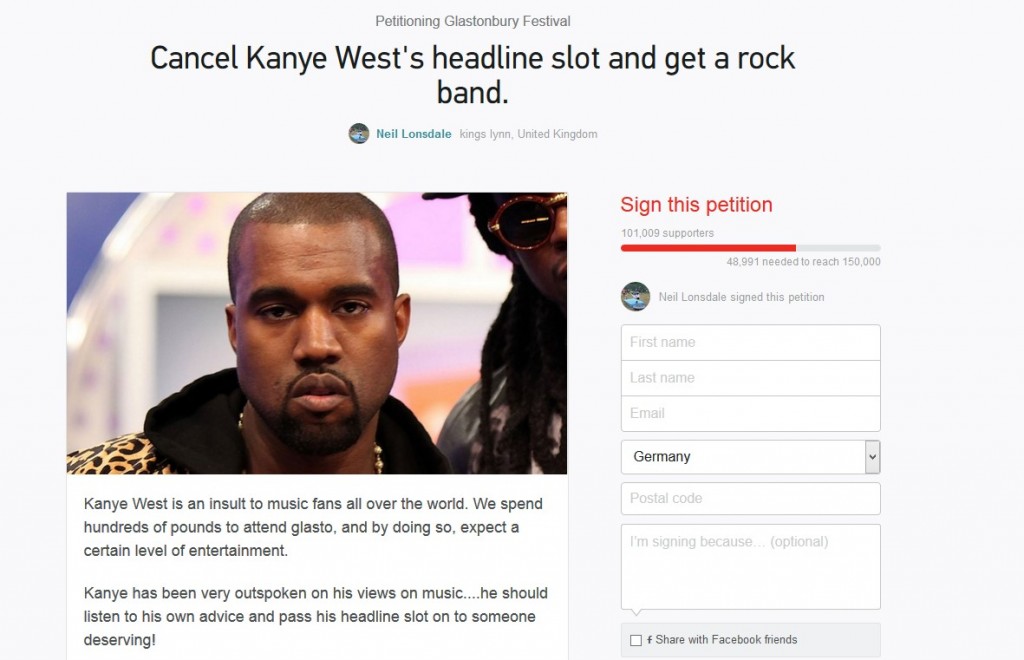 The masses have spoken. Right?

‘New ideas have moved on to other genres’

Even bands that are normally known for their adventure and open-mindedness can occasionally show signs of ‘real music’ syndrome. ARCADE FIRE’s Win Butler drew attention when he said ‘Shout-out to all the bands still playing actual instruments at this festival’ at Coachella last year. And it’s this kind of attitude that turns people away from rock music and leads rock to stagnate. Of course, there are still a lot of exciting rock and guitar bands, but there’s also a sense that the burning creativity, the new ideas have moved on to other genres, like electronica, pop, rap and hip-hop. And after his astonishingly good, ground-breaking Yeezus album, there are very few musicians around more exciting than KANYE now. Which is why he’s a perfect headliner for Glastonbury. If rock music fans want to see rock bands on the stage, they need to drop the conservativism, open up to new ideas, listen to other genres and create an environment where rock culture can produce artists as innovative and exciting as KANYE. Because if your attitude is still just to get rid of Mr. WEST and get the likes of MUSE or COLDPLAY to headline for the millionth time, then the rest of the music world is still going to want to have nothing to do with you. Emily Eavis from the Glastonbury Festival just made her point clear in The Guardian, defending their decision.

NOEL GALLAGHER recently complained about the fact that pop acts dominate the charts and Wembley how he hates the fact that the power of creative rock music seems to be on an all-time low at the moment. Spineless indie-rock kids and uninspired rock heavyweights won’t deliver the soundtrack to the revolution, that much is for sure. The fact that Glastonbury books KANYE WEST should not work as an offence for rock music fans all over the world but rather as a motivation to reclaim the throne (if there is such a ridiculous thing). Rap music currently provides more punk spirit than rock music. It’s a fact and until that changes please, goddammit, let KANYE play!