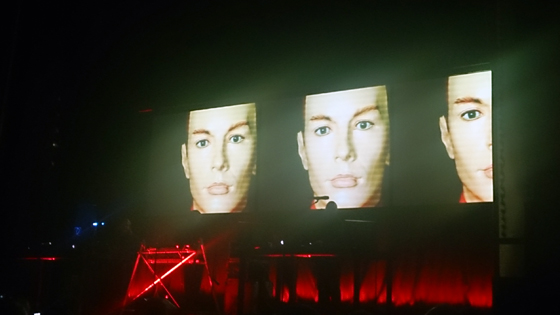 “Those kids weren’t even alive when KRAFTWERK appeared” – yeah, well, haters gotta hate. Especially those, who – without being asked – confront you with their pseudo-elitism which is based on frankly nothing but: age. So, while you are busy ignoring the old man’s lamento at the bar, you start recalling what KRAFTWERK actually mean for those of us, who weren’t lucky enough to be born in the 50s or 60s. Pioneers of electro pop? Check. Most successful German music export? Check. A well kept and mysterious legacy of great music? Check. Up to this day, there remains to be a mystery around this grand project; its timelesness and avantgarde spirit. At his current “Off The Records”-tour, you can at least get a glimpse of what KARL BARTOS, part of the legendary Man-Machine-line-up is capable of doing; still, after all those years, his music is sheer uncompromised melody and pop within a framework of proto-EDM.

BARTOS is professional enough to not artificially emancipate himself from his Kraftwerk-background. As a co-author of timeless songs like The Model, he is free to put them wherever he wants – and he consequently intersperes the band’s classics randomly here and there. This is why you briefly realize how close his own songs – especially from his latest record – are to the basic KRAFTWERK-sound; yet they still stand out. There is no doubt that his own music is as blank as it is deeply structured and formed by a vision. Coherently blending video-installations, the pounding beats of Atomium etc, and spheric, meandering soundscapes into each other, BARTOS acts as the wise maestro of an impressing audiovisual concept.

We live in times in which guys with robotmasks and vocoder-love rule the Grammys – so, I guess you could say that the Man-Machine’s alive and well and maybe more vital than ever. Visiting his “Off The Record”-tour is as much a satisfying, retro-driven look back at a grand musical legacy, as it is a brave attempt to articulate future. KARL BARTOS himself does not need these classifications anyway. This man is as calm and concentrated as ever, closing the night by stubbornly repeating: I have to return some videotapes – now this is retromania how we like it.

Take your chance and pay a visit to one of the last “Off The Records”-shows: