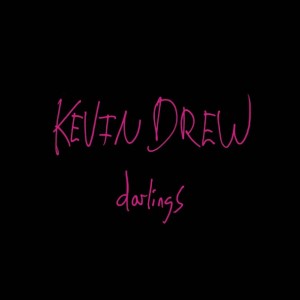 It’s the third year already – three years since the glorious BROKEN SOCIAL SCENE announced their ‘hiatus’; a word which, to be honest, very rarely means what it says. More often it is better described as ‘split’. For some reason though, bands tend to avoid this clear vocabulary lately. Either because of their urge to sustain chances for a possible comeback or because they are afraid to abolish a functioning creative system. What does KEVIN DREW‘s Darlings have to do with that, you ask? Well, it’s this latter opportunity which is very well exemplified by this record. DREW, singer and songwriter of BSS nowadays openly states in interviews that he recently felt a lack of creative community like the one that he found in his former band – despite all the negative aspects that added up in the late years of BROKEN SOCIAL SCENE. And this is the reason why he gathered some old friends and intuitionally started recording new songs. The result is called Darlings and is a simple yet multi-layered pop-album you can get sucked into very easily.

To get this straight: There are a lot of moments on Darlings in which you can’t help but think about the distinctive mixture of post-rock and baroque-pop we used to hear from the great Canadian Indie community DREW was a part of for so long. Nonetheless, it has a certain positive vibe about it, that makes it a clear stand-out. Or to put it this way: Darlings is a bunch of pop-songs that some other big names in that field recently weren’t able to publish (sometimes you feel as if you listen to a hybrid of Chris Martin and Thom Yorke). Mainly, because there is not enough of risk involved in the output of these comfort-zone-bands. Which doesn’t mean that Darlings not also contains the danger of getting into slick regions. Unfortunately, the opener Body Butter is such an over-the-top-moment. But, as KEVIN DREW is a songwriter of highest skills, the following Good Sex is an example for simple yet extremely functional understated pop-songs in the verse, with a slight U2-ish extravaganza in the chorus. Add the NSFW-video and you’ll get the mood of this record.

As we mentioned it now: Maybe you already noticed the quite – let’s call it – physical songtitles. And yes, this is a record mainly dealing with emotional and, frankly spoken, sexual intimacy. A slippery field on which a pop-record has to deal some serious cards from time to time in order to maintain a certain amount of uprightness. DREW is aware of that and therefore Darlings now and then returns to some more reflective moments like My God or mildly outrageous bits like the chorus of the Bullshit Ballad. It is this variety that strucks the listener and what makes this a highly charming record. Pop without showing-off. A lesson in gentle-listening experience from KEVIN DREW as the Bob Ross of lovesongs – basically a bit embarassing but he is good enough to act as a natural authority on this. Musically, it is well served without any doubt. No chance for BSS though?

Former BROKEN SOCIAL SCENE-singer KEVIN DREW‘s ‘Darlings’ is a bunch of serious and playful songs about sex and love – a surprisingly unprentious pop-record.