I am going to be honest with you: As much as my fondness of Radiohead has been continually nurtured over the past years, ever since stumbling upon long-become classic rock ballads such as High And Dry or Fake Plastic Trees (and learning to play them on my acoustic guitar) in my late teens, there have been enough episodes of their musical output, where I couldn’t help thinking: What the hell is that and why am I listening to this?

Kid A, the band’s fourth album and following OK Computer, has its safe place among these strange experiences, for all its eerie vision and sonic … well, let’s just say, eccentricity. Grown out of a serious writer’s block, collective burnout and the intrinsic need to change everything, Radiohead pulled off the final dive of a rock act into artsy electronica, marking a major departure for their own sound, but also for future generations of alternative music. Both in its style and the times it was born out of, “Kid A is the most emblematic album of the modern era”, writes critic Steven Hyden in his new book, that is entirely dedicated to the record’s legacy. He might have a point there actually.

It only takes some seconds to let the gloom in. Warm organ sounds, a few unintelligible distorted mumbles, and then Thom Yorke sets the tone. And it is one of despair, even if the title of the opener Everything In Its Right Place doesn’t seem to foreground it. The affair is about to get more electronic and minimal on title track Kid A, with vocals almost impossible to identify, heavily distorted. Then The National Anthem kicks in, a frenzy piece toying with wild electronic guitar riffs, set free bass loops, and brass instruments taking it away. This is not a rock band flirting with electronic sceneries as on OK Computer – this is a band trying to destroy themselves, ending up by pouring their agony into experimental fractures of sound that are at once terrifying and fascinating to their very core.

The strength of this record lies therein that it breaks apart your expectations, once you think you got the vibe of it. How To Disappear To Completely, my personal favourite, sets it off in a more comfortable (Nice Dream)-reminiscent acoustic manner, brooding over world-weary tristesse. “I’m not here / this isn’t happening”, as its key punchline, there is melodic structure here. But it is also going to be one of the few times that is happening, as things are about to get more wild. As Optimistic sends in ranges of guitars, In Limbo builds around Yorke’s melancholic croonings, framed into mellow, yet erratic harmonies. Idioteque changes the game yet again then. With Yorke’s voice at the center, no guitar, no bass, but with a kick-drum and based on a sample from electronic pioneer Paul Lansky, this one is the most demanding, weird and alienating moment of Kid A.

… and cut up the meaning

Does it really make sense trying to extract meaning when there obviously none left to have, or even willingly destroyed? The lyrical side of the record was mostly approached by Thom Yorke cutting up words and phrases and assembling them together randomly, without any principle. That way, grotesque collages of banal slogans (“You can try the best you can”) and expressions of existential doubt (“I’m not here / This isn’t happening”, “I’m lost at sea / Don’t Bother Me”) go along bewildering images (“Yesterday I woke up sucking a lemon”, “I laugh until my head comes off”). 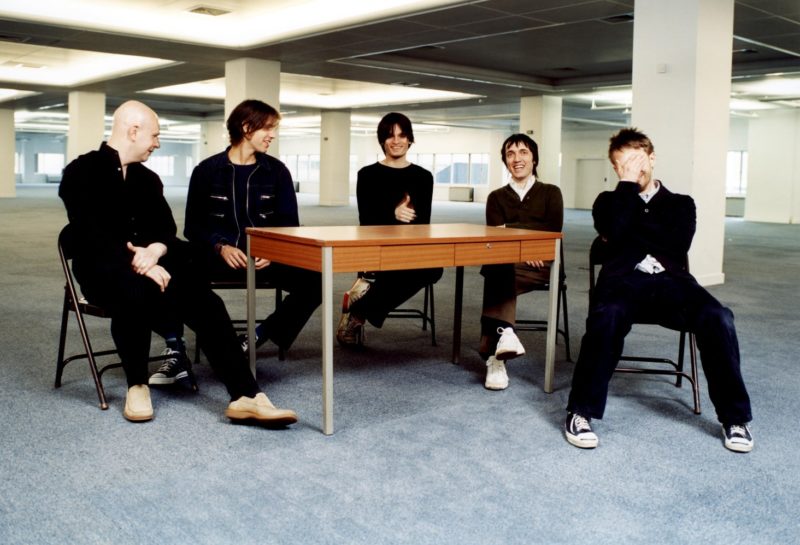 In its uncanny cacophony of bleak surroundings, horrific visions of a future world, with the individual (artist) being marginalised and exploited, Kid A epitomises that feel of modern alienation, which we all have become familiar with. It seems like a radical sonic twin of a Black Mirror episode – likely set in a universe light years away from our world and yet so remarkably near. In the universe of KID A, it is really not “everything in its right place”. It is more like the pieces of a shattered world are lying all around the floor with no one left to identify and to re-arrange it all back together.

‘Here I’m allowed
Everything all of the time’

As the organ-led finish line of Motion Picture Soundtrack, accompanied by harp flutter, rounds off the strange adventure in a quite peaceful manner, the febrile strokes of the last forty and something seconds are calmly gathered together in a manner of a tranquil, maybe exhausted, state of mind. For all its nervous sonic excesses, its nightmarish poetic vision and fragmentary existence, Kid A is also capable of that, to put your mind at ease, if only at last. And in the end, it has that quality I miss in a lot of albums lately: It works as a whole album and has to be digested over and over and over, until you begin to fathom what it is and why you are listening to it.