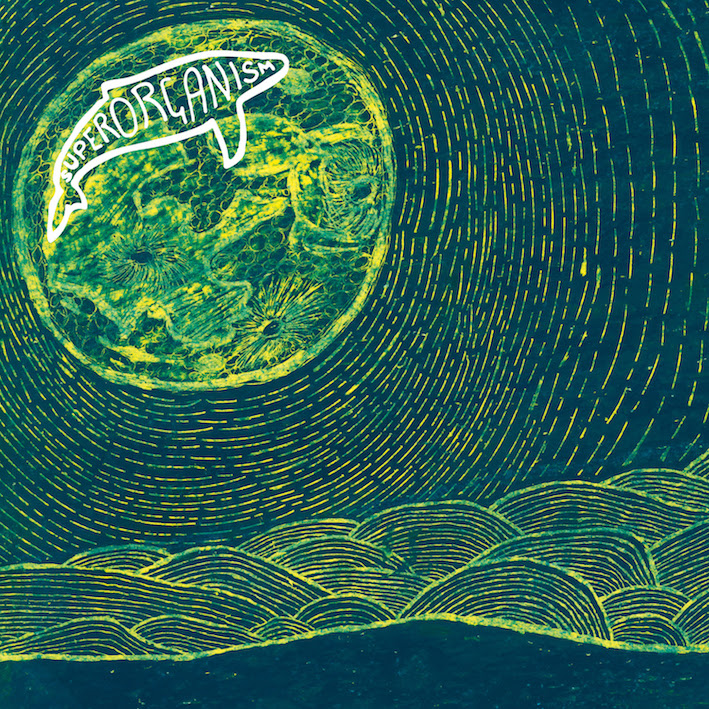 Equal parts sensory overload and streamlined pop affair, the East London octet’s debut will make you cringe and grin at the same time.

While most of the blogosphere might at some point have come across East London’s new buzz band’s output over the course of the past half year somewhere on the internet, my first interaction with Superorganism was as mundane as a cheeky Instagram ad. Listening to the songs of their self-titled debut album for Domino unravels a cacophony of bubblegum indie pop, a sound that draws from the aesthetic of artists like Jay Som or Japanese Breakfast while throwing it into a blender with synthesizers, eccentric samples about shrimp farms and the excesses of meme culture. Superorganism like to make you know they’re weird and proud af about that, which you’ll either embrace wholeheartedly or turn away from with horror. We’ve heard elements of it ten years ago already, when a young British woman with a lot of attitude landed a smash hit ripe with gunshots and cash register sounds.

But while a quick look into M.I.A’s lyrics from 2007 suggests that we might be trapped in a time warp, it also prompts the thought that we’ve failed to take a more careful listen back then. As Superorganism suffocate us with their carefree attitude, we would not even notice that they are hurling at us the same scraps of conversation we’ve learned to read over while scrolling through our feeds. When they conclude that Everybody Wants To Be Famous or that Nobody Cares, they do little to fathom what drives the behaviour of these persons they’re describing – but maybe precisely because such an effort wouldn’t do their blatant shallowness justice. I am tempted to dismiss Superorganism on the grounds of its obnoxious spoken-word passages and weird guitar twangs. In a way, however, it perfectly sums up the world we’ve grown accustomed to, and even I do find myself grooving and singing along to their songs every once in a while. (Igor Franjic)

Song to get you started: Reflections On The Screen
Stream it now: ► Spotify / ► Apple Music / ► TIDAL 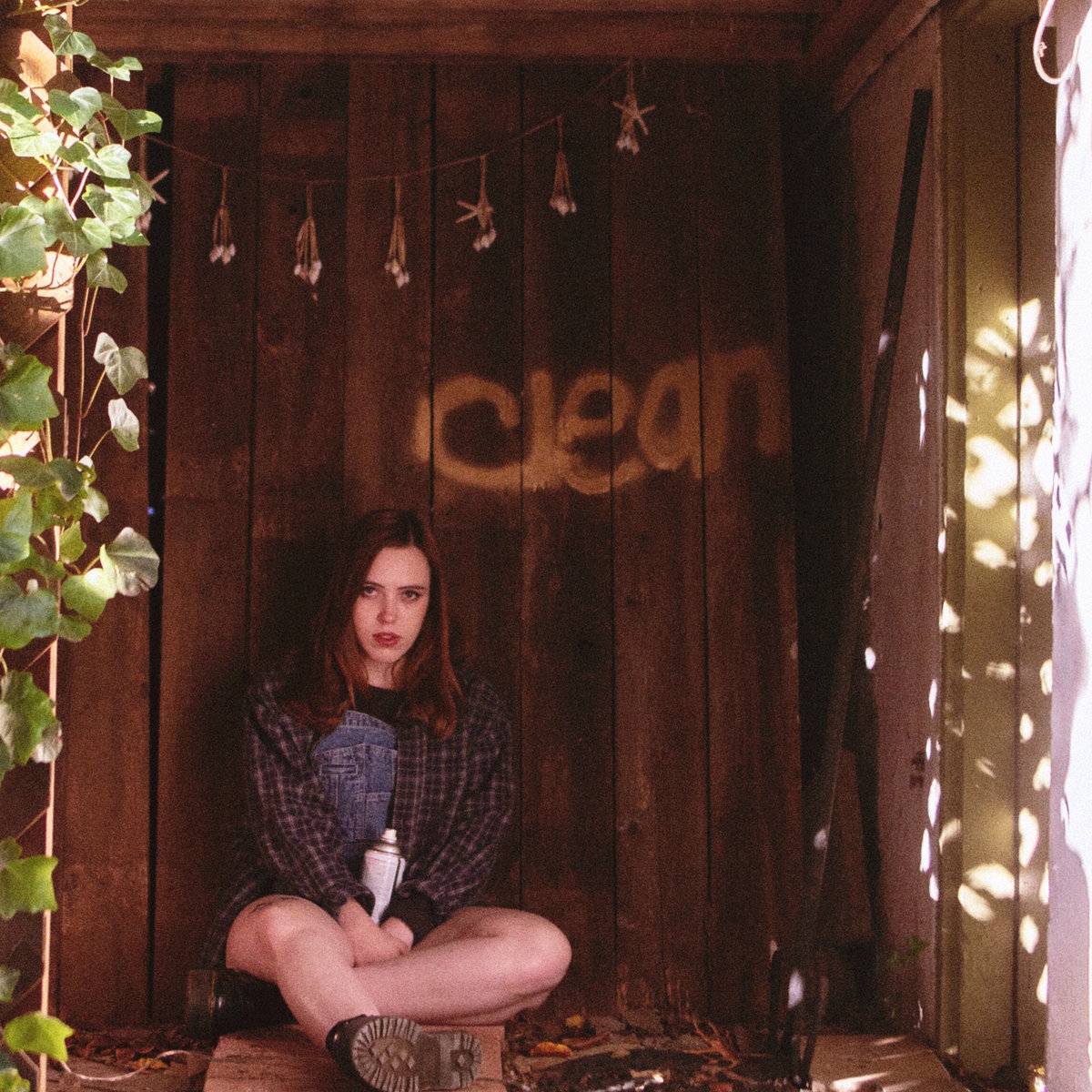 Listen to the artist’s journey from the bedroom to the studio.

If you think of the masses of music on the internet as wheat and chaff, the songs of Sophie Allison from Nashville clearly belong to the first group. She started to make music at the age of five and gradually developed her songwriting and recording skills. Eventually, her intimate Soccer Mommy recordings on Bandcamp lead to a fan base, live shows and last year’s release of Collection, a promising compilation of her work up until then.

On her first proper album Clean, Allison fulfils the aforementioned promise and takes her music to the next level. Recording with a full band and the high-definition studio sound clearly benefit tracks like Cool or Your Dog. At the same time, several songs or song parts consisting just of Allison and a guitar evoke the intimacy and rawness of her earlier DIY bedroom recordings (e. g. Still Clean, Flaw). Love and its ephemerality are still predominant, but other coming-of-age topics are addressed as well (Cool, Skin, Scorpio Rising), in Allison’s typical wise, authentic and light way: Clean is a cohesive album that sounds ‘like sitting in a field in the South in the summer at night’. That’s what we need right now, don’t we? (Jessi Schmitte) 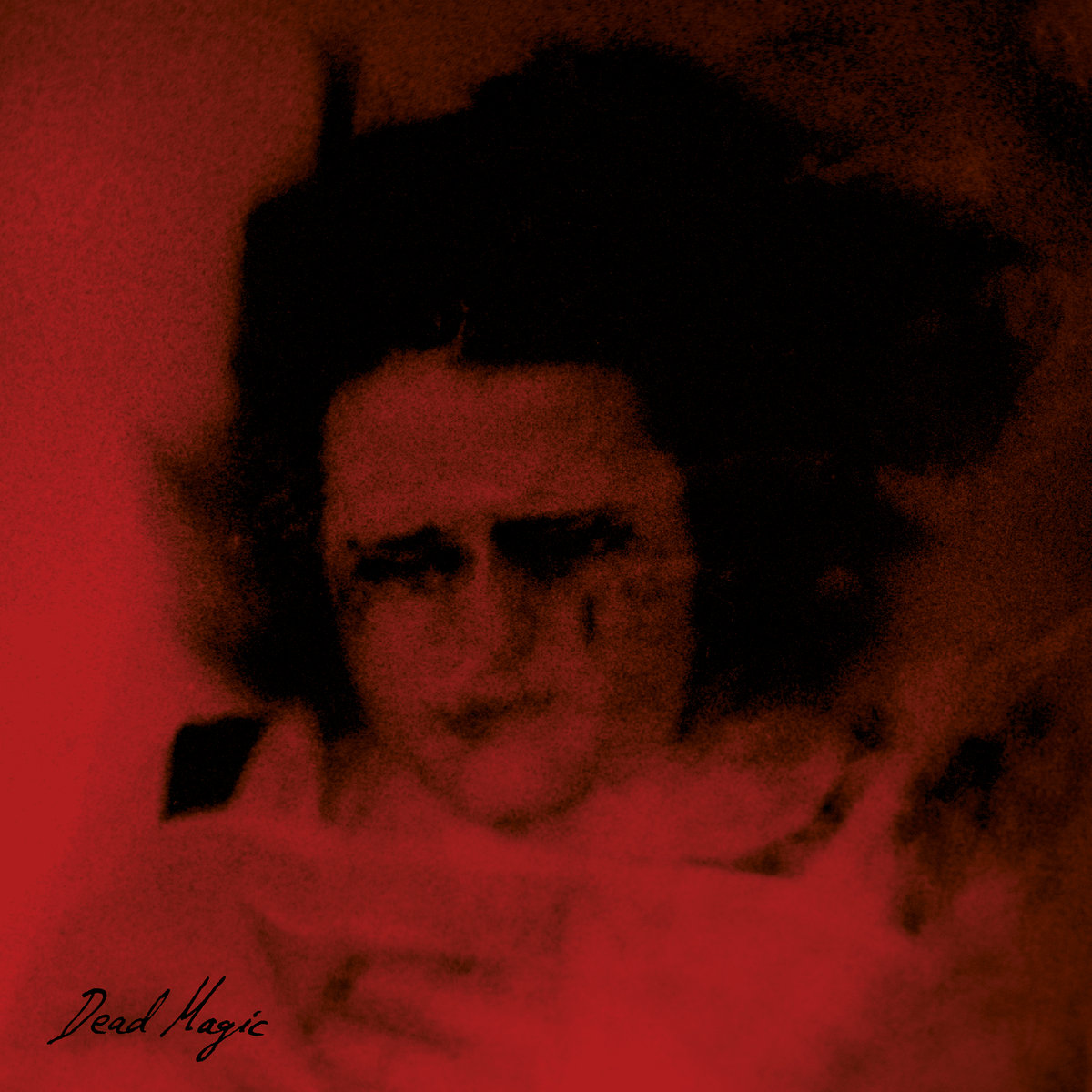 What we witness on Dead Magic might very well be the becoming of the new queen of Noise Rock.

It’s about time to admit: Anna von Hausswolff is not to be underestimated. Neither can her music be compared to her influential father’s avantgardistic works. Nor can she be perceived any longer as ‘that organ lady with a knack for black metal’. At this point, peaking in Dead Magic, Anna von Hausswolff transcends any possible preconception the listener can have of her music. From the true horror of the album’s cover, over the sheer magnitude of the album’s opener The Truth, The Glow, The Fall, to the oppressive physicalness with which von Hausswolff emits every single note she sings on The Mysterious Vanishing of Electra: Dead Magic is hard to bare and even harder to avoid.

The conceptual, epic element has been inherent to Anna von Hausswolffs output before. But to these five songs, all epic in their own ways, she also added some existential madness. Not unlikely that she picked that up by touring with Swans lately. Michael Gira’s legacy as the saviour of noise rock and his sense for repetitive heaviness definitely left traces in Dead Magic. But at the core it’s still von Hausswolff creating her special vibe of doom gospel with the pipe organ and her voice (a voice that develops more and more into a polyphonic greek choir of its own). The elements are the ones she already used on predecessors Ceremony and The Miraculous – but they’re heavily bended towards the abyss even further. And that’s before you take a closer look at the lyrics. After I already called her the ‘nightmarish Joanna Newsom’ on here, I might as well make another bold statement: What we witness on Dead Magic might very well be the becoming of the new queen of noise rock. Whatever spell von Hausswolff cast, it’s working. (Henning Grabow)

Song to get you started: The Truth, The Glow, The Fall
Stream it now: ► Spotify / ► Apple Music / ► TIDAL 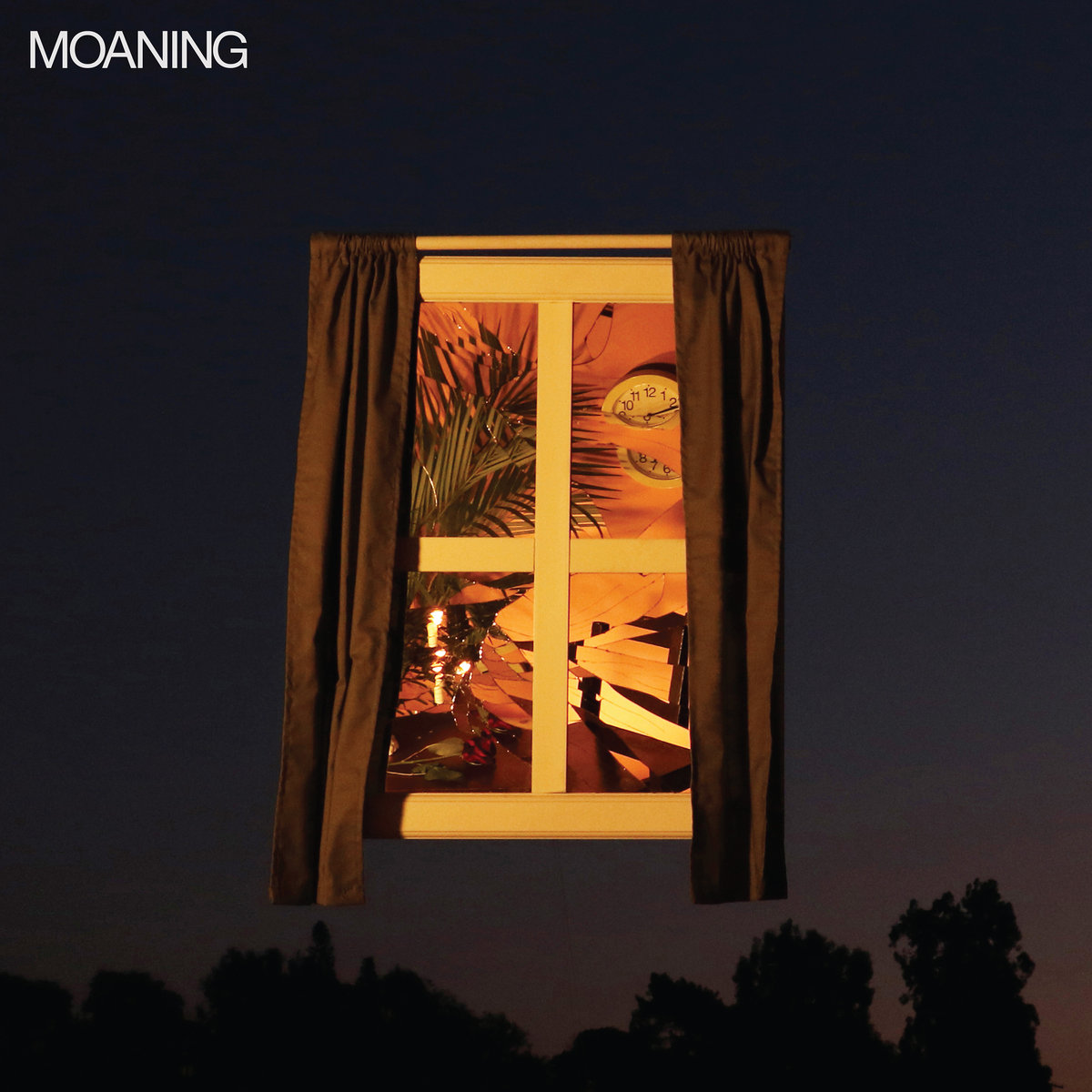 The debut album by the Sub Pop signing is a must-listening experience for all lovers of gloomy post-punk with an extra dose of emotion.

It’s kind of fascinating that there hasn’t been a sinister post-punk band before Moaning that decided to name itself that way, at least none I know about. Raised by Los Angeles’ always vital DIY scene Sean Solomon, Pascal Stevenson and Andrew MacKelvie make a maximum out of that name as they release a barnstorming self-titled debut album that feels indeed like a celebratory Moaning in many ways. Produced by Alex Newport (At The Drive-In, Bloc Party) the three-piece delivers an album between determination and depression where the dark undertone lays side-by-side with a raw melancholia, fuelled by frustration. It’s a recipe that never grows old and which makes even more fun when the songs are as good as they are on this one. In its wildest moments like the urgent opener Don’t Go or the furious singles The Same and Artificial the longing in Solomon’s voice teams up with the furious playfulness of his band members, recalling icons like Joy Division or – more recently – Preoccupations.

However, it’s the balance that makes the Moaning debut such an entertaining experience. Right next to the noisy garage rock moments of tracks like Does This Work For You the band often also slows down the tempo, giving tracks like the Slowdive-infected Tired or the New Order-referencing Close a more emotional appearance. It’s a thin line from sentimental to catastrophic for the trio and they brilliantly know how to walk the tightrope between teenage angst and mature confidence. Just like Metz, Ought or Protomartyr these kids take a familiar sound and vision and take it to the here and now where that music is more needed than ever, to say the least. Come on, everybody, let’s all join forces for this celebration of misery. (Norman Fleischer)

Song to get you started: Artificial
Stream it now: ► Spotify / ► Apple Music / ► TIDAL

Haley Heynderickx – ‘I Need To Start A Garden’ 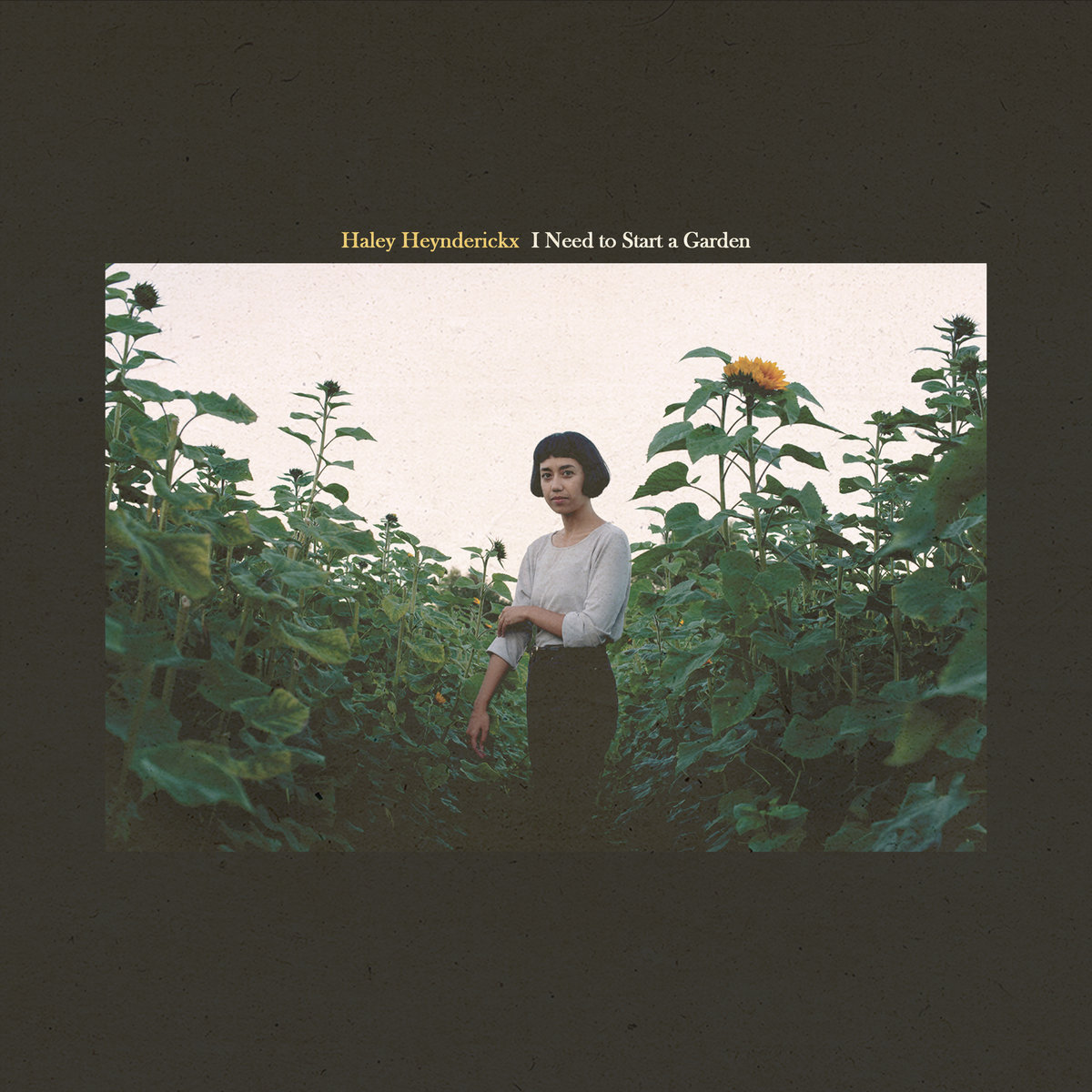 On her first full-length we witness Haley Heynderickx developing a voice and sound of her own with a lot more underneath the surface than it might seem.

Sometimes artists pop up in your surroundings with a perserverance that you really can’t help but start to care. That’s what happened with Haley Heynderickx who I came across first by some song sketches, then saw her live, experiencing her ability to charm crowds and kept on following her few releases ever since. So yeah, at this point I’m probably not even objective anymore. Nonetheless, Heynderickx debut full-length I Need To Start A Garden really is something to recommend. Here’s a young singer who has been developing a voice of her own, establishing an edgy, witty, folkish sound that stands out – which is really not an easy thing to do these days.

Many of the songs on I Need To Start A Garden have been part of the Portland-based singer’s previous releases but still blend into one another beautifully. Throughout these eight tracks, Heynderickx shows early strenghts similar to Angel Olsen’s Half Way Home. She mixes an educated form of post-romanticized hippie-folk with more uncompromising sounds and styles. The playful carelessness of a song  like Oom Sha La La is just on the surface: Deeper within it starts to scramble and crack just like the protagonist is searching for a change in life, reflected by Heynderickx’ outburst in the end. Untitled God Song on the other hand sees a young woman trying to come to terms with some sort of spiritualism in her life – and whatever that higher calling might be called, in her world it is definitely female. There is a lot to discover on this record if you care to listen closely. And surely there’s still a lot more to expect from this young singer. (Henning Grabow)