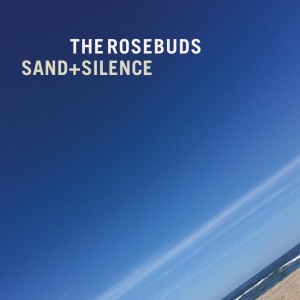 North Carolina bred-duo THE ROSEBUDS, consisting of Ivan Howard and Kelly Crisp, have released their 6th studio album, Sand + Silence.  Recorded at Justin Vernon’s (BON IVER) studio, the album features Vernon on guitar and synths, and some other members of BON IVER. This album, while technically accomplished, does nothing new for the overrun and overplayed genre of indie-folk pop.

Working in a brand of non-offensive indie rock and folk, Sand + Silence is the kind of unobtrusive, easygoing pop the precedes a band becoming your parent’s favorite band, especially if your parents are suburban types who overuse words like ‘Super!’  and ‘great.’  (This album just proves that not everything Justin Vernon touches can have the pathos and drama that so infuses BON IVER records.) With clichéd and cringingly shallow themes on songs like Death of an Old Bike or Looking For (which actually has the lyric ‘looking for my way home’) the album never goes into completely sunshiny pop or brooding, reflective angle that would make it any way interesting and memorable.  You could almost get there with  Walking, which has some nice ‘ooohhh’ backing vocals and upbeat drum tempo that could be a 1960s early rock’n’roll track, but THE ROSEBUDS still keep the languid, generic vocals that give the album an overall unfinished quality. The promotional literature details that this sounds like the result of the ‘loose joyful energy of making music with friends’ yet the songs don’t have any additional polish or reworking to make Sand + Silence anything greater than a well-recorded rock jam session.

The sixth studio album, ‘Sand + Silence’, from THE ROSEBUDS fails to distinguish itself, with uninteresting lyrics over basic, simplistic folk rock sound.