Looking at it sarcastically, one could plead that The Strokes anticipated their tremendous rise and decline as early as with their debut LP Is This It. Popular opinion has it, that this album remains a singular peak for the band, that may have catapulted the five young lads around lead singer Julian Casablancas onto a well-deserved rock’n roll pedestal, though leaving them in the impossible position of running after their own myth. As ironic as the story goes, their sixth album The New Abnormal, though not quite reaching the silver linings of their rookie days, was surprisingly well-received, earning a Grammy for Best Rock Album. Well, if that isn’t something.

However, one thing is certain: As quick as The Strokes rose to massive fame around the release of their debut, as sudden was their plummet down to the ground, with the band releasing their not so hype-blessed Room On Fire or First Impressions Of The Earth. Not to even talk about Angles or Comedown Machine. Was Is This It really that good? Or was it just that essential album released at the right moment in time, evoking the watershed it did in the aftermath?

Hard to imagine nowadays, but back when The Strokes finally landed with their debut, the rock’n roll landscape was still plastered with mainstream nu-metal bands such as Limp Bizkit, Slipknot or Linkin Park, while the void of the post-Brit-Pop era was still left unfilled (if you ignore softer bands like Coldplay and Radiohead). In other words: Rock’n Roll was in need of something new. Well, here come The Strokes with their sluggish, grungy and relentless garage rock revivalist sound. Hailed by the NME as the new “saviours of rock’n roll”, these five lads, apathetic and slack in their demeanour, with scratchy guitar fronts roaring underneath the budding urban poetics of front singer Casablancas delivered exactly what people didn’t know they craved.

Leaving just in time, stay there for a while
Rolling in the ocean, trying to catch her eye
Work hard and say it’s easy, do it just to please me
Tomorrow will be different, so I’ll pretend I’m leaving

(The Strokes – The Modern Age)

Did The Strokes pull off anything particularly new? Not really. With their sound mostly being lifted from the vaults of 60’s and 70’s garage rock and Casablancas’ voice leaning off that of Lou Reed’s, not to speak of the residing post-punk flare, the quintet rather breathed life into a worn-out form. And yet, the air of confidence and the élan with which the group set out to voice modern-day tales of living and loving in New York City, combined with their neo-vintage rock’n roll signature, surely vindicated the success and the following Is This It inspired.

And by all means, it is hard to imagine a similar wave of bands rushing onto the surface in the years after: Arctic Monkeys, Franz Ferdinand, The Kooks, The Libertines, The Hives, Maximo Park … You name them, once the seed was sown, there was no way of escaping this new generation of rock bands that to this day has defined our understanding of the sound of “indie music”. They were “as influential to their era as the Velvet Underground or the Ramones were to theirs”, writes Lizzie Goodman in her oral history on the rock scene of the early 2000’s Meet Me In The Bathroom. The hype was real that time around, and it was probably the last time the music industry saw a movement taking place like that again. 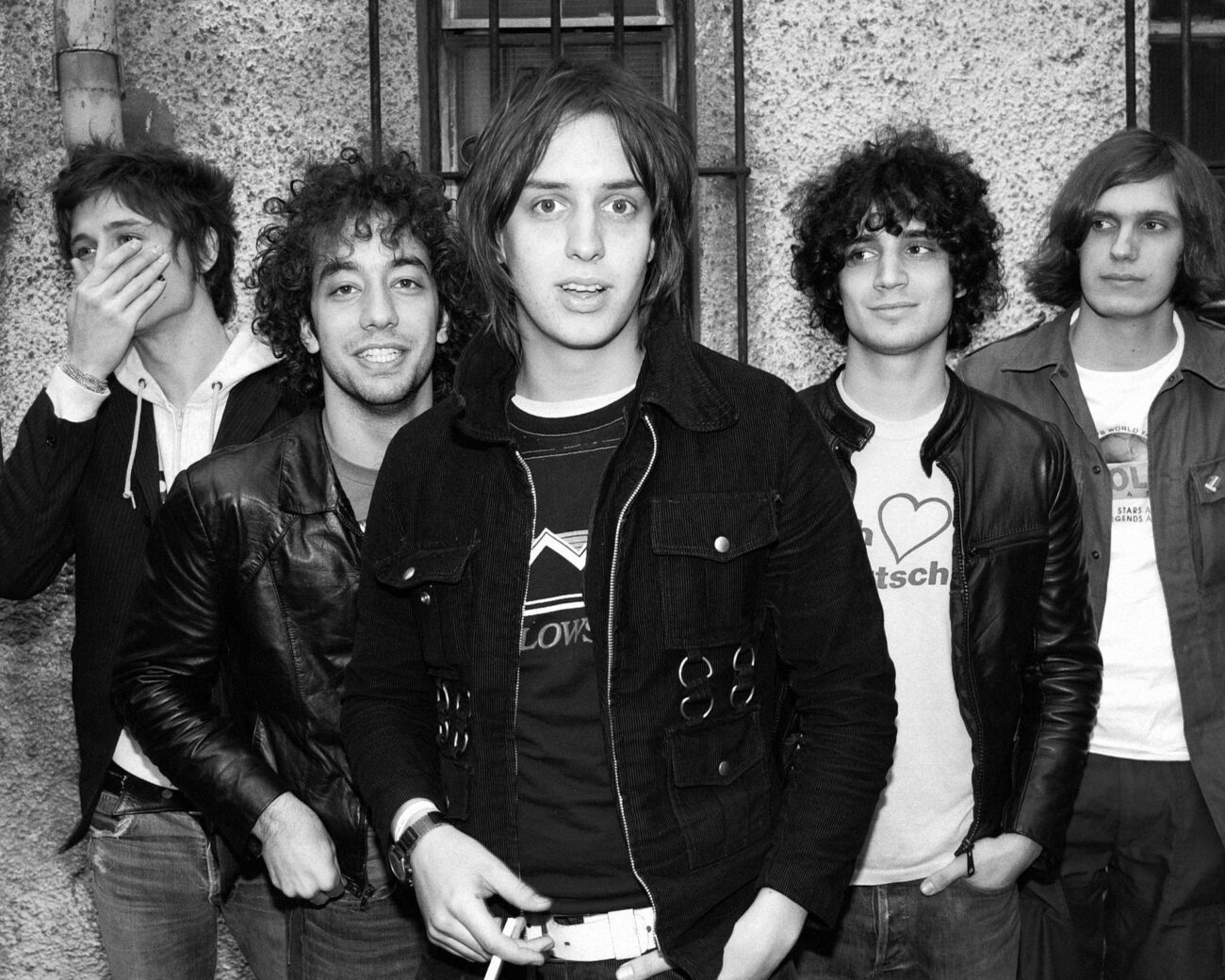 The Strokes back in the day (Photo by Roger Woolman)

The Poetics Of Urban Alienation

From the disillusioned air of title tune Is This It (“We all disagree, I think we should disagree, yeah”) to the frantic The Modern Age, right into facing the heated, Aldous Huxley-inspired Soma with its crazed escapist imagery, right on to the dooming love theme of Someday or the desperate resignation of Last Nite, Is This It is full of harsh present-day realities, packed in grungy and hard-edged guitar-drowned hooks. It is relatable because it is loud, passionate and real, in all its raw appeal.

Though no song resembles the other as to make up a signature here just yet, what all of these eleven tracks have in common is their uncompromising drive forward, relentless, forceful and fuelled with a sense of fury. Their style may be derived from a grand pool of classic forerunners, but the only way for The Strokes is to head on forward, steering into the future. Such is the spirit of Is This It. There might be little harmony left in the themes the record addresses, but the sonic rush still holds a bliss, which is indeed hard to explain, only to experienced by turning up your speakers the noise kicks in.

As for their artistic determination, The Strokes knew all too well about who to tribute their legacy to and they were never shy to be frank about that. The love for their New York City precursors like the Ramones or the New York Dolls is all well documented, as is their fondness of Tom Petty and Iggy Pop, Nirvana, and yes, even Pearl Jam. At last, there is of course Lou Reed of The Velvet Underground, who was a major influence on singer Julian Casablancas. However, The Strokes knew how to distill yet a unique sound niche, channeling their influences and pointing a substantial direction for the age they stumbled into.

“We want to sound like a band from the past that took a time trip into the future to make their record.” (Julian Casablancas)

A new generations of exciting rock bands is long forming and while the air around nowadays grands such as IDLES, Shame, Fontaines D.C., Sorry, or the celebrated newcomers of Black Country, New Road doesn’t really feel like a hype at all, it’s nice to acknowledge that the legacy of rock still lingers on, although less centred around a specific group or even record. It still makes one wonder, what follows after the era of post-hype. Is there ever going to be another “my record of the decade”, like James Murphy of LCD Soundsystem confessed about Is This It? Maybe The Strokes’ debut holds a special place there, and it has been for many. And I guess no one could take that away ever, even if it would remain their unattainable masterpiece.