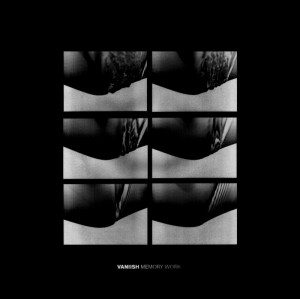 As music editors, we are inundated with band links and albums. Sometimes, we like it. Often, very often we don’t. And sometimes a little dark and dreamy gem comes across your desk that you just have to write about, and such is the case with San Francisco neo-synth dark band, VANIISH. Their debut album Memory Work comes out today, and no self-respecting morose depressive should be without.  Made up of drummer  Keven Tecon (associated with WAX IDOLS and SOFT MOON) Amy Rosenoff (WAX IDOLS), Adam Beck and Nick Ott, VANIISH‘s album has plenty of references to 1980 post-punk, goth, new wave, and synth wave.

Beginning with In Images, a track that slowly builds from a fuzzed out guitar beginning, to Memory Work which starts with heavy drum track and synth overlay.  Kaleidescoped has the refrain “No one left to judge anything/ no one left to say anything,” and is the perfect soundtrack to a Saturday night spent home, watching it rain, contemplating that bottle of pills. Observatory Time is sparser and more difficult: the song repeats it’s slightly askew motif over and over, you’ll be wondering if it’s starting, stopping, or just in a holding pattern.

The album ends with the dreamy, MERCURY REV-esque La foi au fil d’eau which is more shoegaze than dark wave, and (of course) sung entirely in French.

If you call yourself a fan of THE CURE, SAVAGES, JOY DIVISION or the color black, get this VANIISH record.