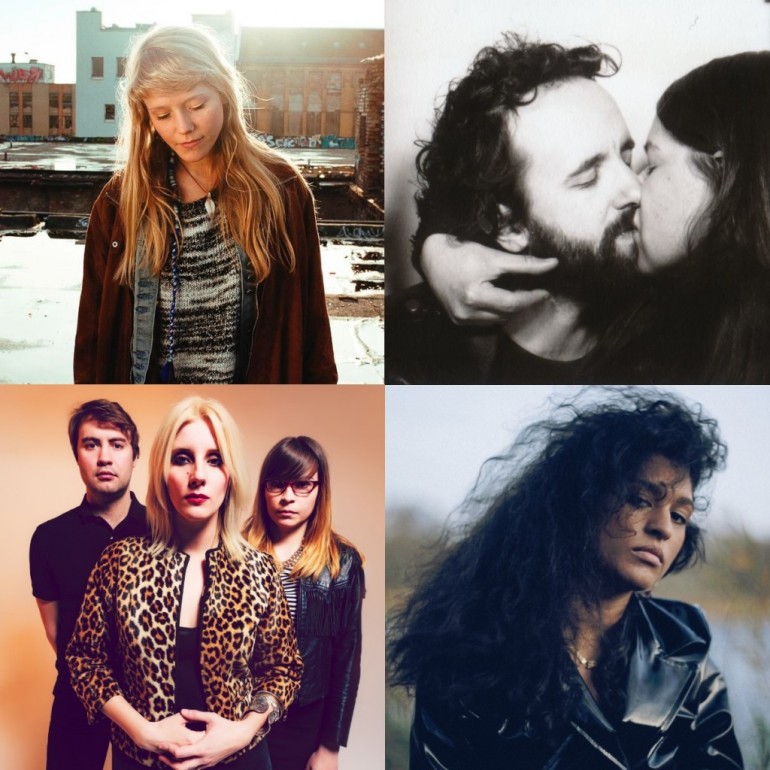 The debut album by crafted South African singer ALICE PHOEBE LOU has been in the making for quite sometime, we must say. Now, the lovely Berlin-based street musician is about to release her debut LP Orbit on April 22 and she just released a first music video from it called Society. It features the young lady with the distinctive voice in various locations all over the world. We were a bit worried that she might lose her unique spirit with the long overdue full-length but this wonderful hypnotic piece of folk pop gives us hope for a wonderful record.

White Lung – ‘Kiss Me When I Bleed’

Garage rock boys and riot girls of the world, get in here. WHITE LUNG just announced their fourth album Paradise for a release on May 6 via Domino at judging from its first single we can expect a lot of frantic energy on it. According to leading lady Mish Barber-Way Kiss Me When I Bleed is about pride and ‘that kind of steadfast, I-don’t-give-a-fuck-I’m-in-love pride in that we all wish we had for someone. This song is my fairytale. Riches to rags and happily ever after because nothing else in this world really matters except love.’ Anymore questions? Here’s your musical answer.

We reported about the catchy Island by FEAR OF MEN before but the new single by the Brighton-based trio is so lovely it really deserves a bit more attention. We’re giving it right now in form of a new music video. Their second LP Fall Forever arrives on June the 3rd, just so you have this one in the loop as well.

It’s been ages since we posted anything about Hamburg-based dark chanson two-piece KRAKÓW LOVES ADANA. But Deniz Cicek and Robert Heitmann just released a new song called Omg I Missed You via Spinnup/Universal and it spreads a really tender amount of fragile tension you barely see that often anymore these days. Welcome back to the duo, we truly missed you.

Of course, BRIAN ENO can release a 21-minute long piece of music because he’s freakin’ BRIAN ENO. The legendary DAVID BOWIE and U2 producer has shared an epic title-track for his upcoming LP The Ship which is inspired by a lot of interesting topics, including World War I and the Titanic. It arrives on on April 29 via Warp Records and we can only recommend you to take an extended break for the following listening experience.

Swedish songstress NADIA NAIR delivers that sort of mainstream-focussed pop you can enjoy without feeling too guilty. Her latest single Blow is an upflifting piece of danceable pop, taken off her debut LP Beautiful Poetry. We think the lady from Gothenburg deserves a bit more attention, wouldn’t you agree?

KENDRICK LAMAR‘s To Pimp A Butterfly is only a year old, but it’s already achieved sacred classic status. That means to try and cover anything from it is a very brave choice, and one that could easily go wrong and end up the musical equivalent of chewing gum on a Rembrandt. Luckily, LA musician VŌX‘s cover of i, for which she teams up with producer Dylan Brady, treats the track with the reverence it deserves as well as putting an original take on it, transforming the track into a dreamy haze of electronic pop.

Joakim Buddee, half of electro-pop duo HEART/ DANCER, also has a solo project called FOREVERANDEVER<3, with which he released a double A-side single this week. Heliotrope, which features guest vocals from Gothenburg singer HELH, is pure shimmering space-pop, while the other side, Gainsboro, has a harsher, feral techno sound. Both can be taken as the split personality of a summer day/night out: Heliotrope is perfect for when the sun shines, whereas Gainsboro is made for the dancefloor when the lights go down.

We don’t know what’s currently going on with indie folk maniacs CRYSTAL FIGHTERS, Ellie Fletcher’s day job, but her new project KYIKI is something new entirely. Her debut single Here For is warped, fuzzy night-time electronica, Fletcher’s voice slipping from an airy coo to a dismissive hiss and juxtaposed against low, rumbling beats. If this is the opening shot, count us very excited for more.

It’s been four years since talented Californian songwriter Ramona Gonzalez and her alter ego NITE JEWEL released a full studio album. Now, the ghostly goddess announced a new LP called Liquid Cool for a release on June 10. A first single from it goes by the name Boo Hoo and it sounds exactly like that slightly spooky piece of dreampop you would expect from a song with such a title. Listen right here.