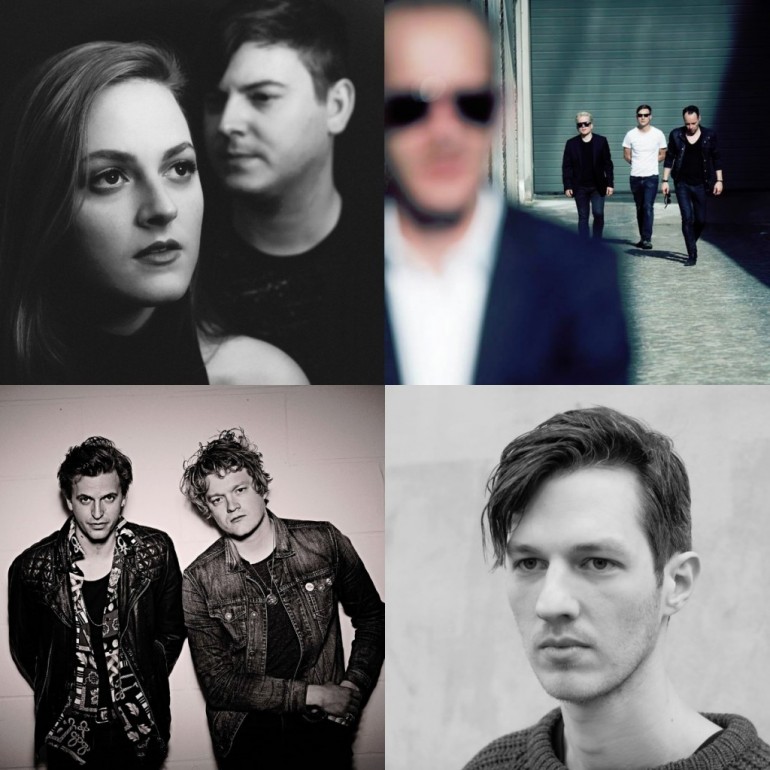 Hello there, DESERT PLANES. That’s what you call a proper debut single. Wake In Fright, the first output by the British two-piece, is an uplifting piece of soulful British indie rock in the finest tradition of FRIGHTENED RABBIT. And the fact that this is just the first piece of music by Tom Farrer and Ben Niblett makes you really long for more from these two. The single arrives via Killing Moon Records on June 3rd and you should keep an eye on them.

The world currently seems to can’t get enough of slightly dreamy retro pop. Following artists like LÅPSLEY and SHURA New York-based two-piece PAPERWHITE is the next band to follow that successful recipe. And, of course, Wanderlust is a song about escapism and dream yourself away from the harsh reality. And who wouldn’t want to join singer Katie Marshall and her brother Ben on this journey, right?

Tom And His Computer – ‘Organ’

If you aren’t already a fan of Danish producer Thomas Bertelsen and his alter ego TOM AND HIS COMPUTER it’s about time. NOTHING BUT HOPE AND PASSION already gave you the premiere for his music video La Fontaine and now another song off his EP Small Disasters gets an atmospheric video treatment. Organ mixes dark wave spirit with gentle groove, making it quite clear why TRENTEMØLLER is such a big supporter of Mr. Bertelsen.

It took them a while but now beloved German dark wave four-piece IMAGINARY WAR are ready to release a follow-up to their pleasing 2012 debut. The Verge arrives on May 20 and after they already previewed it with the singles The Way We Feel and Made A Decision last year, Never Fall Apart is the latest teaser we get from it. It’s loud, it’s fast and it’s pumping. Unleash your inner gothic spirit right here and join us for this dark little pop gem.

Norwegians BROEN did the bravest thing you can do in modern society and took a satirical swing at selfie culture in the video for their single No, My God. After their inevitably murdered by the enraged mobs of Instagram, we’ll have their international debut EP Yoga to remember them by.  Yoga is a super-smart collection of art-pop songs, mixed in style from the tense atmospherics of Iris to the colourful bounce of No, My God.  It’s out now.

Swedish group HUMFREE BUG ART were in the process of making their debut record when they hit a slight snag: They stopped speaking to one another. Eventually, they worked their way back into some form of communication and managed to finish the album, and that resulted in new single Eyeknees. It’s a piece of trippy pysch-pop, vaguely remeniscient of bands like MGMT and PASSION PIT. It’s part of their upcoming album Nuthin/Sumthin, out this Friday on Stranger’s Candy.

British trio DEMS are old favourites of NOTHING BUT HOPE AND PASSION (they even produced a guestmix for us back in 2013) but it’s been a while since we heard actual new music from them. But the work on a follow-up to their 2014 record Muscle Memory is almost done with Gold being a first teaser from it. Take a short break from the daily race and enjoy this golden piece of sweetness below.

East Of My Youth – ‘Mother’

For those of you who missed last weekend’s Mother’s Day: Icelandic newcomers EAST OF MY YOUTH got you covered and just recorded an entire song about that universal theme. According to the press release their track Mother was composed in a little cabin deep in the beautiful Whalefjord wilderness and we totally get those references as we listen to it. Fans of dreamy electropop should click right here.

SATURDAY, MONDAY has released a video for Pilgrim, the lead single from his Superset EP, which he released earlier this year. Pilgrim, which features vocals courtesy of BROLIN, is a song loaded with lush pop grace, given a sense of tension and anxiety by the metallic clang of the beat. The video is remarkably poignant, a film of an anonymous 17 year-old refugee (he wished to remain unnamed to avoid threats) and the trauma he feels upon arriving alone into a new, unfamiliar country, paired with scenes taken from news footage of increasing right-wing aggression and violence in Sweden. Both song and clip and well worth your time, as is the Superset EP, available now on Playground.

The catchy You’re Mine by Israli folk/pop duo LOLA MARSH clearly was one of our favourite tunes of the past months and we’re happy to have them back with more music. She’s A Rainbow gives their music a quite cinematic twist, riding on a big wave of strings while singer Yael Shoshana Cohen is doing her finest LANA DEL REY impression. Well, these guys are quite ambitious it seems. Get to know them a bit better via our recent interview feature and listen to the new song right here.