From an artist perspective, the global number one streaming service Spotify is rather a foe than a friend. Nevertheless, despite numerous irritations, inquiries and protests in the past, the platform still has acquired something of an essential player in the music business, which only few artists can afford to dispense. Prominent protests have always accompanied the rise of the corporation, and yet, the current wave of artists abandoning the platform, following Canadian major folk musician Neil Young in the wake of his public reckoning of the service over the misinformation-promoting stances on the coronavirus and vaccines of podcaster Joe Rogan (The Joe Rogan Experience), might just be the biggest one the Swedish tech giant had yet to face in its more than a decade-long existence. And this time the allegations might really do harm. The times are heated up – particularly around everything circling the Corona pandemic – and the streaming service has been caught amidst the very trenches of fake news battles, ethical integrity and nothing less than the matter of free speech.

“They can have Rogan Or Young. Not both” (Neil Young)

Given Rogan’s careless endorsement of science-scepticism and the promotion of fake news advocates, it was only a matter of time that a prominent voice such as the one of Neil Young should follow the notable public protest of hundreds of medical professionals. And it didn’t take long that other high-profile artists – among them Joni Mitchell, and his former bandmates Graham Nash, David Crosby, Stephen Stills – also announced to take down their catalogues from Spotify. 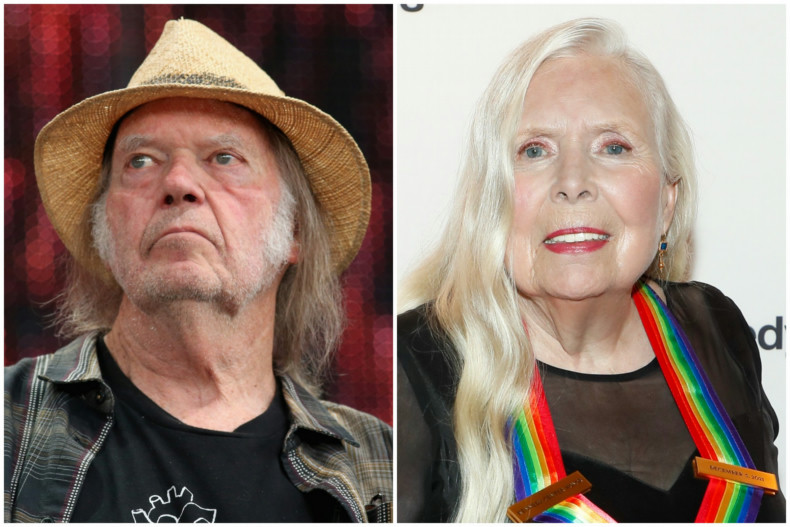 No question about it: Young’s resolution comes as a welcome sign of artistic emancipation from questionable practices of the high tech culture industry of today and demonstrates that Spotify is indeed not indispensably a “necessary evil” for all the artists out there. Also, already now Young and Mitchell leaving the service has generated a bigger medial echo about the crooked politics of a corporation numerous protests in the past simply and sadly couldn’t.

What Kind Of Protest?

However, as righteous as the support for Neil Young and his cause may seem at a first glance, the question remains first of all as to why prominent protest didn’t unleash itself over the fundamental inequalities and the lacks of transparency at work at the platform, and why the musicians did not use their voice to address those in the wake of their exit, as both Pitchfork and The New Yorker observe.

The outcry right now is more than justified and overdue, but does it also address the fundamental issues at work? 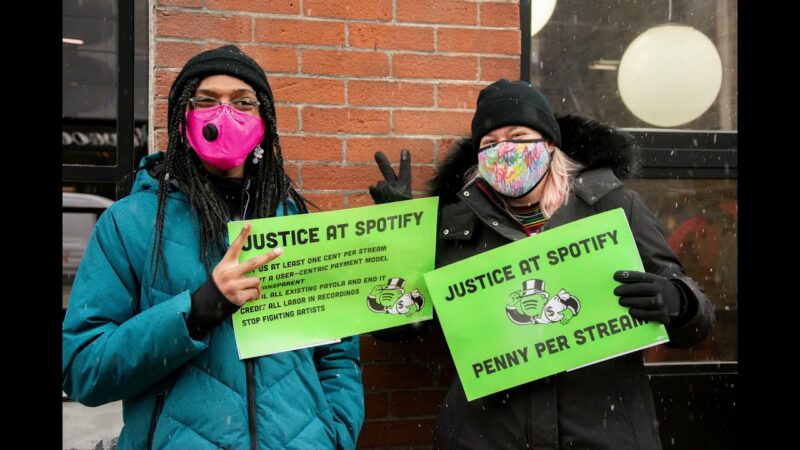 Is one cent per stream too much to ask?

Just last year the Union of Musicians and Allied Workers (UMAW) mobilised protests in cities all around the world to speak up for their #JusticeAtSpotify cause of higher payment rates which currently leaves artists with just a fraction of a cent per stream. At the same time Rogan is compensated by Spotify with the exquisite sum $100 million for exclusively hosting his show. That company CEO Daniel Ek has previously addressed the discontent about low revenues with the cynical remark that “you can’t record music once every three to four years and think that’s going to be enough” speaks volumes not only of his narrow-minded world view but about his conception of artistic creativity at large.

Spotify has long evolved from a mere medium for music and spoken word towards a way to powerful content machine not only engaged with following the trail of money but also seeking to impact the very conditions of creating art.

It is tempting to regard Young’s and Mitchell’s decision to leave Spotify as a welcome endorsement of movements such as the one of UMAW and yet their ethical stance are quickly showing cracks: When one considers that Young promoted an extended free trial on Amazon Music after his exit, while Apple Music hailed itself as “the home of Neil Young” – both services not exactly known for their ethical integrity – it more likely seems that the heart of this controversy is quite centred around the trigger of Joe Rogan’s slurs and says much more about the current debating culture than it does about them quitting Spotify out of moral concerns. No question, them leaving the platform is a vitalising sign and it’s certainly nice to see the corporation wobble a bit and also to witness smaller platforms such as Tidal or Qobuz receiving a boost in subscribers (to be honest, that includes me as well). Yet, most musicians do not have that (economic) liberty to follow their lead. It would have been a kind act of advocacy to address the structural problem of Spotify in the course of the whole dispute.

Should Spotify have given in to Neil Young’s demand to take down Rogan’s podcast from its site? Certainly, that would have been a clear-cut commitment towards their ethical integrity but it doesn’t take much brains to figure out that the moral lines of the corporation do not run along those lines. Sticking with Joe Rogan rather than with Neil Young isn’t much of a qualitative decision after all, but “feels like a particularly nihilistic move”, as Arcade Fire’s Will Butler suggests in a recent guest article for The Atlantic. The platform added Rogan to its portfolio not for his content or fanbase, but because of his wide reach and mostly so he would not contribute to the market value of the company’s competitors such as Apple Music and Google.

Nobody can expect from Spotify to filter and pre-approve every future outlet on the platform, but if the enterprise wants to continue to exist as a service for valuable artistic and informative content it must outline its content guidelines for podcasts. Granted the freedom of speech, a Western tech giant like Spotify cannot afford to act as a gullible platform provider for any dubious agents of misinformation and social disintegration.

As successful as that “business model” might have proven itself so far, things may be heating up even more if Spotify doesn’t comply soon – the current discussion about the efficacy of vaccines might just be the beginning of a tangible culture war whose ends are not to be foreseen yet. It simply does not suffice to add content advisories to every episode that discusses COVID-19 or incidentally claiming to have deleted 20,000 other critical episodes concerned with the matter (which ones you may ask, and according to which standards?). Moderation is key here and as “audio platforms have little experience in moderating content … unlike other social networks” as The Economist observes. So the sooner Spotify saddles up in that regard, the better for the future of the enterprise – and thus for the future of streaming.

The Era Of Convenience Has Come To An End

When Spotify launched its streaming service back in the day it was bringing money into a drained market and was a promising new player in an industry which was threatened to fall prey, among others, to the practices of music piracy. More than a decade later the situation is dire in different terms: Now with streaming more important than ever, the Swedish enterprise has acquired a quasi-singular status and yet is more and more risking to assume a role that has in the past forced Twitter for instance to suspend someone like Donald Trump from its platform. Resistance is forming and if it should amount to more than Neil Young, Joni Mitchell and their supporters, then the Swedish pioneer will likely end up with more than just the recent slap in the face. In the end, it can simply not be ignored that the protest is led off by some veterans of the music world – so is this all just a “rebellion of the boomers”? Well, they certainly have had their piece of the cake and can certainly afford a move like that. Sorry to be blunt here, but their best days as recording artists are over, right? Meanwhile, why there is no sign from industry top dogs like Taylor Swift, Billie Eilish, Adele, Drake, or even Thom Yorke? Sure, that would mean financial losses, but with their impact, a collective outcry of this generation could cause an upheaval that even a giant like Spotify probably would not survive.

The era in which Neil Young and Joni Mitchell came to rise saw them lifting their voice in the form of protest songs such as “Ohio” or “The Fiddle And The Drum”. The current circumstances has them voicing their protest by muting themselves. That’s kind of absurd, isn’t it?

The promise of receiving the entire global music library for just the amount of € 9.99 has always been a problematic approach, given that streaming music has become one of the major ways to consume music. After all, even our blog depends on the comfortable service of Spotify and has to challenge that approach: the rules of the streaming game are about to be rewritten and convenient choices might just slow down the course towards fairness and integrity. The alternatives (Bandcamp, Patreon and Resonate for instance) are numerous, but it’s not about the “right streaming service“, as my colleague Norman previously observed, but about finding a way towards solidarity and sincerity. Art is not a commodity but hard labour and in that sense the platforms on which it is presented would be well-advised to value it as such. If not, the reckoning may be even larger in the future.

Want more of Andreas’ reflections? Head over to his For Folk’s Sake series right here. 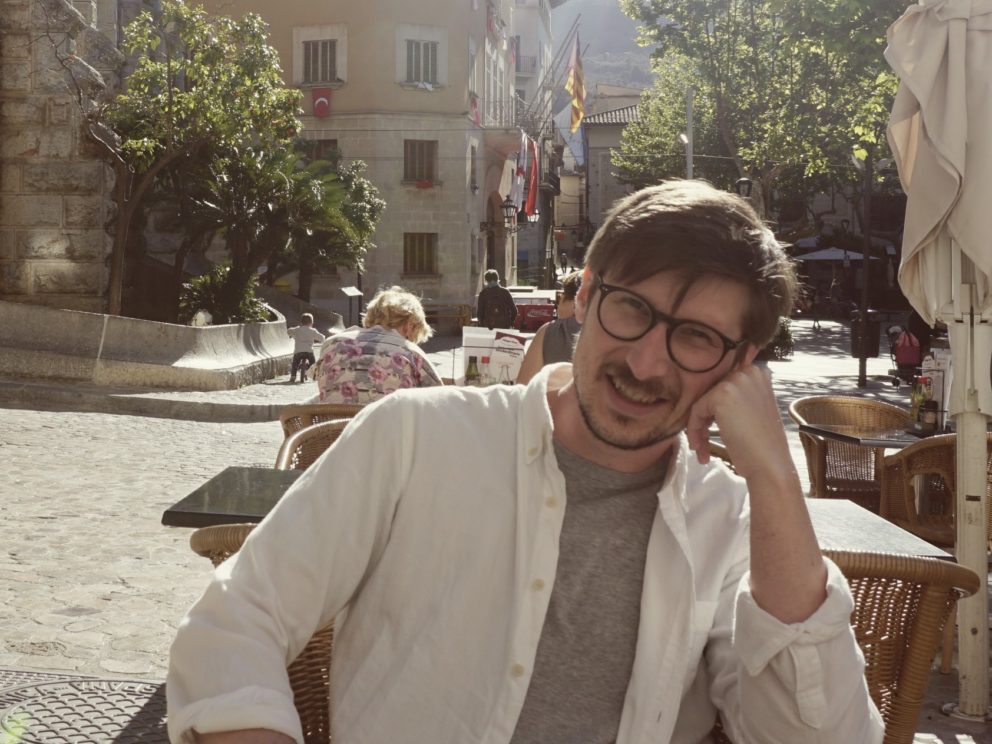