Dedicated Imperfection: Nelson Can Are The Passionate, Laid-back DIY Band We Need

In times of permanent availability of music of your favor, people tend to forget that it’s a product that actually someone wants to make a living by. And that it used to be quite normal, not very long ago, that you didn’t always get what you wanted, whenever and wherever you wanted it.

Nelson Can seem a little tired after playing a small and sweaty show the night before. But they are immediately in the moment when we sit down for a little chat.

Signe: ‘Yesterday was intense. It was crammed, so hot, I mean, literally no air! But the people stuck with us. That’s what we noticed about the audience and the delegates here at Reeperbahn Festival. They’re dedicated. And they give us  lot of great feedback. It’s very vibrant.’

That kind of response is not a given. Especially not when, as it turns out, the debut album from 2012 (!) of Nelson Can’s is unavailable on German spotify. Something that even the band wasn’t aware of. So basically, they are still an ‘EP-band’ around here. Does that bother them?

Maria: ‘Back then we just wanted to try out the album format. We wanted to show the world that we’re not just an EP-band. But by the time we released it we were just over it. If you compare the amount of money and time you put in albums and EPs and then compare the outcome: It’s not worth it. Not for us anyway.’

Signe: ‘We worked on the album very DIY and it was so much work it almost killed us as a band. You put so much energy in making it that by the time you finished it and have to start working it, you just run out of energy. That’s why we didn’t release it worldwide but we tried to release it in different territories. One after the other. Really, that DIY-thing keeps just nipping you in the butt.’

‘The EP format is very liberating for us. You don’t feel the same amount of pressure and get back to just make music again. No plans, no nothing.’ (Selina)

There is this thing you have to know about Nelson Can: By the time they declared themselves a band, they were lying. They had nothing worked out and panicked when they eventually came to perform songs.

Signe: That story’s all true, it was a lie. It’s like, sometimes in order to do something you have to pretend to do it already. Kind of like if you want to do a marathon, you start speaking about how you train for a marathon. That’s what happened there.

Selina: It’s also one of the reasons why we have no guitar in the band, because none of us can play the guitar.

Signe: We didn’t have a sound in mind. What we did was survival and out of that came a sound. Same with the band name, really. We just thought we would never make it so it wouldn’t matter. Nobody asks you why you’re named the way you are. Don’t worry about band names. Seriously: Red Hot Chili Peppers? Smashing Pumpkins? Don’t worry about it. At one time you just become that name. We’re not called Nelson Can, we are Nelson Can. Take a stupid name and own it.

While the guitar part might be true, Nelson Can tend to downplay their quality a little. They’re not as shabby as they describe their story. Bass player Signe definitely adds a guitar vibe to their sound, producing a heavy, distorted but melodic bass playing similar to DFA’s Jesse Keeler. In general, Nelson Can describe their ways in a very self-ironic (Selina wore an Aqua shirt on their show later that day), humble tone. But they’re serious about what they’re doing. They’re equal parts pragmatic, easy-going and dedicated. Not the worst mixture for an up and coming band.

Signe: Ours is also a story of how you don’t have to wait for things to happen. Just go out and do it. Especially in these days where everything has to be perfect. I feel like young people feel very restricted or not good enough.

Maria: Fake it if you can’t make it.

Signe: Fake it till you make it.

Selina: Make a shitload of mistakes.

Signe: We played live for over six years. At some point you just land in a position. We didn’t make a strategy for our performances but developed it over the years. On the other hand, yes, we all wear white on stage, because if we didn’t, we would all wear black (laughing). You know, you walk into dark clubs and every venue looks the same: black floor, black ceiling, black walls. If you wear black as well, you kind of melt into that. 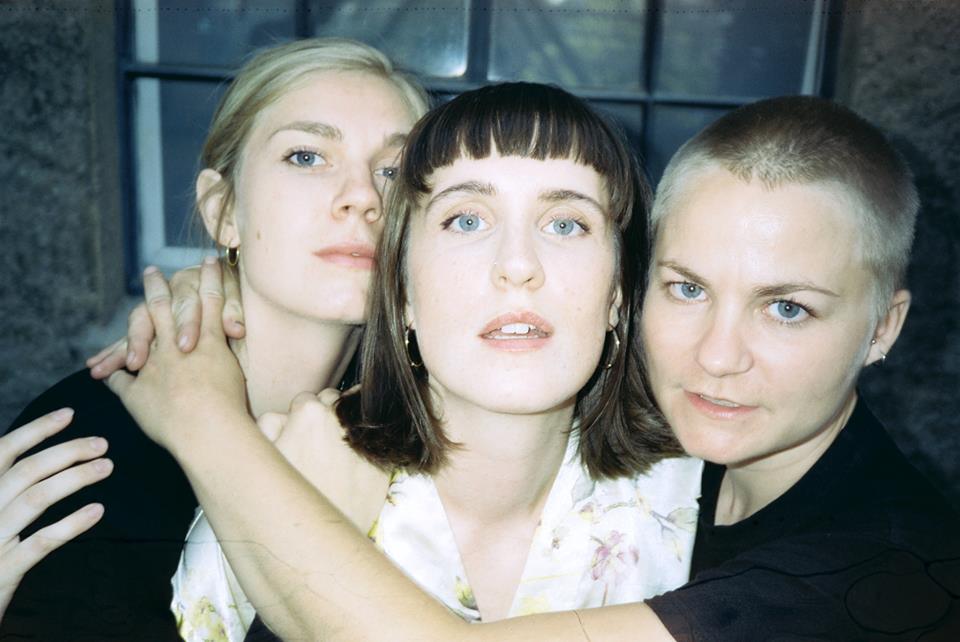 Nelson Can definitely are aware of their looks. Unfortunately, the analogue photos we took of them that afternoon in the backyard were stolen from our luggage (thanks again, asshole). So you have to take us by our word here that these guys are very aware of how to present themselves; also how to paint an image. But they’re not shallow about these marketing aspects. They’re just that: aware of them.

As an all girl band, these three are aware of other aspects of being in the music industry as well. Which was unavoidable when we came to speak about the Keychange Initiative, once again playing a big part in this year’s Reeperbahn Festival.

Signe: ‘I think a lot of the times this topic is very one-sided or single-laned. So my first thought would be: It’s not just the industry that has to make initiatives. It’s also the school systems, the media…it’s a society issue. I hope that the people who start these initiatives are aware that they also should support music teaching in public schools f.e. The likelihood that you’re going to pick up an instrument and go out there on stages when you’re 18 is low if you don’t make good early experiences with playing music in general. It’s important to teach children that they can be whatever they want to be. So if they want to play an instrument, they can do that. And you don’t have to be a boy to play the bass. And you don’t have to sing just because you’re a girl. And you don’t have to be a good at it. Just have fun with it. It’s important to play. Many of us are becoming adults too early. With all that said: It’s cool that the festivals try harder. And I think it’s necessary. But the fact that I didn’t even know this about Reeperbahn Festival is a good thing. Because it can bother you, to be honest. Oh, okay, are we booked because we’re good or because we’re women? It’s double-sided.’

Selina: ‘It’s never fun if you feel that you’re booked because of your gender.’

‘And I have to say that it’s also annoying that a lot of the time people want to talk to us about us being women in this industry instead of our music, our style, how we play…’ (Signe)

Maria: ‘If only, f.e. the bookers of Roskilde Festival would step back for a minute and think about that: Are we just repeating patterns right now or can we do better? Those kind of gatekeepers often are men and they just book that way.’

Signe: ‘Right. It’s more like habits. No one there is like ‘I hate women’. We were at a meeting this summer with some industry people in Denmark to work out strategies how to improve our situation in Denmark. They also talked about, not making quotas, but making strategies that force them, everytime they make a decision, to reconsider: What did we do to improve diversity in this decision? Not only concerning men and women but also other underrepresented minorities. I think everyone in the industry should have that in their strategies right now.’

Maria: ‘I think it’s embarrassing that there are festivals that don’t have any or very few women in their line-up. Because they DON’T think about it.’