Brexit and Beyond: Reasons, Explanations and a Wake-Up Call 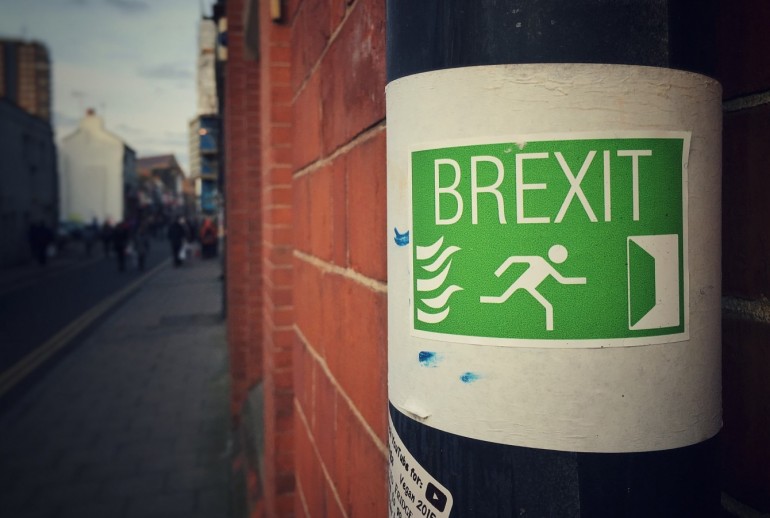 Well… fuck! Sometimes the first reaction seems to be most fitting one. It’s a strange feeling to be alive when history happened. Where were you when everything fell apart? Right here, right now. The United Kingdom decided to leave the European Union. Well, at least a bit more of 51 percent of it. The result is a resigned prime minister, an angry youth, a divided country (which might become even more divided once the Scotts are getting serious) and a democratic self-understanding on the verge of collapse. This is it. We’re in the middle of the hurricane, the middle of something that could be the end of everything or the start of something better. It’s decision time, for the young people and the future of Europe. The past has fucked with you long enough. But first, let’s just try to understand how we ended up here.

When you go down a bit on the demographic charts, it’s interesting to see how the vote is geographically divided. Northern England and Scotland massively voted to remain in the EU, while the poorest areas of England heavily voted to leave the EU. The North-East (the area around Newcastle), the Yorkshire (the area with Sheffield’s decayed industries and Leeds) and the Midlands were the most active actors for the leave vote. It is also the areas where you got the highest poverty and the highest rate of working class population. It is within these areas that the liberal shift starting from Thatcher onwards ravaged it all – re-read part of it in our Manchester vs Santiago feature. 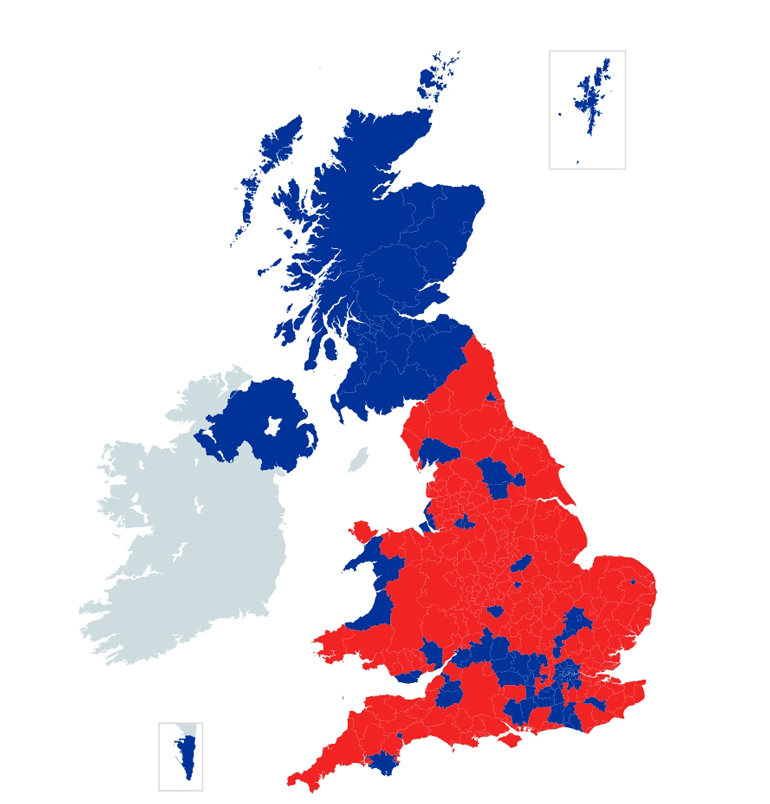 In an interview I had with JAMES HOLDEN, he told me ‘Growing up in the shitty midlands, I was really deconnected from an easy-access to culture‘. Here’s how Andrew Hung from FUCK BUTTONS speaks about his Midlands childhood:

Growing up in the Midlands and experiencing regular racism, never made me think it was a British problem. I do now. #eurefresults

What’s more disturbing is that the cultural actors from Northern England were silent during the whole campaign – and even today. If you look up to the main electronic curators from cities like Newcastle, Leeds, Sheffield or Manchester, you won’t hear much. Not that everybody should speak to that matter, but because culture is the best tool to fight against the lack of knowledge, it is sad that they didn’t even say what they had in mind just because it’s a complicated matter and could harm their business. Remember that in these areas, what we could consider as niche-culture in European mainland is much wider than that. Electronic music or Indie Rock music over there is a popular culture, therefore there were people to convince inside those cultures. The cultural actors didn’t take over the voice for it. One of the rare northern voices to be heard is Manchester’s Modern Love label (ANDY STOTT, MOVE D).

those years of austerity were worth it then

When you go in even more details about the chart. You see that all the major cities voted to remain in the EU, whereas all the countryland – deconnected from the universities, the education, the culture – voted to leave the EU. Even in the North, downtown Manchester / Newcastle / Leeds voted to remain in the EU. It is when you leave these areas, when you go in the part of England where there’s nothing, that you see why it voted like that. And another good way to understand this is to have a look on how people from each side think about certain topics or values: 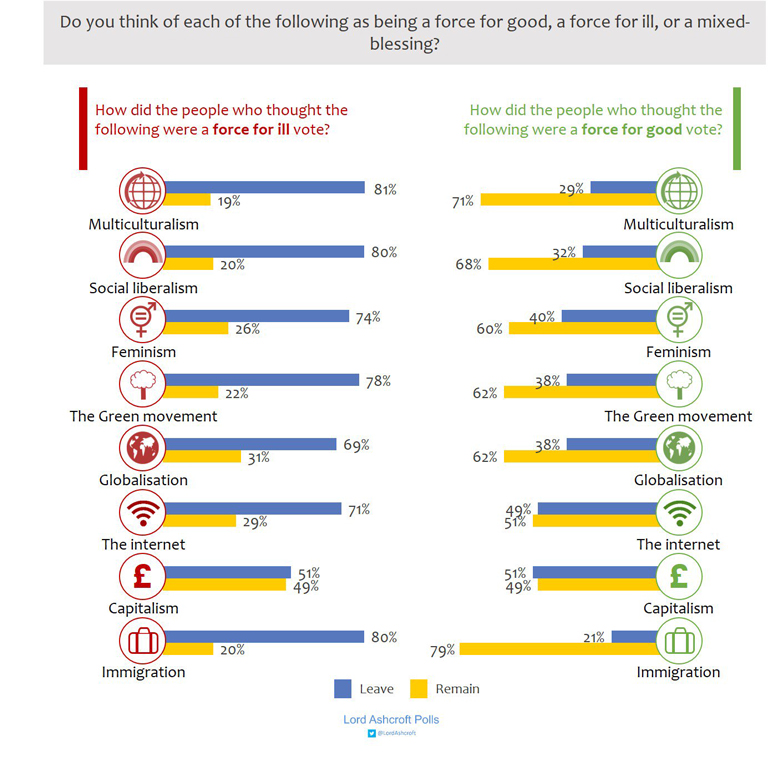 For that matter, we’ll let you hear the comment from JAMES HOLDEN on this chart:

the top left quarter of this chart is terrifying: if u think those things are bad i think ur a fascist. https://t.co/qXjNAsFWv6

That face you make once you realize you planned this whole damn thing entirely wrong and made everything worse. #brexit #byebritain #thanksfornothingdave

Reason 3: Because the youth voted remain but didn’t move to vote

Many polls over the last days showed that the youth – voters between 18 and 35 – were most likely to vote remain. These polls showed that the older you are as a british citizen, the more likely you would vote for the leave vote. While this is true, the youth is also the age category that most stayed at home when it came to voting. There’s definetely something as a generation shift, but the way that young people have given up on politics also engendered this.

Reason 4: Well, because David Cameron is a fool

I had always hope Cameron would resign over the pig fucking. This is a lot less fun.

Wake-Up Call: Where do we go from here?

That’s the question right now, isn’t it? Because most of you are rational, intelligent and reflective. At least, that’s what NOTHING BUT HOPE AND PASSION considers its readers to be, right? We’re not facing doomsday right now but we’re in the middle of an existential conflict that is slowly but steady tearing us apart. The older, narrow-minded and self-reflective part of this society who gained power by following the neoliberal path have used the original intention of politics and made it useless. The result is a large number of uneducated and uninterested people who are somehow helping to attack what is left of society. The young people – the ones who should form our future lost any interest in shaping this continent because they lost any faith in the institutions and the role of politics.

Entire generations have no more trust and therefore decided to resign. Well, at least us millenials. None of us ‘younger people’ understands that. The decline of values isn’t in our interest, it’s an established but frightened elite, greedy characters like Nigel Farage, Donald Trump and all those who use the people’s frustration and lacking intelligence to gain power. They are loud, dumb and aggressive; it’s their only way of keeping critical questions down. People are getting more intelligent these days, thanks to the internet and all the obvious mistakes politicians are making.

It’s end times for the elite and they are quite aware of that.

We discussed that before and we need to discuss this all over again. This is our future, they are taking and trying to destroy it. The age of unpolitical indifference is finally over – all you creative, hip and intelligent people: you can’t turn away anymore. Everybody needs to stand up. Your weapon is your mind and your voice. Speak to the people, your parents, relatives and whoever thinks that voring for the right-wing populists is a good idea. We’re facing a clash of generations here, similar to what happened with the riots back in 1968. This is our future and I’m truly sorry for sounding quite militaristic right here: but it’s about god damn time we start to fight for it. With reason, intelligence and your voice louder than ever before.