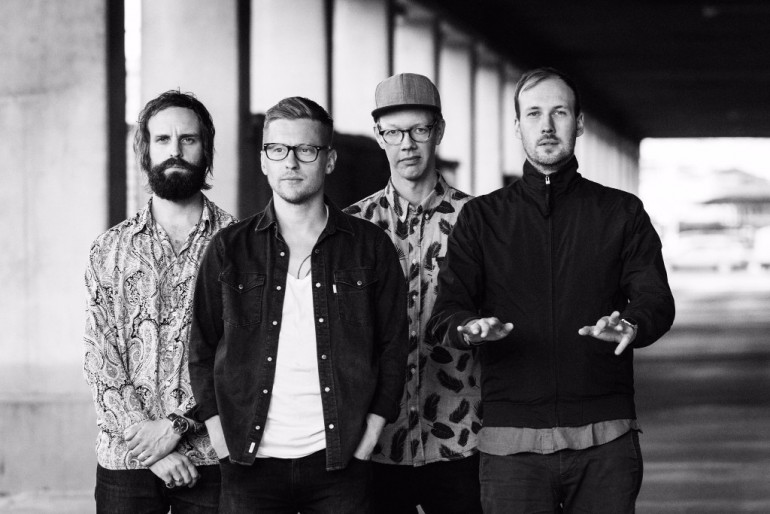 It’s a big question which might call for a big answer. How do you come back? In the case of Rasmus Kellerman and his band TIGER LOU bridging a gap of eight years between two albums turned out to be way smoother than you might thought it would be. ‘It feels weird in a certain way but I currently have a tendency to not think about it too much,’ explains the Swedish songwriter when I meet him in a fancy hotel in Berlin, close to where he used to live with his wife around 7 years ago. September 23 will see the release of The Wound Dresser, the first album by Rasmus Kellerman and his band mates Erik Welén, Pontus Levahn and Mathias Johansson since 2008’s A Partial Print. Following the release of that quite intense album the band was exhausted, empty and partly also disillusioned by the industry. ‘What got frustrating to me, was the discrepancy between doing music full-time, and making a living,’ explains Kellerman. ‘The only way to earn money through music, for me, was touring, and as I wanted to start a family, that just wasn’t an option anymore.’

Now, two kids and a couple of years later, he’s not regretting anything. TIGER LOU got back together in the summer of 2013 (back then Kellerman already talked with us about the first steps of that comeback) but took things quite slow. They needed one year to release a first new single, another one to come up with an EP and now – three years after start playing together again – a full-length LP finally arrives. ‘Making this album was a breeze,’ explains the songwriter with great satisfaction. He’s been lucky to work with exactly the people he wanted to work with. The band shaped The Wound Dresser step by step, next to regular day jobs and their families.

It’s that feeling of relaxation that is sensible all over The Wound Dresser. The predecessor was quite a hard and intense album, packed with frustration, heaviness and a certain dark vibe you couldn’t shake off. The new TIGER LOU full-length delivers the opposite, it sounds less forced, quite easy going and very bright, although there’s still a certain amount of darkness and melancholia in the microcosm of Kellerman’s songwriting. ‘The main difference this time around, was letting go of the constraints I had created for myself in the past,’ he tells me. There was no room for any dogmas while producing this one. ‘For this record, I tried to not think so much and let the music and words come about spontaneously.’ The credo for Kellerman was clear: ‘What felt good, stayed good.’ The Wound Dresser is about setting priorities straight and also accepting his own artistic vision. Rasmus Kellerman never stopped writing but he tried different approaches, ran away from TIGER LOU, only to find out that it is pointless. He wouldn’t become a shiny synthpop composer with 80s flair, his songwriting will always remain the core of this group. 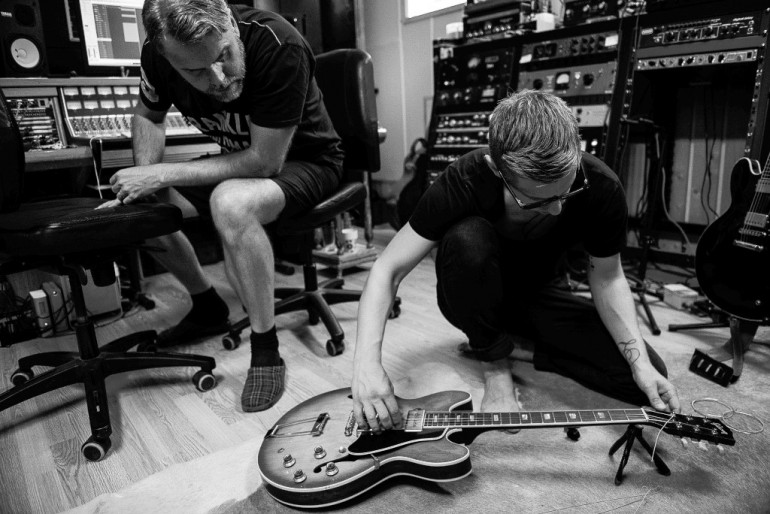 Back in the studio in the summer of 2015

‘The nostalgia element was endearing’

The sense of letting go and accepting your faith shaped the songs on The Wound Dresser, from the bright Homecoming #2 to the driven Undertow. The vibrant title-track is another example for this and also explains the title Kellerman and his gang picked for their comeback record.

‘You loose yourself in that moment, and you forget about everything else. It’s addictive. In a lyrical context, the title reflects the protagonist’s homecoming, and the redeeming effects it has on him/her. It’s definitely the theme of the record.’

The return of TIGER LOU also comes with a bit of luggage from those sweet days ten to twelve years ago. Songs like Oh Horatio, Sam As In Samantha or The Loyal gained the band a small but quite passionate following that also resulted in a mostly sold-out comeback club tour two years ago, especially in Germany where Kellerman and his gang have a really loyal fanbase. ‘The nostalgia element was endearing, mainly for ourselves to relive a lot of amazing memories,’ confesses Kellerman. He can’t stop thanking his fans enough for being part of the right. ‘On a personal, emotional and rational level, I am incredibly moved by the fact that my music have helped people, or that they’ve connected to it in some way or form,’ he tells me. Still, 2016 is not 2006 and the Swedish musician is strongly suggesting to open yourself up to the second coming of TIGER LOU. ‘We are a current musical entity, and the future is looking bright, dude!,’ he tells me in an enthusiastic way. Nostalgia can get in way, blur the lines between what was and what is. So, it’s best to experience The Wound Dresser with open hearts and minds, especially since Kellerman is far from being done in any form ‘I would love to continue and just keep recording new material but I’m afraid I have to ask my label for it.’

‘Why should people come out to see Tiger Lou play a show, in 2016? Is anything we do relevant at all? We did a few nostalgic-ridden shows, but that’s over now. There’s new music that we love, and hopefully people will love it too. I think the new songs are vibrant and fucking rad, and I can’t wait to share them with the world.’

The comeback story of TIGER LOU is also one about letting go, saying goodbye to false goals and finding a certain pragmatic approach towards the artistic vision. The band is no longer a full-time job for its members, it’s a luxurious hobby carried by their intrinsic love for music and each other but also the group’s loyal fanbase. They made it work aside all complications. ‘Once the kids are not breastfeeding anymore it’s easy’, tells Rasmus with a big smile. That acceptance also arrives just in time for his wife Andrea also reactivating her musical alter ego FIREFOX AK after five years of mainly being a mother. ‘Andrea really did a break from music’, explains Kellerman. ‘She wasn’t writing music at all for a number of years.’ But they both try to make it happen and are the living prove that you can combine these different words if you are a good team, support each other and find arrangements. Because in the end, a lot of those rock star things actually don’t matter at all. ‘Expressing any type of creativity isn’t more important that changing your kid’s diaper,’ explains the songwriter in quite a rational way.

‘For a long time, I stayed away from music, as I was sure I couldn’t do it full-time anymore. Then I thought: Why does it have to be full-time?. And here I am!’ 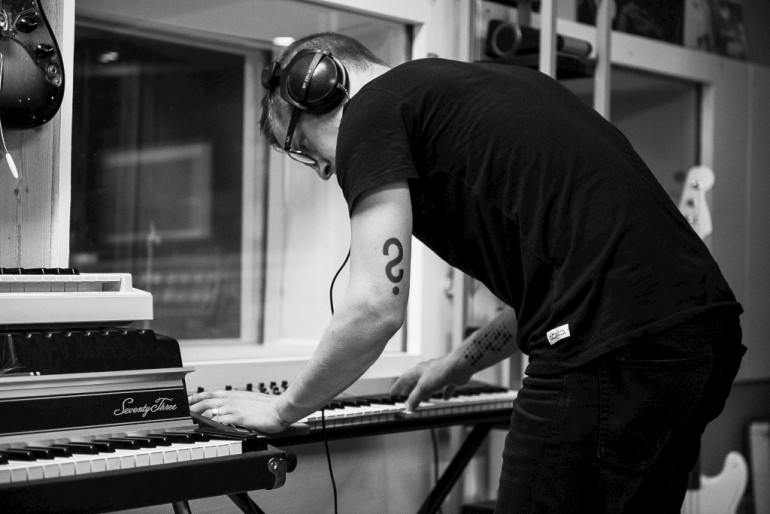 Rasmus Kellerman and TIGER LOU found inner peace by accepting a changing industry environment and rearranging priorities. The 24/7 rockstar model is a dying one and you can’t have it at the same time and start a family. Once you allow yourself to live with that fact, things will run smoother, that much he is for sure. ‘My advise to young musicians would be that you decide what type of artist you want to be, and do as much as you can by yourself;’ he suggests. He adds ‘Stay true to who you are, and the rest will sort itself out,’ not without saying ‘take that advice from an old man’ with another one of those quite relaxed smiles.

Nobody is willing to give anything up for TIGER LOU and that might be the main change when you compare the band to its state seven years ago. ‘If someone wants to book us for a giant US tour we would definitely decline.’ Kellerman and his gang learned their lesson and found a new way to channel their passion and artistic vision. The Wound Dresser is the musical testament of that change, a record that will please all old fans the same way it might attract a few new ones. So, how do you actually make a comeback (to answer the question at the beginning)? It doesn’t need a verbalised one. The relaxed smile of Rasmus Kellerman holds just the perfect answer for us all. Welcome back home, gentlemen!