The woman with the best name in music, Alexandra Savior‘s career has tended to walk down strange paths to date. The Portland artist found herself plucked up by a major label at a young age, placed in stasis for years before eventually emerging with her debut album The Belladonna Of Sadness, a dark, sharp album of creeping orchestral rock that lived in a underworld of strange people and emotions, written with Arctic Monkeys‘ Alex Turner. Belladonna was a great record, but maybe wasn’t the pop hit her label were looking for, and after it the Savior trail went quiet as she moved back to Portland and took stock. Happily, 30th Century Records stepped in to offer her a new deal, and she ended up in Brooklyn working with producer Sam Cohen on what would become her new album The Archer.

On The Archer, Savior paints with a wider palette of colours than ever before. Songs like opener Soft Currents and title track The Archer are simple, but bloom and grow into some of the most affecting she’s ever written. There’s plenty of songs that share DNA with Belladonna, like the strung-out and hazy Saving Grace, but things are generally lighter in tone, with pretty and playful tracks like Can’t Help Myself and looser, less conventionally-structured haunters like The Phantom and But You showcasing new sides to her writing. At the centre of it all, she’s still a compelling narrator and presenter of these songs, the voice that holds your hand and guides you throw her musical world (with lyrics that’ll hold your breath for you, like The Archer‘s scene-setting opening line “The earth went ahead and shook itself apart the very moment I laid eyes on you”). I spoke to Savior ahead of the album’s release.

At the end of the Belladonna Of Sadness campaign, you were dropped by your label and moved back to Portland and went to college. What was that period like? Did you question your desire to continue with music?

It was a slow period in my life, I spent a lot of time dealing with my depression, and trying to redirect my career and life into a place that made me feel comfortable personally, and artistically. I am constantly questioning whether to continue with music or not, because truthfully it is a difficult life trying to support yourself with music, and by releasing music you open yourself up to a lot of judgement and criticism. But, I continue with my career because I inevitably keep writing all this crap, and giving up means learning an entirely different lifestyle from what I’ve always known. Even if sometimes I scorn the industry, the music itself brings me satisfaction.

Did you also feel that that was also a time of freedom? After all, you had been in the major label system a long time, and it hadn’t always been smooth sailing, with Belladonna long-delayed before its release. Was the fresh start liberating in a way?
After I overcome the initial feelings of rejection and uncertainty, there was a period when I really started to trust myself artistically for the first time since I signed with a major label when I was 18. I was completely detached from the industry side of music, so I lost myself in my writing for the first time in a long time, so yeah I guess it was liberating!

The Archer was recorded in three weeks in NY with Sam Cohen, but how long and how had you been writing and accumulating the songs that would end up on this album?
Oh gosh, I guess the first tune I wrote for the record was HOWL in 2015, but realistically most of it was written in 2017 and 18. Creativity comes in spurts for me, so it can seem slow.

After spending a lot of time with the lyrics on this album, it struck me that the songs are more personal than on Belladonna. There aren’t really character sketches like Frankie and Girlie on this one so much, and the lyrical dialogue is more personal, a one-person narrative or between two people, rather than between people about others as on Belladonna. Would you agree with that assessment?
Yes, I think the lyrics are far more personal on this record. A lot of that had to do with my writing process, and my experiences at the time I was making the record. I felt a lot more comfortable writing on my own.

You said of this album “I felt like I needed to establish my own voice and show my independence again”. Did you feel that the downside of writing Belladonna with someone as famous as Alex Turner was that it tended to dominate the conversation around the record?
I went through my ups and downs with all of that. I don’t think I could have understood the ramifications of working with Alex, it could have gone a multitude of different ways. Before we started that record, I was a young and developing songwriter, and I saw working with someone with such an interesting writing perspective as Alex has, as an opportunity for me to learn as a writer. I didn’t understand at 18 what it meant to release a record, let alone to release a record recorded with someone so established, but in the end I understand why people ask me about him, I think that will lessen in time.

“I try to prioritise honesty” 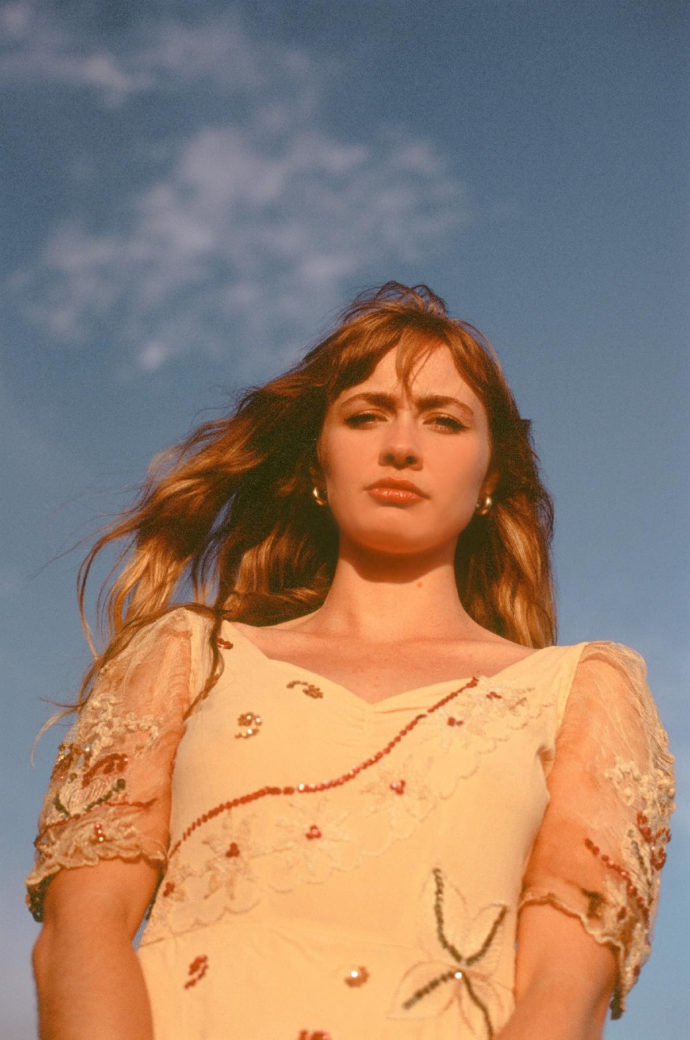 With the opener Soft Currents, and the closer The Archer, it struck me how simple the arrangement and production is on those two. Did you feel like they needed a light touch to keep their character, and what made them special, intact?
The arrangements of these two songs were kept simplistic because they’re quite emotional. When I brought them to Sam Cohen in November 2018, Soft Currents and The Archer were just iPhone recordings, and it just felt natural to keep them raw.

Your lyrics are always a notable part of your work, both for the melody of your words and the way you sketch scenarios and characters. What are the things you prioritise as a lyricist, and what’s your usual process for writing them?
Writing lyrics is my favourite thing about music because it’s challenging, it can be like putting a puzzle together. I generally start out with a chord progression on the guitar or piano, and then I hum around until I get a few melodies going. Writing words is really quite terrifying because sometimes it feels like everything has already been done. Generally, I try to prioritise honesty, if I don’t connect to the experience I am writing about, it is hard for me to perform that song live.

Overall, it seems like your vocal presence is quite unorthodox on this album. You’re sticking less to a consistent verse-chorus format on a lot of the songs, and instead tend to flit in and out of the songs with more freedom, and place your presence where you want it, and I think that lets you use it with more impact. Did you want to write in that slightly less structured way on this album?
Thanks for saying that! I don’t know, this whole record felt more like I was making a collage. My mind is very disorganised, that might be why things are less traditionally structured on this record. I wanted to let go of a lot of the perimeters I had built for myself as a songwriter, because overall that pressure to create something structured or ‘popular’ lead to me be less productive and more critical of my work.

If we take the title, The Archer, was that simply drawn from the lyrics on the title track, or does The Archer represent a bigger character in your imagination?
The title The Archer to me represents a character that is predatory in love, I wrote a lot about these sort of characters for this record because I’ve had a lot of experiences with predatory men in my life. And truthfully, astrology might have had an ounce to do with it …

If we take a look at your videos, a lot of the time you seem to be drawn to the kind of low-light, shadowy aspects of urban spaces and then the desert. What is it is about them that makes you feel they’re fitting visual spaces for your music?
I guess I’m drawn to those spaces naturally. I wish I could say I put more thought into it than that, I wish I could be a little more metaphorical here but really I just like the look of it all.

And finally, with the album out in January, can we expect to see you in Europe next year for shows?
Yes! Happy to say I’ll be touring Europe May 2020.

The Archer is out on January 10 on 30th Century Records.
LIVE