Some musical forces out there are meant to be. Beach House, for example. Ever since forming fourteen years ago, the duo from Baltimore has proved to magically create one album after another that beautifully seems to defy time and space without losing touch with the present moment. Following 2017’s release B-Sides and Rarities, Victoria Legrand and Alex Scally venture outside of their heavenly realm once again with their latest studio album called 7.

The album title echoes a simplicity and elegance Beach House effortlessly managed to capture with their music throughout their career. Not without adding a few more sonically unexpected turns to it all this time though. On the occasion of their recent press trip to Berlin, we skipped breakfast to start the day with an engaging conversation with Dream Pop’s most beloved songwriters.

Truly a day to curl up all by yourself. Loneliness comes to mind which is often associated with the number 7 as Victoria confirms: ‘Artistically, the number seven could be perceived as an object, an indivisible number. It’s a prime number. It’s lonely. It doesn’t have many possibilities in this regard. The idea of the journeymen comes to mind. It’s always been in my imagination and in my music, I’ve always had a bit of that vision of something. The universal figure that is going through something. That is going out on the road. You head west and rest on your own. It’s about that feeling of breathing something on your own or just being alone, isolated or lonely.’

Personally, the duo very much embraces the company of others though as Alex tell us: ‘I don’t think either one of us are loners at all. In fact, I really love people and society. All of my favourite thoughts and memories have to do with the joyful connections between people.’

‘The most time I’ve ever spent alone in life was probably making music, but you don’t feel alone because you’re pouring all of your energy into music as if it’s some other identity. Like being with a person and you’re pouring your thoughts at them.’ (Victoria Legrand)

Connecting with oneself in the first place doesn’t necessarily mean it has to be a quiet process. Sometimes, dealing with one’s thoughts and feelings requires something most people rarely do, but Victoria finds very helpful: ‘I talk to myself. I think talking to oneself is a very natural thing. I probably talk to myself more than other people because I did that as a child. That’s my way of processing life.’  Simple as that. You should try it sometime. Victoria adds: ‘I think everybody realizes at some point that it’s good to be alone because you have take care of yourself in order to continue giving to people because you do burn out. Being a musician to some extent in a public realm, you have to be private.’

Giving and taking – both mechanisms are naturally a part of making music. Emotions, encounters and thoughts are absorbed before they find their way into lyrical or sonic fragments again. Being songwriters and performers, Beach House constantly share the core of what moves them with one particular purpose that Alex describes to us: ‘I feel like it’s more give then take. It’s really pretentious, but I’ve always felt more like a highway or a coffee filter. We’re just a thing that the thing passes through and is altered. Maybe an electronic transformer.’

‘The reason why people would listen to us is because of the particular filter we offer of reality. That’s what our purpose is.’ (Alex Scally)

Far from a narcissistic attitude, Victoria adds: ‘Our music is like a prism. Something goes through it and it refracts into multiple shapes. Each person is attracted differently. Some people are drawn, others repelled.’

A cosmic mystery that is as fascinating as the feminine and masculine energies that the new Beach House record embraces: ‘The number 7 has many channels, possibilities or openings. I think everything is connected. It’s not just about the masculine or the feminine, it’s the passing through of everything through us. That’s more where the record is tied. Just describing the forces of things. The album cover is a woman’s face that’s made up of other faces. It’s not about this specific woman’s face or specific one woman, for us it’s about embodying as much as possible through the characters, the faces and all the other various images on the cover.’ 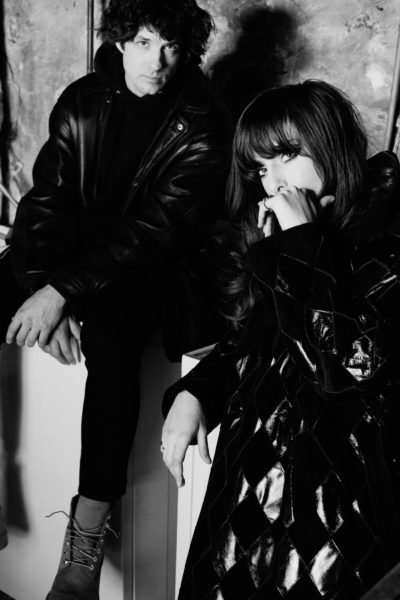 Alex Scally agrees: ‘I think part of being in this band together is obliterating the individual and making a mixed, androgynous kind of field so I almost feel like it’s an atomic level relationship with us. It’s the electron to the proton.’

Before heading into the studio again to work on 7, Beach House looked deeply into their archives and released B-Sides and Rarities – a collection of old favourites and hidden gems – which was a much needed step for the band along the way to move forward with new ideas as Victoria recalls: ‘We strongly feel that release was very important. We don’t want to hold onto all of our songs for fear that they are not good enough to put out in the world or whatever. It’s a part of the process. Releasing the records is like a deeply important cathartic part of the whole thing. Putting it out, giving it away and then you move forward or wherever. Sideways!’

Sideways? Exactly. ‘We didn’t have a good album order until we realized that ‘Black Car’ should start side B and made it all come into focus. Rhythm and beats drove a lot of this record’, says Alex while Victoria reveals more about the sound of their new album: ‘We thought that the range of things that are unexpected or turns throughout the record, the sequencing as well, was very lush. It’s like actual life in a certain sense where you don’t know what is going to happen tomorrow so you have to take that moment. ‘Dive’ is a little bit about that, too. That fleeting moment – if you go into it, you have all these possibilities. In that sense, there is the element of hope in the record.’

‘I’ve always believed that in the absolute darkest moment of one’s life, there is something maybe very, very small that is trying to get your attention and distract you from absolutely going into the void of blackness and darkness. You think it’s ending, but then it begins again. I firmly believe that.’ (Victoria Legrand)

The hidden truth. On this new album, in particular, Beach House mastered the art of intertwining many little details, sonically and lyrically, that beautifully reveal themselves layer after layer to one’s patient and curious ears. Leaving the surface behind and digging a little bit deeper in order to gain access to the full picture was  absolutely intended by the band, confirms Victoria: ‘I think one of the things we love to do as writers is to hide things in the songs. We put a ton of energy into a layer and then hide it. You have to listen to a song five times to hear it. For this album in particular, we really put a lot of secret information in the songs so when you listen to the record on headphones for the fifth time you suddenly discover a new sound.’

Alex points out a song like Woo, for example: ‘At some point in the song you have like three separate vocal parts chanting on top of one another. They are all put around in your ears if you listen they are all in different places. It’s almost like making out a single conversation at a busy café.’

Sometimes a trip to the museum triggers the same kind of reaction in Victoria which art lovers can surely relate to: ‘Some of my favourite experiences are when you go to a museum and just get immersed and you see the painting you’ve seen many times in your life, but every time you look at it you might notice something else. Is it because you’re changing? It’s insane.’

The changes visible on 7 may be subtle at first, but even more precious once you fully discover them. The trademark Dream Pop sound that Beach House continue to embrace on their seventh studio album and spice with just the right amount of sonic twists feels like a longing for something we are happy not seeing to be fulfilled just yet. Immersing into the layers of melancholic bliss and thoughtful observations instead that keep us longing for more.