How does the state of pure ecstasy feel like? Getting out of your own skin, forgetting the real world, being absolutely happy? There is probably no true answer to it because everyone is experiencing these moments differently. Although ecstasy might be a controversial title – as it can also stand for the uplifting drug – the British indietronica band Hot Chip decided to name their newest album A Bath Full of Ecstasy.

“The title is inspired by the song on the album ‘A Bath Full Of Ecstasy’. We thought that it was a fun and attention-grabbing title. Maybe it helps to sum up the way the album sounds: it’s a quite warm enveloping and generally positive sound that simply washes over you. There wasn’t a concept that we were following but I think we captured the mood of the record well. I like the idea that it creates this positive feeling”, says Joe Goddard, who sings and plays the synth in the band. The seventh Hot Chip album A Bath Full Of Ecstasy is indeed a warm and positive record and might make you forget everything around you for just a moment.

After 19 years of band history, the five-piece decided to try something new by getting two external producers on board. French producer Philippe Zdar (Cassius, Phoenix) and Scottish mastermind Rodaidh McDonald (the xx, Adele). This is the first time they are not producing their album by themselves. The outcome is catchier and generally more pop-orientated LP than former records. Especially Zdar, who is known for using multilayered synths, house kick drums, and a lot of compressions, added a special touch to the record. Unfortunately, one week after this interview Philippe Zdar passed away due to a tragic accident in Paris, giving the band’s words about him a bittersweet taste.

Felix: “Philippe was good at making us trust our instincts. He finds a lot of excitement and pleasure in making music and listening to it. This gives you a positive feeling about what you are doing and gets you excited about the result.”

Joe: “I don’t think it’s that easy to pinpoint this French touch thing that you mentioned. To generalize, French touch refers to this quite compressed, joyful house tracks associated with early Daft Punk and Cassius. Essentially, taking disco loops and then adding a massive house kick drum and a lot of energy and distortion. There’s also loudness and a lot of compression in the music. And Philippe did those things on some songs. Generally, though he mixes things to noisy dance records with a rock-tinge. So, I think it does have some of that French touch thing of course. But essentially, it is our music. He didn’t completely change the sound of the record we were aiming for.” 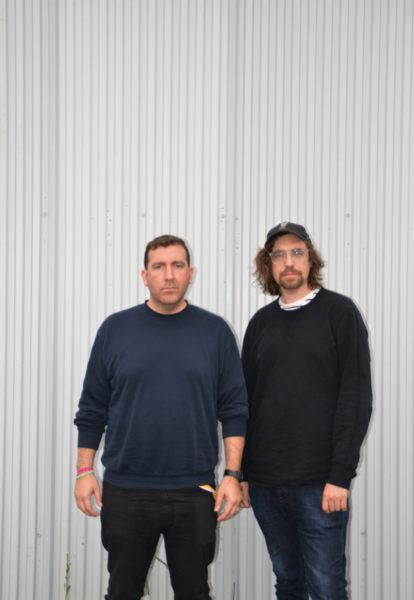 Joe and Felix at Maifeld Derby (Photo by Max Zickenheiner)

When it comes to the collaboration with Rodaidh McDonald, the two comment that, actually, he has just been a producer who was available at the time they needed to start working on A Bath Full Of Ecstasy. And luckily, the collaboration turned out great. He put the focus on the essence of the tracks, for example, by cutting the albums opener Melody Of Love by more than half.

Another pretty special aspect of the seventh Hot Chip record is the use of a wooden and polyphone Korg synthesizer from the 80s. Only a few of those unique instruments exist today and Felix and Joe were lucky to have had the opportunity of using one.

Felix: Philippe has got quite a big collection. It’s almost like a museum of synthesizers. The Korg has a unique sound and is  fun to mess around with because it has so many different features.

Joe: It is a really rare instrument and very in demand by synth-nerds. It’s like an Indiana Jones style search for the rarest keyboards. To have a go on a synth like that was exciting. But apart from how rare it is, it also just sounds incredible and we used it a lot for the record.

Unfortunately, they didn’t get the chance to take the rarity on tour with them, as wooden synthesizers are not easy to transport and might break on the road. But, don’t worry, they got enough other equipment to put in a hell of a show!

Many years have passed since the Hot Chip debut release Coming On Strong in 2004. But in their whole band career, they only had one number 10 hit in the British music charts: the catchy dance piece Ready For The Floor. Asking Felix and Joe about this number, they confess that they don’t consider it their best song.

Felix: I mean I think it’s definitely catchy but there are more interesting pieces of music, production, and writing.

Joe: Yeah, it’s got a good groove, but I don’t think it’s the best one. For example, I think ‘Flutes’ is a very successful song because it has a good momentum and a good dynamic.

Felix: I think ‘Boy From School’ is a really good song, too…

Joe: … and then for us there is like deeper, weirder B sides that we have quite positive feelings about on which probably no one else in the world would agree.

With it’s catchy, uplifting and danceable vibes Ready For The Floor would be a perfect fit for A Bath Full Of Ecstasy. Most of the album’s songs have the same catchy vibe and the potential to become the next indie dance hit. There is, for example, the opener Melody Of Love, which got its cheesy title for a good reason: the song gets instantly into your head, your heart, and makes you want to sing and dance along.

Some kind of kitsch

The Hot Chip band members are always hard-working (yeah they had a break over the past few years but every band member was engaged in other projects, like for example, Al Doyle went on tour with LCD Soundsystem or Alexis Taylor released more than one solo record). They already have played and will play many shows in different countries to promote their newest record.

Joe: “We really enjoy playing together live and also we love traveling as a group. So later this year we are going to the States, to Japan, around the UK, and then South America. Some countries there we have never visited before, like Peru. These are a lot of destinations that we would just absolutely love playing. And we want to make the most of touring this new album, which we feel like is a good record. Though, we will see if we can still stand each other by the end of this intense journey., ” says Joe with a mischievous grin on his face. And Felix adds laughing: “We should probably bring a therapist on tour.”

Let’s hope that the band does not take it that far after their tour so that the music world will not have to wait for another four years to indulge in Hot Chip‘s next catchy indie-electronic fusion.